Thanks for Visiting Mint
You seem to have an Ad Blocker on. Please turn it off in order to continue, or whitelist Mint
HOW TO TURN OFF AD BLOCKER
OR
REFRESH IF YOU ALREADY TURNED OFF THE AD BLOCKER
Home >Mint-lounge >In the next round

In the next round

In the next round 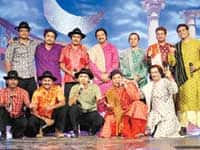 Several contestants on K for Kishore are from the East.

Albert Almeida, Sony’s business head, says the channel is pulling out all the stops to create a “pure" reality show. With help from music company Saregama India Ltd., the channel zeroed in on the dozen singers who have cut Kishore Kumar cover albums and sung playback to compete and “relive the Kishore Kumar magic". It will even bring Kishore Kumar fans to fill up the audience and get guest judges—apart from regulars Sudesh Bhonsle and Bappi Lahiri—such as Rajesh Khanna and the singers’ families.

It will be a similar concept for Champion Chalbaaz, where pranksters from around the country will compete to pull off practical jokes to impress funny men Cyrus Broacha and Sajid Khan. At the end of it, they will anoint the best Chalbaaz and the best Kishore Kumar—not the most popular—Almeida seems to suggest.

After several seasons of promising never to watch again after the best lost out to the most popular, I can’t wait to see what that would be like.

But this may also undermine why every reality show is now replaced by another one—making the genre a must-have for every general entertainment channel. “Audience engagement tends to be very high in these shows because viewers can actually SMS or call in to vote for their contestant," says Gowtham Ragothaman, managing director of Group M’s MindShare, a media buying and planning firm. “This engagement could be less if there is no voting."

He says that while they are popular, reality shows replace reality shows because the channels are stuck in a groove currently. He points out that ratings, while high, are not at the peak they were a few seasons ago.

While Sony and Star first ran music shows Indian Idol and Voice of India together, and then Jhalak Dikhhla Jaa and Nach Baliye simultaneously, Star Plus will now blink and replace Nach Baliye with mythological show Durga (Saturdays, 8pm).

“It is the show and not just the slot or genre that matters," says Prem Kamath, vice-president, marketing, at Star India Pvt. Ltd. “A good show will do well anywhere," he says, and points out that Prithviraj Chauhan, another weekend mythological show, is among its most popular shows.

But that doesn’t mean there is any reality-show fatigue. At least a couple of other reality-show face-offs are on television channels currently and, Kamath says, Star is open to doing more.

In fact, in the midst of the seeming sameness, there appear to have been a few new trends on the reality shows’ latest rounds. Ratings for these shows now fluctuate and a Bollywood celebrity coming on the show gives audiences a chance to see them as themselves and bumps up ratings for the show.

Also, there is more melodrama because melodrama works. So, it might be safe to predict more catfights and more of Mika and Rakhi Sawant ahead on this path.

Equally, stars use this as an opportunity to show a glimpse of themselves, apart from their on-screen characters. But they still stick to them enough to make sure the love for the virtuous or wronged soap character spills over into more text messages and phone calls that will save them. It is no wonder then that Jhalak’s winner and Balaji bahu, Desai, did an unfettered Brazilian samba and also declared she would not shed clothes to full effect on national television.

But with no audiences to impress, will we be rescued from the Rakhis, Mikas and bahu item girls? The verdict on that may be out this weekend.