Home >Mint-lounge >Features >Hunt for the next level

Hunt for the next level

Hunt for the next level

Saurav Ghosal is at an interesting cusp in his career.

Ranked No. 22 in the Professional Squash Association (PSA) world rankings, Ghosal is at a stage when he is competing with the world’s best players. Yet, the 24-year-old is in Mumbai this week, playing in the 58th Senior National Championship at the Cricket Club of India, where the next highest ranked player is Siddharth Suchde at No. 94.

The reason is two-fold: Ghosal lost early (to qualifier Borja Golan of Spain) in the Saudi PSA World Open last week and he “values" the Nationals—which he has won four times in succession—too much to skip it. Ghosal will be looking for a sixth overall title.

Ghosal recently moved up three places in the world ranking aided by a bronze medal at the Asian Games in China. This past year, he says, Asian Games, along with the Commonwealth Games, were the focus of his attention. By his own admission, he worked harder this year than ever before, which shows in the results, but this is just the beginning of what he needs to achieve—climb to the top of the world squash pyramid. 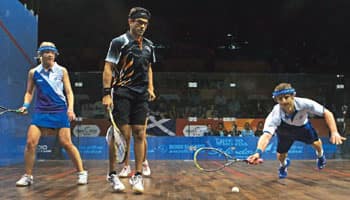 Ghosal (centre) has improved his ranking since the Asian Games.

“It’s like different slabs," said Ghosal, before beating Rushabh Vora in the first round of the Nationals on Tuesday. “The top two in the world are a notch above the next four, then the top 10 and so on. They are definitely superior at this point of time. It’s a strong tour right now, with the top six playing with ridiculously high skills."

Ghosal elaborates by giving examples: He describes the world No. 1 (Ramy Ashour, Egypt) as the most talented player ever; says Nick’s (Matthew, England, No. 2) got the “best defence"; Greg (Gregory Gaultier, France, No. 4) has the cutting angles; James’ (Willstrop, England, No. 5) has the volley drops; and Shabana (Amr, Egypt, No. 6) is the four-time world champion “legend". He says it’s an “education" to see some of them play.

“I have to keep adding to my game, take small steps at a time, evolve in skills and get mentally stronger. If you give just 5 minutes to one of these players in a game, the match’s over. It’s about playing the right shot at the right time, switching pace and resisting attacks."

Kolkata-born Ghosal trains under Malcolm Willstrop, James’s father. He says in the last five years, his game has grown not just thanks to the senior Willstrop, but also from practising with James. He has run out of sparring partners in India, the heat does not help nor does playing on courts without air conditioning, which affects the way one hits the ball. It’s the life of a professional, which Ghosal is getting used to a few years after completing university education.

Next week, Ghosal will be in Delhi for the Punj Lloyd PSA Masters, starting 14 December, which will have the world’s best 32 male players. Next, starting 8 March in Chennai will be the World Cup, which has been revived after a decade, and will be played in glass courts in a mall to attract a larger audience. “You get to see the world’s best players. Junior players can see where they need to be (in comparison) so they will not have a myopic view (of world squash). Look, winning the Nationals will not take you anywhere. You need to play at a global stage," says Ghosal.

But Ghosal still wants to win another Nationals even if it is difficult competing against friends such as Suchde and Harinderpal Sandhu (seeded No. 2 and 3, respectively), who also train with him in Leeds and live in the same building. “We are the three idiots of Leeds," he says, laughing. “We all know each other so well and are friends but then, when you step on the court, it’s business as usual."

Ghosal, according to National coach Cyrus Poncha, has another four-five years to peak in the sport, which he feels does not get its due in the country because it is still not part of the Olympic movement. Poncha says this is probably the best phase for squash in India, with more players in the top 100 rankings (including women) than ever before.

The change, he says, could come soon—if Ghosal manages to take it to the “next level".