Photo Essay: My land, your land

In late March, on a cool, rain-swept morning in Ameliya, a Gond Adivasi village in the Mahan forests of Singrauli, Madhya Pradesh, a former head of environmental non-profit Greenpeace India told me: “When we start a campaign, we do not think if we will win or lose. We think, ‘Does this capture a gamut of crucial issues?’"

Mahan does seem to exemplify the bigger challenge of social justice, environmental protection and development. In the months ahead, much will depend on how the Central and state governments address the issue of growing resource conflicts amid their plan to turn coal-rich forests and lands into mines.

Since 2011, Greenpeace has run a high-decibel campaign against opening up Mahan, one of India’s best sal forests, to coal mining. Mahan has been perhaps the most contentious project for an organization whose work in India ranges from issues of air pollution to sustainable agriculture.

The proposed Mahan coal block will destroy 1,200 hectares of the over 20,000-hectare forest. Until September 2014, when the Supreme Court struck down this and 213 other coal mine allocations, the mine was intended to fuel a 1,200 megawatt power plant built in the area by Essar Power Ltd.

In the absence of coal, the Mahan power plant is inoperational. Sushil Maroo, chief executive officer, Essar Energy, says the company intends to partially fuel the plant from the Tokisud North Coal Block (located over 400km away in Hazaribagh, Jharkhand), which Essar secured in a March auction. It will also look for more coal sources. “One has to balance ecological concerns with India’s need for commodities and economic development," says Maroo. “One way is for the government to look at the country as a whole, and say where mining can or cannot take place. Another way would be reforestation."

Coal is high on the NDA government’s agenda. For example, it wants the public sector mining giant Coal India Ltd to double production by 2020 to 1 billion metric tonnes. A May report of the Union ministry of coal says “the major challenges" to this include forest clearances and land acquisition. It says nothing about how it plans to address the issues. More than 80% of India’s proven coal reserves lie across central India, many of them in tribal, forested areas.

Greenpeace says it does not oppose all coal mining, but campaigns for a reduction in India’s dependence on coal, keeping high-quality forests out of bounds, and the implementation of forest and land rights-related laws. “The fact that the (Union) ministry of environment and forests recommended (in December) that the Mahan block not be auctioned because of the Mahan forest’s inviolate nature vindicates our stand," says Greenpeace India’s executive director Vinuta Gopal.

On 4 November, the Tamil Nadu registrar of societies, with whom Greenpeace India is registered, cancelled its registration. Maintaining that it had submitted annual returns belatedly and that its financial submissions had discrepancies, the registrar ordered Greenpeace to fold up within 30 days. On Friday, the Madras high court stayed the cancellation order.

Gopal says: “Our campaign on issues of forest governance and mining will continue.... We believe the courts and the Indian Constitution give us the right to speak on these issues."

A view of Essar’s thermal power plant from a village in Mahan. A July 2008 Union ministry of environment and forests report had noted that the Mahan forest has over 600 different species of wild animals. Over 500,000 trees would have to be cut for the Mahan coal block. In a July 2011 note on the mine’s forest clearance file, then environment minister Jairam Ramesh asked if it made sense to break up such a high-density forest and threaten its attendant wildlife corridors and habitats when the proposed coal mine could feed the power plant for only 14 years. In February 2014, the UPA government eventually cleared the proposal to cut 1,200 hectares of the forest for the mine. In December, the environment ministry said the block was located in inviolate forest. It has been kept out of the coal block auction so far. 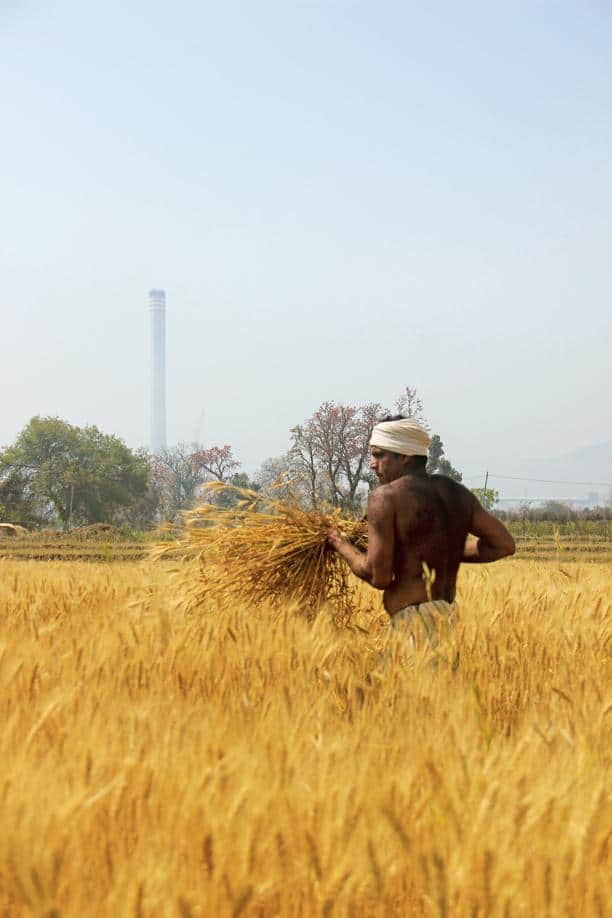 Wheat is the primary crop in the area’s villages, and sharecropping a common practice. Bhaiyalal Yadav is a sharecropper—the wheat crop he is harvesting will be divided equally between him and the landowner. There are no written contracts capturing such ties, only long-running oral agreements. Such informal economic arrangements pose a challenge for land acquisition, displacement and compensation processes, and generate insecurity in the minds of farmers about their future. ‘If there was an option better than farming, I would take it,’ says Yadav. ‘But there isn’t. So if this land is gone, what future do I have?’

Anita Kushwaha is among the village women active in the movement opposing the mine. A resident of Budher village, she was among the protesters outside the Essar headquarters in Mumbai in January 2014, was booked under the Bombay Police Act for violating public order, and spent a night in the city’s Tardeo police station lock-up along with 27 other villagers and Greenpeace activists. Ironically, Kushwaha’s husband used to be a contract worker at the Essar power plant. She shrugged off the seeming contradiction, saying, ‘He does what he has to. I do what I must.’ 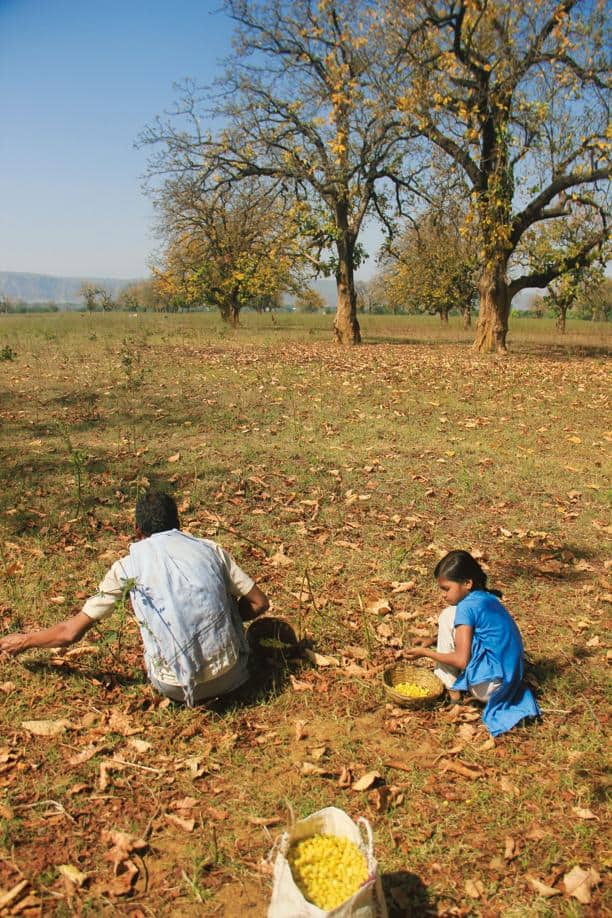 India’s forests are witnessing a battle between the competing paradigms of the Indian Forest Act of 1927 and the 2006 Forest Rights Act. British-era regulations sought to gain control over forests via the forest department, to enable the colonial state to meet its needs for timber and revenue in the project of empire-building. The 2006 law looked to rectify the ‘historical injustice’ of treating India’s forest-dwelling communities as encroachers in landscapes they have lived in for generations, and to recognize their traditional usage rights through forest right titles. ‘If you want to understand what the forest means to us, think of it as our ATM,’ a young villager, Hiramani Singh Gond, said in early April, as the area’s mahua trees were beginning to bloom. With the onset of summer, families harvest minor forest produce such as the creamy yellow flower of the mahua tree, selling it in local markets for ₹ 30-50 per kilogram.

Villagers of Mahan protesting at Ameliya against the government’s erstwhile land ordinance in March. On 15 August, the villagers passed a resolution demanding community forest rights under the Forest Rights Act—a claim they had filed over a year ago. Ameliya resident and schoolteacher Jaynarayan Sah says: ‘Whatever are our rights under the law should not be denied to us by the government. And they or the company should bring the mining proposal in detail to our gram sabha (village assembly), so that we can discuss it and give our opinion.’ Singrauli district collector Shashank Mishra did not respond to questions on the issue. The Union coal ministry has kept the Mahan block out of the auctions it has held so far, citing a December 2014 Union ministry of environment and forests recommendation about the block being located in ‘inviolate forest’. There continues to be a question mark over the future of the forest and the proposed mine.

Chitrangada Choudhury is a Fellow with the Open Society Institute.