The persecution of alleged witches in medieval Europe is one of those historical barbarities that popular culture has somehow turned into a subject proper for comedy. Recall the memorable sequence in Monty Python And the Holy Grail where Sir Bedevere asks the mob baying for a young woman to be burnt, “What makes you think she’s a witch?" “Well, she turned me into a newt!" says a peasant. “A newt?" A long pause. “I got better." “Burn her anyway!" cries the crowd.

The early chapters of Jeanette Winterson’s novel of medieval witch hunts, The Daylight Gate, have something in common with this ironizing tradition. An early scene—best left unquoted—shows us an adolescent rapist having his tongue bitten out by his far from docile victim. The fainthearted reader will stop reading at this point (such readers should be warned that there are gruesome scenes of torture in store), a pity because the violence is followed immediately by this affecting exchange between the putative witch’s accusers and her lonely defender: 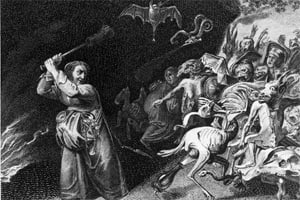 Burn them alive: A representation of the medieval perception of witches as malevolent, devilish forces.

Tom Peeper got up and dragged the maimed boy up with him. He pulled Robert’s hands away from his bloodied mouth. ‘You see this? What woman that is no witch-woman would do this to a man?’

‘What man that is a man would do this to a woman?’

The men did not reply."

Quietly, in the course of a single page of prose, Winterson makes it clear what sort of book we have on our hands. Not the festival of gore—male cruelty punished with female violence—promised us early on but something more richly textured.

Winterson does not use her witches as mere archetypes in some parable about McCarthyism. Her story is drawn from history, the Pendle trials of 1612 when nine women and two men were hanged for witchcraft, an event thoroughly documented by the clerk to the court Thomas Potts in his The Wonderfull Discoverie of Witches in the Countie of Lancaster (1613). Winterson supplements Potts’ account, when it is found wanting in detail or coherence, with the products of some riotous speculation: There is a fervid sapphic romance, a cameo from Shakespeare, and two from Satan himself. It is hard to offer much more in the way of plot summary for so short a book without depriving the reader of its special pleasures.

This is a slighter book in these respects, but it has some compensating virtues. One historical curiosity captured with great effectiveness is the peculiar symmetry between the two great paranoias of James I’s England: witchcraft, certainly, but also Roman Catholicism, the “old religion" to which his subjects clung in the face of royal persecution. A strange world is allowed to stay strange on the page:

“‘What is worse, sir? A High Mass or a Black Mass? To practise witchcraft or to practise the old religion? Both are high treason against the Crown. Witchery popery popery witchery. What is the difference?’

‘Are you saying that a Mass celebrated in the name of God is a profanity? Equal to the Black Mass of the Prince of Darkness?’

‘They are both diabolical,’ said Potts. ‘Treasonable and diabolical. ...’"

Catholicism survived the trials of the Reformation; witchcraft did not. Yet there once was a king who thought them equally subversive. The Catholics were allowed their voice eventually, though the Roman Catholic Relief Act would not come until 1829. The witches have had to wait longer. Campaigners petitioned the Scottish parliament a few years ago for a full pardon of the Pendle witches. Winterson’s readers will likely see the justice of the cause, for all the apparent eccentricity of the petition. Recompense for history’s defeated will as soon come from an act of the fantastical imagination as from an act of parliament.