Alok Kejriwal | From socks to software

Alok Kejriwal | From socks to software

I am waiting for Alok Kejriwal, a serial digital entrepreneur, at Gallops restaurant at the racecourse in Mahalaxmi, Mumbai. Clear sky. Green surroundings. Breath of fresh air.

I make a mental note to thank Kejriwal for his choice of venue as he walks in in a black T-shirt with a Star Wars logo and jeans. “I am late by 2 minutes," he says with a smile.

Kejriwal specifically requests table 14, which is a few yards from the race tracks. “I am obsessed with details," he says. “It’s a disease. Whether a hotel room or a restaurant table, I avoid trial and error. So I remember all numbers and locations, either it’s in my head or in my iPhone," says the chief executive officer and co-founder of Games2Win. 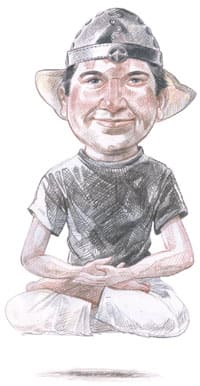 Tech guru: Alok Kejriwal wants to be an ‘incubator’ for aspiring entrepreneurs. By Jayachandran/Mint

“It’s all about being happy," he explains his enthusiasm for new ventures. “I love what I do. Age will catch up fast when you start hating what you do," says the 42-year-old, who in 10 years has never missed his daily meditation, inspired by the Art of Living Foundation.

As we settle for fresh lime soda and paneer tikka, Kejriwal explains his connection with Art of Living: “I am a spiritual, hippy Marwari. I am inspired by Zen philosophy. To me, the pursuit of money is noble. The way of getting money or the journey to money is important."

He says he is not interested in raising public money for his companies or in taking short cuts. “I look at the iPhone, FarmVille or Angry Birds with divine distillation. I love creating things from nothing. I am willing to do an unconditional Zen-like surrender to achieve that," he says, between sips of his fresh lime.

“I was born in a Marwari family. Entrepreneurship is in the DNA of a Marwari," he says in a mix of English and Hindi. Deftly mixing the tikka with gravy, he adds: “Money is literally the gravy that makes life tasty for a Marwari."

Kejirwal was brought up by his grandparents in Mumbai, who lived close to his parents. He recollects spending most of his time in the office of his maternal grandfather, L.C. Gupta, who ran a transport company, during his school days. Those days, he was also in love with science. “That was my only regret, I could not focus on studies (he was more involved with the business). You never know, I may have been designing space shuttles in Nasa (the US National Aeronautics and Space Administration) had I been a diligent student," he says, chuckling.

“The negative side of being born in a Marwari family is that your report card is your balance sheet and nothing counts beyond money," he adds.

In the Sydenham College of Commerce and Economics, Mumbai, where he studied accounting, Kejriwal remained smitten by the idea of doing business. At 21, he joined father Anand Kejriwal’s socks manufacturing company, Hindustan Hosiery Industries (the company wound up three years ago).

“I was fortunate as fate intervened with (then) finance minister Manmohan Singh, who devalued the Indian rupee, making my father’s sock factory export competitive," Kejriwal says, ordering a vegetable biryani after checking if I was okay with the choice.

The socks factory is also the place where Kejriwal had his first brush with technology. In 1990, Anand Kejriwal wanted to buy a socks-manufacturing machine from Italy and asked his son to check it out. The Italian manufacturer, Mauro Cecconi, invited Kejriwal to Florence to learn how to operate the machine first.

“Cecconi insisted that he would sell only if I learn," Kejriwal recalls. He was surprised when he was given just a chassis, not a machine, to work with when he flew into Florence. The idea was that if he learnt how to build it, he would know how to operate it as well.

Kejriwal considers this the first turning point in his life. The next came soon after when he started making socks with flowers imprinted on them with the help of the new, Rs9 lakh machine in 1991. His second discovery—creativity.

The third and critical twist came quickly. On just its fourth day in India, the machine stopped working. “It was unimaginable to fly down a technician from Italy. The manufacturer hinted that it could be an issue with the fan," he reminiscences. Kejriwal searched the website of Siemens AG, the company which had manufactured the fan. He found that he could fix it with a washer that would cost him Rs2. “That was the third—Internet. It was a holy triangle: Technology, creativity and Internet," he says.

Entrepreneur Kejriwal was born out of this discovery—and partly out of boredom with manufacturing, though the company managed to earn Rs27 lakh from the machine from Italy in the first year. The “holy triangle" started haunting Kejriwal when Sabeer Bhatia sold Hotmail to Microsoft in December 1997 for $400 million (around Rs1,856 crore now).

“You need something beyond the obvious to satisfy your intellectual meta level. I was desperately thinking how could I become Bhatia. Create something out of nothing," he says. “It was a Sunday in 1998 when, sitting in a temple, I found a newspaper advertisement for a contest to win a car. But the contest form was so small that I could not cut it through the scissor mark," he recollects. “The next day, when I could not find the paper, it became a trigger—an online contest platform."

Kejriwal used to get a stipend of Rs25,000 a month from his father—he would give Rs20,000 to wife Chavvi for the house and their daughters Anushka (now 15) and Amaya (now 11). He needed Rs5,000 for the investment and borrowed the money from his wife. “I registered the domain name and borrowed a laptop from my wife’s brother to show demonstrations. In a year, India’s top brands became my customers," he says. In 1998, private equity firms ICICI Ventures and eVentures, promoted by News Corp. and Japan’s Softbank Corp., a private equity firm, picked up a stake in Contests2win.com.

It was just the beginning. The second company, Mobile2win.com, was set up in 2003. Mobile2win.com managed to handle many contests and voting through text messages, including one of the most popular reality shows, Indian Idol.

In 2006, as the Chinese government started imposing restrictions on media, including mobile phone contests, Walt Disney wanted everything Kejriwal had. “I have a non-disclosure agreement with buyers. But we sold our company for six times more than what we had invested," Kejriwal adds.

He remains silent for a moment and then orders a Diet Pepsi with lots of lemon in it. “It was very, very painful. The company was created passionately. It is painful when a promoter himself is asked to leave. I was not allowed to start anything similar to Mobile2win.com. Even as the company was sold for at least 12 times more than what we had invested," he recalls.

A year later, the company was sold by the venture capital firms to a Chandigarh company called Altruist for a non-cash deal. “That says it all," adds Kejriwal.

“I got the cash. But I had to create something magical. I found out that my daughters are hooked to browsers for finding games. I got the trigger," recalls Kejriwal. With friend Mahesh Khambadkone, he founded Games2win.com, which is now one of the top 20 online gaming businesses in the world, according to the online tracking firm comScore.

Kejriwal’s company earned Rs35 crore in revenue in 2010-11, compared with Rs4 lakh in 1998. He wants to take its worth to a billion dollars.

Any regrets, I ask? “Yes," Kejriwal is quick to answer. General Electric was keen to invest in Contests2win.com just before the dotcom bust in 2000.

“I was ready. But General Electric revised the term sheet following the meltdown. I refused to agree. The decision was foolish, ignorant and egoistic. That stopped me entering the US market for the next 10 years."

“I am planning to float a fund for aspiring entrepreneurs. I am just telling them what Softbank told me years ago—come with your brains and clothes. We will take care of the rest," says Kejriwal.