Kanwar Gaurav Singh fell in love for the first time at the age of 14. The object of his affections was Mini Cooper. She did not have a curvaceous body, and was a decade-and-a-half older than him. But Singh says he had difficulty taking his eyes off her. “She used to sit on the porch of a house near my cousin’s place in Noida. I visited him often just so that I could get a glimpse of her," says the 29-year-old entrepreneur who runs United Himalayan Industry, manufacturers of energy-saving products. Singh is a neo-classic cars collector and he managed to bring home his first love—the 1968 Mini Cooper—after 12 years.

For the uninitiated, a vintage or an antique car or two-wheeler is not the same as a classic or a neo-classic vehicle. Novices tend to assume that the terms are interchangeable. Says Manvendra Singh Barwani, co-author of The Automobiles of the Maharajas, “In India, we consider cars and two-wheelers manufactured between early 1900s until 1939 as antiques or vintages; (those) manufactured post-independence (1946-47) until 1959 as classics and those made post-1960s as neo-classics." He believes that in the last five years the market for vintage, classic and neo-classic cars has grown by about 300%; within these categories, neo-classics are in greater demand because “the young collectors are interested in driving these cars".

It’s hard to miss the glee in Singh’s voice as he narrates tale after tale of how he went about acquiring each one of his seven neo-classics. What is harder to understand is why someone who can afford any of the latest car models would prefer in his own words, “a small matchbox-shaped car which looks like it was squashed because an elephant sat on it". While Singh does not always go around the countryside chasing “these beauties", relying usually on car dealers to procure the models he wants, he drove to Chandigarh to seal the deal for the Mini. “For the cars that I buy from cities other than Delhi, I usually ask the dealer to send some images, like I did for the 1967 Pontiac GTO I bought from Nashik. These cars are in a pathetic shape. But when in 2007 I heard that a Mini was up for sale, I decided to check it out. To be honest, I did not know it was the same car I used to lust after as a teenager."

He spent two days in Chandigarh persuading the owner to sell the car. “I listened to his stories about the Mini, what it meant to him, and even promised to buy all the spares he had before the deal was done. It was when I was checking the papers that I found that this was the same Mini from Noida. I knew then that the love of my life was back in my life. What are the chances of that after 12 years?" 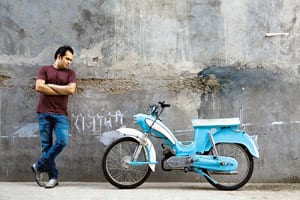 Chetan Malik with his 1939 Victoria Malik

What sets Singh apart from most vintage and classic car collectors is the complete rejection of the idea that these cars, once restored, should be preserved in a museum-like set-up and driven once in a while, mostly at rallies.

“In the last six-seven years, the collectors’ mentality has changed. The Muscle cars or the Sport cars (a term used to describe post-1960s models) can be driven around more easily than the vintages and that’s why younger collectors prefer these cars," explains Barwani.

“Cars, if not driven around regularly, perish. That’s why I have decided that I will not buy more than one (neo-classic) car at a time. I want to necessarily drive the car that I have painstakingly restored," says 28-year-old Abhimanyu Singh Rana, the owner of a 1966 Chevrolet Impala (four-door version). He runs Route 04, a restaurant in Khan Market.

In the two years since he bought the car, it has been damaged twice during restoration. “Once, the mechanic accidentally broke the original windscreen and the second time, during a squall, a branch fell on the car." Then Rana started spending some part of his day at the garage, which is near his restaurant, to check on the car’s progress. “You cannot leave the restoration process to the mechanics. They are not used to repairing these cars and Delhi mechanics are always on the look out to do jugaad (improvisation) rather than waiting for the right part to come along," he says.

To ensure mechanics didn’t take shorts cuts, Rana read up on the car’s history and its under-the-hood machinery, and insists on buying the spare parts himself. “Restoring the car is part of the charm of owning these cars," says Rana.

It’s a sentiment Ankur Bhatia, 37, executive director, Bird Group, endorses. Bhatia owns two vintage cars and four neo-classics, of which two—a 1972 VW Voyager Beetle and a 1962 Mercedes 190 Ponton—are under restoration. And while he does not really drive them around as often as he would like to, he keeps tabs on the restoration of each and every car.

Like Singh, he does not believe that he has to be physically present during a car’s purchase “because most times the car is no more than scrap metal. They are damaged beyond recognition. Besides, I know the models I want to purchase and the price I am willing to pay for them. If a dealer has images of the car and can work out the purchase on my terms, I buy the car and get it towed to Delhi."

But when it comes to restoration, he trusts only the Krishna Motor Garage opposite his office in Connaught Place, New Delhi. Bhatia says he often ambles down two floors from his office and goes across the road to check how the restoration work is progressing.

Like Rana, he also reads up on the car’s history and hunts for spare parts online rather than letting the garage owner buy them on his behalf. “The most frustrating part about collecting and restoring cars is the time it takes to get an immaculate job done. You have to wait for at least a couple of years for the car to be up and running if you are particular about wanting original parts," he says.

Inside a collector’s mind

Bhatia got interested in collecting and restoring vintage and classic cars after he inherited a 1937 Austin Cambridge. “The car belonged to my grandfather. No one else in the family except me, and my brother to a small degree, were interested in the car after him." Bhatia’s interest in vintage and classic cars grew when he got involved with the Heritage Motoring Club of India.

Singh and Rana, who are cousins, have been crazy about neo-classic cars since their teenage days. Singh says his interest in classic cars blossomed during school days: “Movies such as American Graffiti and Dharmatma (actor Feroz Khan drove a stylish white Mercedes SL convertible in the latter film) left an impact."

Rana attributes his love for cars to his father. “My father owned a Standard 2000 in the late 1980s and he used to spend hours on it. He used to always say that the Standard is a Xerox of the Ferrari."

Rana confesses he has a weakness for big, flashy cars rather than the sportier American versions his cousin prefers. In fact, he opted for a 1966 Chevrolet Impala for this very reason. His car, purchased two years ago, was once the official car for former president Giani Zail Singh. Rana claims he bought it from a family in Punjab that owns the Verka brand of dairy products, but when the car was sold to him he had no idea of its illustrious history. “If I had known the pedigree of the car, I may have paid more. For many people who buy these cars, the history of the car does not matter, but I find it fascinating that my car once served the president of India."

Bhatia feels the history of the car affects the buying decision more in the case of a vintage, and not so much in the case of a classic car. “Most owners of vintage cars are aware of the history and less likely to sell. These are cars that belonged to the royal families," says Bhatia. But classic (or neo-classic) cars are usually in a shambles. “Scrap dealers sell them off part by part, so it is difficult to really know much about the owners," adds Rana.

According to Barwani, the market for these classic cars was small till about five years ago. “Nowadays, anyone with money can buy a new car model, but buying and restoring an old car shows class, and Indians are image-conscious. They believe owning a classic or a vintage car adds to their style quotient," he says.

Dealers are aware that interest levels in the post-1960s car category have gone up, and they’ve hiked the prices of these cars. “Earlier, you could buy a rusted post-1960s car for as little as Rs30,000, but now the dealers ask for as much as Rs3 lakh because the number of buyers vying for the same car have gone up," says Barwani.

Recently, Singh says, he refused a dealer who wanted to sell a “dilapidated 1967 Ford Mustang for Rs19 lakh. I would have had to spend almost the same amount to refurbish it, and at Rs40 lakh, that car would have made no sense even though I desperately want to add a Mustang to my collection." Singh, who has started encouraging friends to invest in these cars, says: “If you go out to buy a fully loaded modern sports car, it will cost you at least Rs50 lakh-plus. A classic car, even after extensive overhauling, will be about Rs20-25 lakh. And it will be a head-turner."

But sparing Rs20 lakh for “what most family members and friends call junk" is not easy for Chetan Malik, chef and owner of Café Style in Noida.

Malik’s fascination for vintage and neo-classic cars began in 2007 when he inherited an old 1947 Morris Minor car from a maternal uncle. The car, lovingly restored by Malik, now sits in his restaurant’s porch and is driven around the market block in Noida once a week.

However, since buying and restoring neo-classics is not an easily affordable option for him, Malik decided to start his collection of vintage and classic vehicles with two-wheelers. At 28, when most men hanker after Ducatis and Yamahas, Malik spends hours scouting for derelict two-wheelers in ramshackle garages in Meerut, Bulandshahr and Muzaffarnagar in UP. Once he spotted a Java, a Lambretta and a Victoria in a garage en route to Meerut. “I asked the owner to sell the 1931 Java motorcycle. He refused, saying it will stay with him till the day he dies. He wanted too much money for the 1972 Lambretta but it seems he knew nothing about the 1939 Victoria moped and sold it to me for Rs7,000."

Malik believes the moped to be one of the rarest pieces in the country since very few of these German two-wheelers were exported to India in the first place.

Malik is willing to wait. Sometimes, he gets a lead about a classic bike or moped or a car in a small town in UP. He doesn’t mind going there and talking to the owner to find out if they are willing to sell. “If the real owner of the vehicle is alive, the chances of buying the vehicle are very low because there is always a sentimental value attached," he says. But once the kids get the vehicle, they usually see it as a piece of junk and are eager to get rid of it. “Sometimes, you just have to wait for the real owner to pop it, in order to acquire the beauty you want," he says matter-of-factly.