The people of Bundelkhand are adjusting themselves to yet another drought. The 13th in the past 15 years. Images from the drought-hit villages

The people of Bundelkhand, a chronically drought prone region spread across 13 districts in Uttar Pradesh and Madhya Pradesh, are adjusting themselves to yet another drought. The 13th in the past 15 years. But this year the situation is worse as many families have lost their cattle due to an acute shortage of fodder. A non-functional public distribution system means households have cut down on meals. Pulses are milk are unaffordable luxuries. In most villages, locked homes are a common sight. Entire families have moved out to work as labourers, leaving behind the old to fend for themselves. The government is invisible except for the occasional tanker supplying drinking water in parched villages. 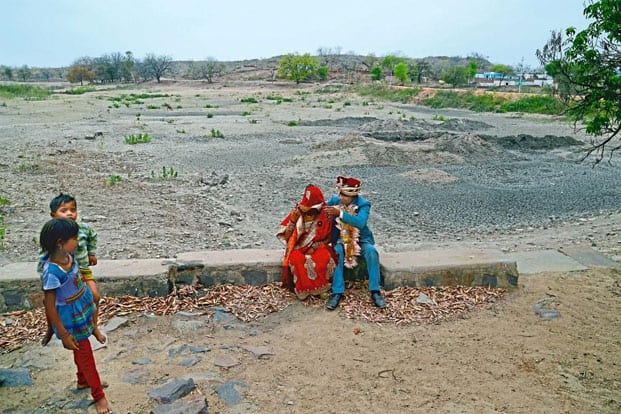 Lalitpur, Uttar Pradesh: Satyendra Ahirwar, 19, took a break from his job as a construction labourer in Noida, on the outskirts of Delhi, to get married in his village. He began working when he was 15. His bride will soon join him. In Bundelkhand, distress migration is a way of life. A traditional Chandela tank, now bone dry, forms the backdrop for this photo-op of the just-married couple. The dug-up patch in the middle of the tank shows a failed attempt by villagers to get water for their livestock. The region had nearly 12,000 such structures for conserving rainwater but only 1,300 exist today. Lalitpur: Basanta Sahariya, abandoned by his children, has to fend for himself by working as a labourer under the rural employment guarantee scheme, in Chhipai village. Due to his age, he takes frequent breaks. His khaki uniform, he says, was a gift from a forest guard. Lalitpur: Most families from the Sahariya Basti in Raipur village do not have a ration card that can get them subsidized food. A few, like this elderly woman (near the hut), received a special food packet from the state government. The supplies come in a red-and-green carton with chief minister Akhilesh Yadav’s photo displayed on one side and a letter from him assuring that the “government will not let anyone fall prey to starvation" and suggesting “families that received the food packets should share it with others". Lalitpur: Anjana Sahariya, a mother of five, says her children are chased away from the local anganwadi (childcare centre) because they come from a poor tribal family. Sahariya depends on the generosity of a relative for food and shelter because her husband is a migrant worker and has not been home since November. She has an above-the-poverty-line ration card that does not entitle her to subsidized food. 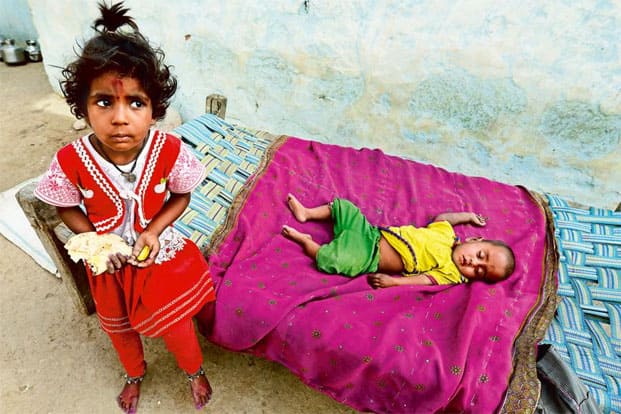 Mahoba, Uttar Pradesh: Six-year-old Sangeeta’s frugal diet consists of a roti (flatbread) with a piece of mango pickle. Sangeeta’s grandfather, Dhan Prasad Anuragi, lost his cow to the drought a month ago. The cattle died of hunger. For Sangeeta, this means milk is no longer part of her diet. Mahoba: Ramcharan Khuswaha, a small farmer from Karharakala village, sits next to a dry village well. He borrowed Rs70,000 from a moneylender to get his daughter married to a daily wager. She will soon migrate with the groom, who is a construction worker.