Alittle before midnight on 30 April, Shraddha Sharma uploaded a YouTube video of her singing, with a guitar accompaniment, a teary song of separation dedicated to “a special friend who was leaving her forever". It was recorded on her parents’ living room sofa. She sang Rahat Fateh Ali Khan’s Mein Tenu Samjhawan from the Punjabi movie Virsa.

Five videos and 16 weeks later, in the third week of August, Shraddha’s YouTube channel, Shraddharockin, became the highest subscribed channel in India. Her videos have had more than two million views in all. At the time this went to press, her month-old Facebook page had 44,301 fans. Three fake pages had about 10,000 each.

Shraddha, savvy songstress, YouTube phenomenon and Facebook celebrity, is a schoolgirl from Dehradun. She is 15 years old, and has never travelled beyond New Delhi.

She has just returned from school when we meet her. After a 6-hour drive from Delhi, we didn’t have trouble finding the free-standing house: The Sharma residence has a board at the gate advertising classes in Hindustani classical music. Shraddha’s mother, Kusum, is a music teacher who has trained her daughter since she was 9. Born after two sons, both of whom have now moved away from home, she is the centre of her parents’ lives. Their house is named “Shraddha". Her parents moved from Meerut to Dehradun, and bought the house around the time their daughter was born. In the clouds: Shraddha on a neighbour’s terrace in Dehradun. Photo by Priyanka Parashar/Mint.

But Shraddha’s appeal isn’t limited to her melodious renditions of movie songs, as the comments under her videos—like “You r reallllyyyy ROCKSTAR" and “You are too cute and like my first love"—suggest. Her self-taught guitar skills are fledgling. But with her waiflike frame embracing a guitar, and the sincere dedications that precede each song, she’s a one-girl performing package. The songs she picks for her “special someone"—a friend who lives in New Delhi—are all love songs.

It was with her fourth video, an upload on 16 August, that her videos went viral. Haal-e-Dil, a song from Murder 2, has had more than 700,000 views. A Web trends blog, Articoblog.com, that picked up on her Internet statistics, reasoned why: “...after watching these videos everyone is so mesmerized by her voice that every listener prays that (the pain of) her long-distance relationship ends soon." 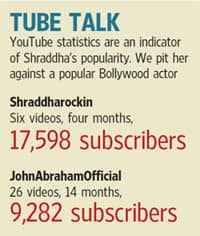 Shraddha has been shortlisted for television talent shows in the past, including Sa Re Ga Ma Pa and India’s Got Talent. But she didn’t make the final cut. Now, she is decidedly against television. “We never understand how the selections work, and I don’t want to put her through that," says her mother, who is doubling up as her agent these days, speaking with event managers from as far and wide as Toronto, Canada, and Pakistan who’re requesting live gigs through Facebook. Shraddha has her goals somewhat set. She wants to perform and eventually, compose her own music. “I don’t like playback," she says, “Everyone does playback."

Shraddha is wearing her newfound popularity well. Her sign-offs on Twitter are now eminently Bollywood-worthy: She is sometimes “sorry to disappoint fans", and at other times “thanking them for their support". Because of the demographics of her Twitter followers, her Twitter handle @shraddhasharma6 now shows actors Priyanka Chopra and Deepika Padukone as “related".

The makeshift ethic of her first video has metamorphosed into better-composed frames. The sound quality is clearer. So far, Shraddha has been recording everything on an iPhone, a gift from her elder brother. She takes us to her parents’ bedroom, where the family’s PC lies neatly covered with a bedsheet. “It’s old-fashioned," she says, blushing. “I want to buy a laptop and an HD camera with my first earnings."

How much would those cost? And how much would she be paid? Shraddha doesn’t know, but she’s researching—on the Internet.

Shraddharockin has hit the low notes too. Earlier this week, she was broken down by a slew of hateful comments by online viewers who didn’t believe she played the guitar. While her first few songs were recorded in one or two takes, her most recent took six. She got nervous.

YouTube has helped teen aspirants in the past. Seventeen-year-old Canadian pop star Justin Bieber was discovered on YouTube when he was 13. But when it comes to young online celebrities, one cannot forget the terrible case of the 11-year-old American Jessi Slaughter, who was tracked down and harassed by trolls from the seedy underbelly of the Internet.

Shraddha’s family is unconditionally supportive of her efforts. So is her “special someone" who, as it turns out, didn’t leave her forever. She is scheduled to perform at IIT Delhi’s annual festival, Rendezvous, next month (21-24 October).

Her “About Me" on YouTube says “music is mah soul". And like her father, Anil Kumar, an employee with the telecom company BSNL, says, they’re not the sort of parents to take their children away from the things they love. “She’s always been a good student and we’re trying to make sure that it stays that way. Balance...is everything."

Shraddha’s mother has a story that at six months old, Shraddha would move her feet to radio music. “We’ve always had her singing around the house, so this isn’t as new to me as it is to you," she explains. At home, they call her Bulbul, after the songbird.