Home / Mint-lounge / The mall and the city
Back
Share Via

The mall and the city

The mall and the city

The mall is a relatively new addition to the places that shape the Indian city. Being a closed box, it goes against every tradition of urbanism, especially of marketplaces in India. And even though we know it would have been out of place in life as we knew it till a few years ago, few can resist the charms of the big air-conditioned cocoon that complements the air-conditioned ensemble of bedroom, car, office, hotel and bank. We love (and often unknowingly hate) the way it puts us out of touch with the city—any city around us. Is there a choice? Appropriately, it is the little things that crop up most frequently as he discusses the Salt Lake City Centre, completed in 2004. Like the decision—taken in the face of serious scepticism from the client—not to put a gate at the entrance or build a compound wall. Or the effort to ensure that a strategically located shop within the mall was sold only to a restaurant.

Small things such as this reinforce the overall spirit of generous urbanism underlying the design concept. A Bengal Ambuja project, this mixed development is spread over 6.5 acres, with a built-up area of 550,000 sq. ft. The design concept includes a residential block of 60 units behind the sprawling shopping centre and office complex. 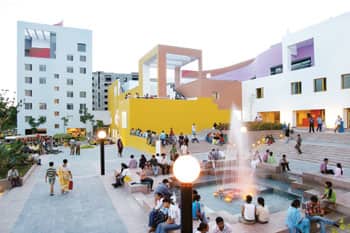 The courtyards mimic the social experience of a marketplace. Charles Correa Associates

Correa was among the early modern Indian architects to derive inspiration from the sociable local architecture of traditional towns, houses and streets. At the City Centre he disaggregates the mall into an arrangement of commercial blocks (with shopping below, office and other spaces on upper floors) that form different kinds of “streets" and courtyards in the interstitial spaces of the complex.

Shops open out to these pedestrian spaces that are wide enough to accommodate a crowd but not so wide as to snip the subtle bonds of community with others sharing it—a tension that animates every traditional marketplace. ‘Streets’ inside lead up to higher levels. Charles Correa Associates

A sense of inclusion

The agenda of a mall is essentially an exclusive one. It is a space in which the chaos of the city is kept at bay and a manicured space created so that the business of consumption may be conducted in complete, if illusory, comfort. While that core agenda could not be entirely subverted in a commercial project, Correa chose to approach it from the other end. “I said let us make an enjoyable public space leading up from the street to the air-conditioned shopping areas," he says. Correa’s felicity with theatricality is central to the success of the public space. The architecture itself thrives on fundamental contrasts expressed subtly. The building seems to advance and recede alternately in a beguiling rhythm. Largely a backdrop to the terraced open space by the street, it suddenly grabs attention with a big, bold cut-out in the wall, high up in one corner.

But it is again the small things that make the space truly engaging. Like the tramcar in the open that has been converted into a gift shop. Or the fact that people look good in the large open space. Whether they are sitting alone, as couples or as groups, they look as if they were meant to be there; their presence seems to enhance the design. The way the space receives their presence, with grace and generosity, is finally what secures the success of the mall in becoming as public a space as possible.