Historians, like monarchs and statesmen, are always looking to expand the territories under their command. Rajmohan Gandhi, now in his 70s, and arguably the most prominent Indian historian in English today, has over a long career written excellent biographies of Vallabhbhai Patel and C. Rajagopalachari, a survey of Indian Muslims called Understanding the Muslim Mind, and a wider study of South Asian history called Revenge and Reconciliation.

Gandhi’s last book, a magisterial 700-page biography of Mahatma Gandhi (2007), took him out of India to South Africa and England, the two countries where the Mahatma put himself together intellectually and morally. Now, in his latest work, Gandhi touches down in the US for the first time. A Tale of Two Revolts is a comparative study of two rebellions that occurred at opposite ends of the globe in the 19th century: the Indian Mutiny of 1857, fought over issues of religion by soldiers against an imperial power, and the American Civil War of 1861-65, fought over issues of race and law by governments, civilians and finally, armies. 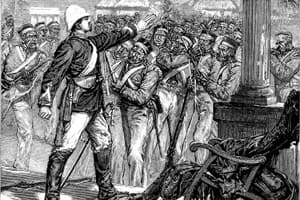 Rebels: The Sepoy Mutiny of 1857 was documented in paintings and drawings, as in this one from 1880. AFP

This makes for an unusual book where Abraham Lincoln stands alongside Ishwar Chandra Vidyasagar, and the African-American reformer Frederick Douglass suddenly gives way to the Muslim thinker Sayyed Ahmed Khan. There are significant parts in the ensemble for Bankim Chandra Chattopadhyay and the Scotsman Allan Octavian Hume (significant thinkers on nationalist questions who were both in the employ of the British government) and for Bahadur Shah Zafar and Peshwa Nanasaheb, the Mughal and Maratha regents toppled by the British who saw hope of resurrection through the rebellion.

The character who holds Gandhi’s world-spanning story together, however, is Irish. William Howard Russell, a correspondent of The Times of London, was perhaps the only person to have been present in India during the time of the Mutiny and in the US at the time of the Civil War. An indefatigable traveller and to some extent a sceptic of Britain’s imperial projects, Russell’s voice was one of the main channels through which British citizens got wind of what was happening in India. Gandhi reprises the story of the Mutiny of 1857 in his own voice and sometimes through Russell’s: how it broke out, what were the passions that animated it, how many died and how many were slaughtered in cold blood. 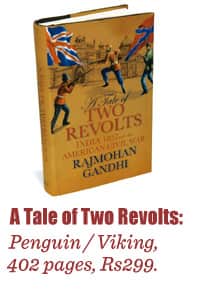 One of the merits of Gandhi’s study is that, when compared with the American Civil War, it becomes all too clear that the Mutiny of 1857 was not India’s “first war of independence", as some nationalist historians have seen it. It broke out not over a grand issue or contested principle, but over suddenly provoked caste and religious sensitivities: the alleged presence of pig fat in the casing of cartridges used by sepoys in the Indian army. Even if it did bring Hindus and Muslims together against the British, this alliance “seemed to require the glue of rage, and it lacked the promise of permanence".

Large sections of contemporary Indian opinion chose to side with the British rather than with the rebels because their interests seemed more closely aligned with the former, and neither the dotard Bahadur Shah Zafar nor the scheming Nanasaheb inspired confidence as alternatives to British rule. Economic and political critiques of British rule were conspicuously absent in the Mutiny’s manifestos. Further, the Mutiny was hostile not just to the white man, but to Indian converts to Christianity. Not only was there no unifying principle in the Mutiny, there was no comparable figure of Lincoln’s moral power and dignity on either the Indian or the British side, to heal the wounds after a truce had been established.

Gandhi’s use of the American Civil War as a point of comparision for Indian affairs has a distinguished precedent. In 1873, the low-caste and anti-Brahminical reformer Jotiba Phule dedicated his book Gulamgiri, or Slavery, to the Americans who fought for the abolition of slavery in the Civil War, thereby implicitly aligning Indian Shudras with American blacks.

Many other such connections between two disparate universes are illuminated by Gandhi, even though it understandably struggles to keep its material within a unified field. Despite its occasional longueurs, there is much to take away from this tale of two revolts.