Chef Shahaf Shatbay, creative chef of Mumbai’s Zenzi and Zenzi Mills restaurants, grew up in Israel, served five years as a diver with the Israeli navy, went to culinary school in Paris, trained in New York, and has set up restaurants in Mumbai, Prague, Serbia and Israel. He talks about the food culture of each of these places. Edited excerpts:

What are your food memories growing up in Israel?

I grew up in Israel in a kibbutz, which is like a community village in which you don’t deal with money. Everyone shares everything, whether the dining room or the car. If you want a car to drive, you have to put your name on a board. We have four cars and if it’s available, you can take it. It was a community of sharing that was very simple. One person cooks for everybody, and there was no special food. So what I remember most is the banana field in the kibbutz.

What made you want to be a chef? 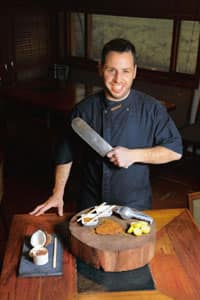 Then I went to New York for my training. After that I moved to Bangkok and learned Thai cuisine for eight months, then I went to the sin city, Amsterdam, and then came to Mumbai. I met my wife here, but she is English and needs fish and chips, so I am in the UK now. I’ve opened three restaurants in Serbia, in Israel we opened two, and now one in Prague. This is how I share my time now. But India is the place where I developed as a chef.

What did you learn at cooking school (École Grégoire- Ferrandi) in Paris?

I learnt tradition and respect for food. You understand where cuisine comes from, what stock is, how to combine ingredients, what you never combine, the way of cutting vegetables and good food hygiene. It brings you close to the history of food. Paris gave me the root, respect, tradition and history. Once you know your roots, you can grow.

What’s the food culture in each of the places you’ve worked in?

Paris, like I said, is about tradition and respect. Food there is just the way they write about it in books. It is traditional and you need to follow it. New York is a big mess but I love it — it’s mess with style. You get every flavour from the world, but everything is about business. Everything is about money; there’s passion, but with money. In Nice, there’s more freedom than Paris because of the Italian influence in the south. It’s French culture with freedom. Amsterdam is not all of Holland, which is different. Amsterdam reminded me a bit of New York, but with an eclectic, cool style. In Amsterdam, I found Asia. What I remember there is the Indonesian food. Mumbai is the market, the smell, the taste of spices. Czech Republic is all old style—goulash and potatoes. Serbia is like a culinary time machine. They’re good-hearted people, but culinarily—nah. I’ll tell you a secret. When I go to a new country to start a restaurant, I go to the newspaper shop and see how many food magazines they have. Then you know the culinary level. In France, there are more than 17, in England they have I think 12. In Serbia, I found one.

When we started Zenzi more than five years ago, the idea was to show the combination of cuisine from Europe and Asia. But now we thought it had become routine—first course, main course and dessert. Even the flavour had become routine. So now we have four sections— the tempura, grill, the flame and a fresh section. You can order one from each, and share them, as the portions and price is less.

We always translate or influence food the way we want. We don’t take something and copy. For example, usually fish is steamed in banana leaves, but here we grill the fish first and then steam it, so it gives extra flavour. We are also presenting it in a more market-like style. For instance, a broken coconut is served with the curry. You don’t eat it, it’s just for presentation. We go to Pali Hill market and take only what is there, instead of importing every ingredient.

The smell — I love it. The smell of spices, it’s very simple. In Pali market, I like the fact that everything you want, they will get. They say “chalo chalo, 1 second", they will give you a chai, and go to bring it. Even if it’s from the other side of the market. I like the fact (that) there is the human touch. It’s not like supermarkets, which have come up, with vegetables from Italy. Those are like a museum. Pali Hill is real life. We buy the poultry from there. For fish we go to Santa Cruz fish market, which is very nice. They always have fresh calamari at 4 in the morning. If you come there at 4am, you will see all this salty water from the sea with the fish, in buckets.

I remember it was a lot cheaper. Five years ago, my friend and I had eaten the same amount of food at Kareem’s in Bandra and spent Rs170. Today we spent Rs1,200. But my chai is still Rs3. India is importing much more. I see many more suppliers and types of fish, meat and vegetables which weren’t there. Earlier, our supplier of dairy products used to send me one page (of a product list). Now he sends me 17 pages. As for eating, then I couldn’t eat any spices. Today I’m a hero. I remember being very impressed with the tandoori. I had never seen it before—marinated in yogurt, cashew, spices and mustard oil. In no part of Asia did I see yogurt in food.