Home >Mint-lounge >Indulge >Of cocktails and the changing bar culture

Of cocktails and the changing bar culture

The face of hospitality around the world is changing. My father works in the industry, and I remember when I was a child he would take me to various places across the UK, Europe and the US to experience how the business worked, from the classic front-of-house management, through to the food and beverage services.

The business has seen a revolution in the last decade, mainly because of one particular website: TripAdvisor. TripAdvisor has ensured that there are no hiding places anymore for hotels. Nice photoshop-ed images on company brochures and corporate websites are no longer the point of references for the potential customer. That place has been taken by the words of strangers.

Now it is about the reviews of a hotel from people who have already stayed there—seasoned travellers, including your humble columnist, who know what it takes to be made to feel welcome, who understand when expectations have been met (or, at times, exceeded) and who are familiar with the ways the place, which they call home many nights a year, works.

Thankfully though, this revolution has run deeper than many in the industry expected. It hasn’t stopped with the ‘‘front of the house’’, those tasked with checking in and out customers and all the guest-related things in between. It has also resulted in hotels having good rooms, facilities like a spa, restaurants run by Michelin-starred chefs and a well-stocked bar.

I remember one incident from my 20s when as a business traveller I was discovering new cities while on work. Those days, often after a late-night flight from London to Los Angeles, if you tried to visit a hotel bar where you were not staying, a surly employee would stop you at the (always irritating) revolving doors, asking that most hateful of questions:

At this moment, quietly in the back of my mind, there would be an angry young man, waving a wad of cash at this inconsiderate employee, shouting, ‘‘I’m not, but I’m here to spend money in your bar. So step aside. I’m coming in for a whisky sour.’’

But I have always been a bit more measured than that and my usual reaction was to sigh, continue pushing the revolving door, and leave. 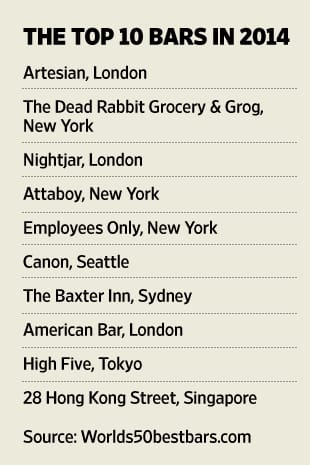 The Will Of The Woods is a mix of Glenlivet, larch, mushroom, citrus and honey, which doesn’t sound like it should work but really does, and the Digidiva, which uses Absolut Elyx vodka, cypress and Acqua di Cedro, is the most photographed cocktail in the world at the moment.

Sadly though, only three hotel bars (the aforementioned Artesian, the American Bar at the Savoy and the Connaught Bar at the hotel of the same name), all located in London, make it to the top 15 list of the world’s best bars. However, they sit comfortably in the top percentile of great bars with dedicated sites in New York, Milan, Sydney, Tokyo and Singapore. Across the wider list of 50, we see venues in Berlin, Prague, Hamburg, Moscow, Amsterdam, Edinburgh, Buenos Aires, Hong Kong and Mexico City, meaning that wherever in the world you are, you’ll never be too far from a world-class bar to enjoy an incredible cocktail of your choice. (Check out the 50 best bars in the world here.)

The gauntlet, however, seems to have been thrown down to India. With the culinary creativity in the country, the flair for flavour, and such vibrant local ingredients, I hope India can also one day have a bar that finds a place in 50 of the world’s best.

But I do know one thing: when I visit India next, at the end of the year for my honeymoon, I know I’m going to have one of the best drinking experiences in the world, sipping a cocktail in the bar of the Oberoi Vanyavilas in Ranthambore, to rival any experience in some of the top cocktail site around the world. Why? Because the most important thing about any cocktail is the environment you’re in when you drink it and the company you keep while doing so.

So here’s a big cheers to those that made the world’s 50 best bars, but also a nod and a wink to wherever you find yourself drinking with a smile on your face and friends around you, for at that moment, it is the best bar in the world.

Joel Harrison a drinks writer and consultant. He also runs the website WorldsBestSpirits.com.