In the 2009 Hollywood comedy Up in the Air, George Clooney plays Ryan Bingham, a suave executive who can proudly pack his entire life into a wallet and an easy-to-carry strolley. His most burning ambition is to amass 10 million frequent flyer miles from American Airlines—just for the heck of it.

David Bruce Warfel, 56, global marketing director for Zippo Manufacturing Co., the US manufacturer of iconic lighters, has a bit of Bingham in him. Last year, Warfel flew over 200,000 air miles, visiting over 20 different countries, all key overseas markets for Zippo, at least twice. Except for a five-day vacation—“a miracle"—during Christmas, Warfel was always on the job in 2010.

Warfel, whom I met at The Imperial Hotel in New Delhi, is single—“I think it’s hard for a family if I’m always away from home," he says, “and I can do without the added pressure of worrying about it."

Warfel’s round-the-world race every year is at odds with the origins of the company he’s been working for for three years. Zippo, which has been in India since 2008, is no global behemoth with steel and glass offices in every major city in the world—it’s based out of Bradford, Pennsylvania, US, a sleepy town with just over 9,000 residents, 20 police officers, and a small university.

Light up: Warfel’s challenge is to dissociate Zippo from the worldwide decline of the tobacco industry and promote the company’s lifestyle products in emerging markets. Jayachandran/Mint

“There’s a family feel in the entire company," Warfel says. “People know each other—if they are not working at Zippo, they have a friend or a relative who is working at Zippo—everyone has a personal stake in the company and a personal interest."

Even though it’s community-centric, Zippo is still a global business, selling in 160 different countries. Everything about the company’s flagship product, the windproof lighter, is iconic—the simple, yet classic design, the weight of the lighter in your palm, the deep metallic finish, the clink of the hinges when the casing is opened, the click of the flint-wheel sparking the fluid, even the size and shape of the flame. Since World War II, during which Zippo stopped commercial production to supply only to the US military, the lighter has been hailed as a masterpiece of utilitarian design, and has become a collector’s item, having sold more than 500 million units around the world since 1936.

“There are few products that become icons," says Warfel, “you can’t create it. The market determines if something becomes a classic or not. When you look at a Zippo lighter, it almost always brings up personal memories. It’s like a song—you hear a song and you remember when you were dating somebody, or your years in school. People have associations and stories that stretch back to their fathers and their grandfathers."

Despite the popularity and instant recall Zippo enjoys around the world, the lighter is in crisis. The critical mass reached against the health hazards of smoking means that the windproof lighter, which accounted for more than 90% of Zippo’s sales at its peak in 1996, when it sold 17.3 million units, now accounts for only 54% of the company’s sales, with 11 million units sold in 2010. Enter Warfel, a marketing man with over 30 years of international experience with global brands, many of them iconic. Warfel has worked with Eastman Kodak, Ray-Ban, Xerox, PepsiCo and Volkswagen, and knows the dangers of diversifying.

“It’s a shame when companies let their core essence slip away," Warfel says, “Xerox had 100% of the copier market, they invented the mouse! But they got distracted and didn’t keep their eye on the ball, and brands do that. They grow big, they diversify, and they lose focus."

Since Zippo’s fortunes are tied heavily to the falling tobacco industry, it is inevitable that it too needs to diversify to stay in business. In markets such as the US or Western Europe, where there is a close association with the Zippo brand and the windproof lighter, making diversification work is a bigger struggle.

“It’s a bit easier to expand your products in emerging markets like Asia and India, where there’s still strong brand equity—people know the brand, but they are not entirely focused on it being a lighter company," says Warfel.

Overseas purchases represented 60% of the company’s $200 million (around ₹ 908 crore) sales in 2010. In China and India, the growth has been especially rapid. Zippo lighter sales have increased by 30% year-on-year for the past 10 years in China; last year, they rose by 69% in India. Zippo didn’t divulge the sales figures for India. 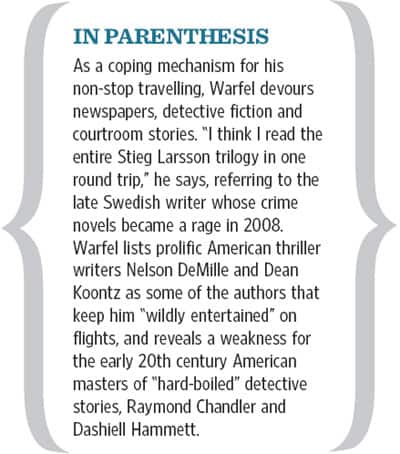 Zippo began a detailed and aggressive sales strategy in India less than three years ago, and the plan is to sell the products through Zippo boutique stores, travel-retail stores, and kiosks in shopping malls and airports.

Warfel likes to spice up his business trips with cavalier gourmet explorations.

“I’ll try anything at least once," he says. “I like jellyfish, duck’s heart—which is very good. Eel, donkey, duck’s foot."

“What’s the weirdest thing you’ve had?" he asks me.

“I wouldn’t eat cockroaches," he says, taking a meditative sip on his latte. “I couldn’t do that."

At home though, he falls back on simple grills and ‘huge salads’ that he makes himself.

He likes travelling and his single ways, but admits there is a downside.

“Of course, when I get back home and open the door, I don’t have a dog or kids running to say hello," he says. “I come home with the dirty laundry to an empty refrigerator, and a stack of bills."