Anatomy of an ‘Indian’: answers to the FAQs

Analysis: Patriotism is “love of one’s country and willingness to sacrifice for it". The second aspect is objective and can be documented. If we observe Indians, do they demonstrate willingness to sacrifice for their country? The answer is no. In his country the Indian is an opportunist—in traffic, in queues, in avoiding process, in littering, in avoiding taxes. Where he can find advantage, he will take it (see note 1). He doesn’t see this as wrong. This is why he must be constantly policed—because he hasn’t internalized common good.

A: Indians are not patriots.

Analysis: Nationalism is the “feeling of superiority of our nation over others". In India, the word has not yet acquired the menace it has in English. Nationalism (“rashtravad") is a good word, a warm word in all Indian languages. 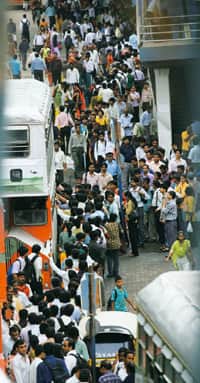 A: Indians are nationalists.

Analysis: Opportunism is “taking advantage of opportunities without regard for the consequences for others". This describes accurately the difference between our cities and those in Europe.

A: Indians are opportunists.

Analysis: Piety is “the quality of being religious". Religiousness is the belief in and worship of a superhuman controlling power.

A: Indians are religious and pious.

A: The answer is that Indians are taught not morals, but dharma.

Analysis: Racism is the belief in superiority and inferiority based on skin colour. Indians view those fairer than them differently. We discriminate positively against whites and negatively against blacks. Indians aspire to be white. No Indian cosmetic promotes dark skin.

A: Indians are racist (see note 3)

Analysis: The universal meaning of secularism is accepting politics that is independent of religion. Our Prime Minister is not Hindu. Our most powerful leader is not even Indian. 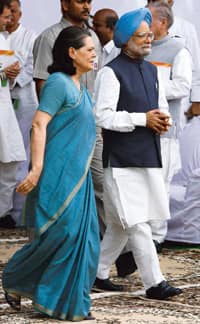 Manmohan Singh and Sonia Gandhi are the faces of a secular India. Pankaj Nangia/Bloomberg

A: Indians are secular.

Analysis: Hypocrisy is “claiming moral standards to which our own behaviour does not conform". Let’s examine corruption in India. One: The everyday behaviour of Indians is incompatible with our views on corruption. Two: Demonstrably corrupt people are admired and returned to power by us. (see note 4).

A: Indians are hypocrites.

Analysis: The universal definition of communalism is “reliance on cultural and social groupings". The most important clue—matrimonial advertisements—indicates our discomfort at leaving our social group.

A: Indians are communal.

Analysis: Conservatives are “averse to change, holding on to traditional values, especially in politics". Our politics is not based on values, but on group opportunism. Dogma does not win elections in India.

A: Indians are not conservative.

Analysis: Liberalism is “being open to new behaviour and being willing to discard traditional values". The collapse of vernacular schooling, the success of Indians in the modern economy shows our ability to easily set aside traditional values in our self-interest.

A: Indians are liberal.

Analysis: Tolerance is the “willingness to tolerate beliefs and opinions at variance with ours". The Indian belief is polytheism (“many gods") and pantheism (“god is everywhere"). This is mistaken for religious tolerance (see note 5). Tolerance must exist outside of this belief. Does it? The answer is no. Those who hold views opposed to ours must shut up or face violence. The evidence is in newspapers every day.

A: Indians are not tolerant.

1. Where his countrymen are damaged by his individual action—through illegal immigration—the Indian will choose himself over India. Embassies observe and record national behaviour.

Violations by Indians over decades, not racism, have made visa access restrictive, quite rightly, to all Indians.

In Australia the Indian youth behaves as he does in India, and then complains of racism when society objects and punishes him.

Our patriotic feeling is weak, though our nationalist sentiment is strong.

2. Is Shri Ram’s murder of Vali and his treatment of Sita moral? Is Shri Krishna’s advice to Arjun on Karna moral? Is his action on Jayadrath moral? Is Acharya Drona’s behaviour with Eklavya moral?

Our texts say: “Yes." They are right according to dharma (if the question is asked in an Indian language). But they are wrong morally.

Dharma is opportunistic, while morals are not.

3. We mustn’t blame faith for this. Our texts repeatedly insist that our favourite gods—Shri Ram, Shri Krishna and Shiv Mahadev—are all black-skinned.

4. Indians think of corruption as something on the outside, which must be “solved" by the government. We are greatly agitated over this. The paradox is that a most honest, unelected man has been imposed by a foreigner over Indians on sufferance. Corruption is actually “inside" us but not apparent to a nation of hypocrites.

5. On the question of religious pluralism in Hinduism, Narendra Modi says Indians show acceptance and not tolerance. He is quite right. Tolerance is confused with pluralism (just as corruption is confused here with bribery).