Smita Verma: on a success trail

Smita Verma: on a success trail

Just two weeks ago, 22-year-old Smita Verma helped her family move from their one-room tenement in Old Delhi’s Chandni Chowk—the house that she was born and brought up in—to a two-floor stand-alone house in Shastri Park, a couple of Metro stops away. In the new home, houses don’t meld into one giant housing block and windows open out to real roads instead of other tenements.

Her job as a piping design engineer at an American construction company that consistently features in the Fortune 500 list pays well over Rs20,000 a month. She is the first engineer in her extended family, and thanks to her, the Verma family is the first in the extended lot to have moved out of the crowded bylanes of one of Delhi’s most congested neighbourhoods. 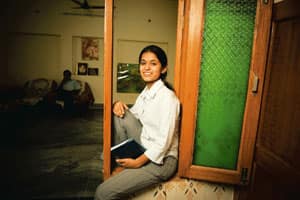 Full circle: Smita Verma, an engineer, is now a donor to the Udayan Shalini fellowship programme, which funded her education. Harikrishna Katragadda

Till class X, Verma, like most other girls in her neighbourhood, went to a Hindi-medium girls’ school that didn’t offer science in classes XI and XII. The reasoning was practical: Few girls who attended that school had aspirations to go to medical or engineering college. Verma pleaded with her parents to be moved to an English-medium school so that she could better prepare for engineering college. She spent the three-month break after her class X board exams acquainting herself with the scientific terminology in English.

Despite discouragement from those around her, she determinedly went ahead and educated herself in English. “They said I wouldn’t be able to do it; that it is difficult to break out of what one is conditioned for," she says. “It sure was, but in the end it was worth it." Every day, she’d read the same chapter in her old Hindi textbook and then reread it in her newly acquired English version. “Once I learnt that ‘acceleration’ simply meant what I knew to be twaran, studying science in English didn’t seem so intimidating," she says.

On a relative scale, Verma didn’t grow up in abject poverty. Her father, Rajender Kumar, owns a school uniform shop in Chandni Chowk. He sent all his three children to school: Smita, her younger sister Priyanka (21) and brother Vaibhav (16). But an engineering degree, that costs around Rs35,000 annually, would have been difficult to fund. The Rs18,000 Udayan Shalini fellowship sponsored half of Verma’s tuition annually and that made things much easier.

The Udayan Shalini fellowship is awarded on the basis of need, talent and aspiration, and is designed for girls like Verma who have had their basic school education, but are limited by resources in breaking the socio-economic barrier that keeps them from realizing their full potential.

The financial criterion dictates that the combined family income of the applicant has to be under Rs8,000 per month. Verma is from the first batch of 72 Udayan Shalini fellows who were inducted in 2002, with each girl selected after two rounds of testing.

Both Kiran Modi, founder and managing trustee of Udayan Care, and Vikram Dutt, former vice-chairperson of the Forum of Public Schools, who directs the fellowship programme, count Verma among their brightest mentees. “She went beyond what was expected of her. She stayed up nights to brush (up) her language skills and today she is a bright, confident young woman," says Dutt. “I keep telling her chuhiya banke aayi thi, sherni banke ja rahi hai (she was so timid when she came and she has so much confidence now)."

What makes Verma a success story is that she’s come full circle. Today, she is a donor to the Udayan Shalini fellowship programme, something that Modi says she hopes every fellow will become. She also exudes an aura that compels those around her to take her seriously. On her advice, her parents shifted both her younger siblings to English-medium schools in order to improve their higher education prospects.

Verma’s life today is far removed from what her family had imagined. Other girls from her milieu would have either been married by now or would be thinking about it. Verma shrugs off all marriage-related talk: “Well, there are proposals but I haven’t settled into my career yet," she says. A master’s degree is on the cards.

Does she wonder how things would have panned out if the fellowship hadn’t happened? She says, almost dismissively, that she never thinks of the “ifs". “What’s the point?" she asks.

When she was in class III, Verma recalls a knitting assignment. All her classmates had their mothers or grandmothers finish their assignment for them. “Those were perfect," she says. But her mother, Manju, refused to finish hers for her. “She did half of it and asked me to follow it up."

Verma marks this as her most valuable life lesson: “Standing on my own feet and following up on my own success."

For the last 15 years, Udayan Care has been caring for disadvantaged children and women. Along with outreach programmes and 10 foster-care homes in and around Delhi, the organization conducts the Udayan Shalini fellowship programme, which provides monetary aid and mentoring to girls from disadvantaged socio-economic backgrounds who want to pursue higher studies. Kiran Modi, founder and managing trustee, says that since its inception in 2002, the programme has helped around 1,500 girls, in the 16-24 age group, in five cities.

Partly fund the Udayan Shalini programme. The money is used to support a high school, college or professional degree student. Annual donations are typically accepted in denominations of Rs10,000 (high school), Rs15,000 (college) and Rs25,000 (professional degree). Donors are expected to ‘adopt’ a girl and commit to a six-year period. They are sent reports on the girls they have sponsored.

If you want to volunteer

Udayan Care seeks long-term mentors who will be available to counsel Udayan Shalini fellows round the year. The programme currently works with 85 such mentors across the country