Thanks for Visiting Mint
You seem to have an Ad Blocker on. Please turn it off in order to continue, or whitelist Mint
HOW TO TURN OFF AD BLOCKER
OR
REFRESH IF YOU ALREADY TURNED OFF THE AD BLOCKER
Home >Mint-lounge >Your mama don&#8217;t rock &#8217;n&#8217; roll

The other day I had a sobering déjà vu moment. I realized that I had just become my father. No, I didn’t have a sex-change operation. Nothing as exciting as that. I just found myself telling my kids, “I don’t know why you kids listen to trash like that." It was when my 12-year-old gave me the eye-roll that I realized that I sounded just like my father. 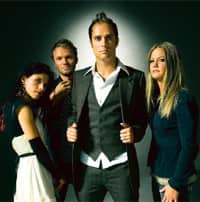 Sizzling: Rock band Skillet is all the rage among 12-year-olds.

I don’t know if this happens in your household but in my home there is a clear schism between the generations. When I hear the music my children listen to, I invariably go, “What is that?" My kids say the same thing when they hear my ragas and Oriental mood music. Unless of course, they are wangling for some candy, clothes or toys, in which case their response is more polite.

Bollywood music is the exception. We all listen to Ya Ali, Jhoom and Dhoom. Tamil and Kannada songs, to a certain extent, are a commonality too. But for the most part, they listen to music that sounds like a stuck tabla-record with names such as Breaking Benjamins, Jay-Z, and Jonas Brothers. What really irritates me is that the spelling and pronunciation is all wrong. Soulja Boy? What is that?

Why don’t you listen to Bhimsen Joshi, I told my six-year-old recently. He won the Bharat Ratna this year. Since we had just ended a discussion about Halloween candy that had gone in her favour, she replied cautiously, “Who is Bhimsen Joshi and what is Bharat Ratna?"

“I can’t believe how little you know about our culture and traditions," I began before realizing that again, I sounded just like my father. Worse, my grandfather. So I shut up.

Recently however, I listened to something my kid was listening to and actually liked it. It is a band called Skillet and the song I heard was Whispers in the Dark. But here is the difference in our ways of listening to Skillet. I wanted to make this commonality into a teachable moment that went beyond, “Oh, here is Ma trying to act cool by listening to our music."

You can’t blame me for trying though. So one evening, when my 12-year-old daughter had all her friends over, they cranked up the music and congregated on our terrace. I went over, all casual-like and began to bob my head. In rhythm. I was even wearing my vintage college T-shirt so I would blend in with the kids. Everything was going swimmingly till my daughter came over and said, “Ma, please. You are embarrassing me."

“You know," I said bitterly. “You sound just like me when I was your age."

I didn’t give up though. When the kids came in for pizza, I said brightly, “Did you know that Skillet has two women and two men in the band?"

The kids looked up and then looked at Ranjini (my daughter). Ranjini shook her head at me desperately. Stop, please stop, her eyes begged.

“The drummer’s name is Jen Ledger," I continued resolutely. “The keyboard player is Korey Cooper. You girls should aspire to be drummers. Better yet, why don’t you be composers like A.R. Rahman? Indian music is nothing to sniff at actually. Our ragas include pentatonic scales, heptatonic scales and then some…"

Halfway through this diatribe, I knew that my teachable moment had gone horribly awry. The pained look on my daughter’s face told me that. But for the life of me, I couldn’t think of a graceful way to end it without coming across as a real loser. So I blathered on. Thankfully, I had the sense to know that I was losing them with the ragas and pentatonic scale.

“Skillet is a Christian rock band. Did you know that?" I said. “They began in Tennessee. I looked it up on Wikipedia."

By this time, about a dozen kids were standing around the table, chewing on pizza and staring at me pie-eyed. My eyes were begging them to interject, to change the subject, to contribute, to do something to stop my verbal diarrhoea, but nothing happened. I think they were all too shell-shocked by my monologue to interrupt.

Then my daughter did something. She did me proud. With superb sense of beat and timing, she interrupted my speech by saying, “Speaking of Skillet, Ma, shall we listen to the song that is your favourite?"

And she cranked up the volume. Whispers in the Dark didn’t sound like a whisper at all but I was beyond caring. To my daughter’s eternal gratitude, I didn’t boogie along with her friends. I didn’t even try to pretend-play the guitar. I just sat on the rattan chair on our terrace, sipping a glass of Tarapaca wine and smiling beatifically at the sight of a dozen young kids dancing gracefully to the frenzied sound of Skillet. Panheads, they are called, for those of you uncool parents who didn’t know this. I looked it up in Wikipedia and yes, I know I sound really lame.

After the song ended, the kids did something that renewed my faith in parenting. They came over and said, “Aunty, we would love to listen to your Bhimsen Joshi."

I beamed my head off. As I got up to get his CD, Ranjini said softly. “I bet Bhimsen Joshi would sound really good with some of the gooey chocolate cake that you refused to let us have."

Shoba Narayan wants to know what kids listen to these days so that she can drop names when her children’s friends come over. Write to her at thegoodlife@livemint.com