The Indus OS 2.0 caters to users who feel more at home with their mother tongue, and Micromax has started deploying it in their phones

Most smartphones, if we club them together in certain price brackets, more or less use the same set of hardware. What differentiates one manufacturer from another after a point is the software and the features. A few Indian phone makers have tried their hand at it by developing their own software for phones. This is where Micromax has taken a lead over others. The Indian phone maker has deployed the home-grown UI, called Indus, developed by Mumbai-based start-up FirstTouch. Indus is basically a custom UI wrapped around the Android software, which caters to Indian users who are more comfortable using their mother tongue. The unique feature is that it offers pre-loaded tools and apps which work seamlessly in 12 vernacular languages.

We take a look at some of the key highlights of the Indus 2.0 interface. Supports 12 regional languages: The user interface supports 12 Indian languages, including Hindi, Tamil, Bengali, Marathi, Gujarati, Oriya, Punjabi and Telugu. This means that a user can carry out practically every task from calling, to messaging and web browsing in the language of their choice. This option is accessible from the Indus settings which is separate from the usual phone settings. 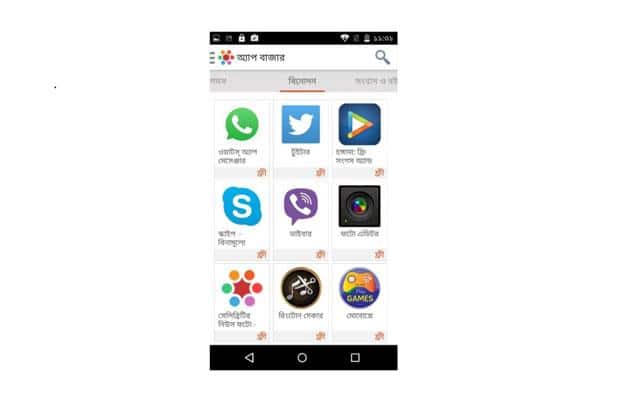 Regional language app bazaar: One of the highlights of Indus OS 2.0 is its app store which has more then 25,000 apps and games on it. This is over and above the default Google Play Store for downloading apps. To help improve user searches on the app store, Indus has classified the apps under multiple interest-based categories, which show at the top of the page. The layout is clean, but the number of preloaded apps is still pretty limited. What gives it an edge over the Play Store is that when you change the language in the Indus settings, it changes the complete listings language in the app store as well. Translate with a swipe : Indus OS 2.0 allows users to translate text typed in the phone’s default messaging app from English to any of the regional languages and vice-versa by swiping towards right on the text box. Users don’t have to select the text to do it, but can swipe anywhere on the box and the entire text in the box will be translated. Similarly, swiping from left to right will transliterate the same text into English.

But the limitation is that the translate feature only works with English as the base language, at the moment. You can translate from English to any of the 12 Indian languages, and vice-versa. But you cannot, for example, translate text in Bengali to Malayalam. Also, for this feature to work, the phone should have an active WiFi or data connection. Smart typing: Predictive text input and auto correction works with all language keyboards. Indus OS 2.0 offers not just predictions for word but also shows predictions for matras (vowel signs used in some Indian languages such as Hindi) and auto-corrects them as well. The keyboard has a database of over 2 lakh words from regional languages, which is impressive. Text to speech: This feature works when a user wants Google to read the text in apps that support text to speech. As of now, this feature works only in Hindi and Bengali, among Indian languages, in most smartphones. In Indus 2.0, users can have the text read out aloud to them in apps in up to six Indian languages (Hindi, Telegu, Marathi, Bengali, Malayalam and Tamil) in apps which support these languages.

This is definitely a unique take on the Android custom interfaces, which had become somewhat similar over time, across phones. The ability to use Android in as many as 12 Indian languages adds a convenience element for a lot of users, which other phones haven’t been able to offer so far.