Following the journey of India's most revered river, from the mountains to the sea

In 2013, a young photographer from Pune, Maharashtra, decided to follow the Ganga from Rudraprayag in Uttarakhand to Gangasagar in West Bengal. One of his most abiding memories of the great river is its “disgusting smell, almost like sewage".

“In Kanpur, the river looked like a nallah (drain)," says Akshay Mahajan, the 30-year-old photographer. “It just did not feel like the river, though that sense changed in Allahabad, where the Yamuna meets the Ganga. However, it was in Patna (Bihar) that the river looked really wide."

It is difficult to be optimistic about the future of this great river, which originates in the snowy reaches of the Himalayas and ends thousands of miles away in the Bay of Bengal. Earlier this week, as part of the Union government’s ambitious Namami Gange programme, the Union human resource development ministry was asked to set up an institute of river sciences to create expertise in cleaning and reviving the Ganga and other rivers. Other ministries have also been asked to pitch in. The drinking water and sanitation ministry has to build toilets in villages along the river. The tourism ministry is supposed to promote green tourism. The shipping ministry is tasked with developing sustainable river transport infrastructure.

Meanwhile, photographers like Mahajan can try to jolt us out of our inertia by chronicling the state of the Ganga.

It took Mahajan around a month to follow the river from the mountains in Uttarakhand to the West Bengal coast. He was accompanied by American photographer Mustafa Abdulaziz. The trip began from Rudraprayag in the Garhwal Himalayas. Here, the Alaknanda merges with the Mandakini. Further down, at Devprayag, it meets the Bhagirathi that comes down from Gomukh, the mythological source of the Ganga.

It is from Devprayag that the river is known as the Ganga.

In the mountains, Mahajan travelled along the river—it helped that a motorway runs parallel to it. He shuttled from one local bus to another. As the river entered the plains, Mahajan alternated between buses and trains, even a boat. It took him two days to get from Allahabad to Varanasi, a distance which can be covered in 2 hours by car. But Mahajan was on a country boat. “The boatman made khichdi for me on the boat," he says.

In the flatlands of Bihar, the photographer used local buses to make short trips to the tributaries of the Ganga that were coming down from the mountains in Nepal.

Mahajan’s journey ended at the pilgrim town of Gangasagar. “Pilgrims and tourists crowded the ferry to Gangasagar, where the river meets the Bay of Bengal," he says. “There," he adds, “the Ganga widened to the size of an inland sea, and her water had turned saline." 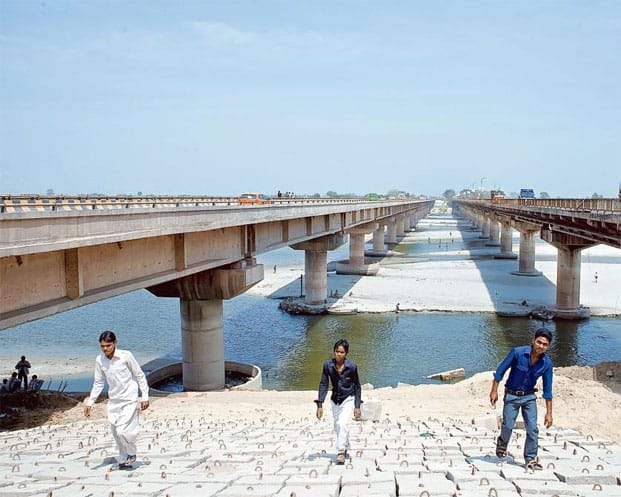 Pilgrims and tourists throng the ferry to Gangasagar, where the river meets the Bay of Bengal. A dog crossing a drain that empties into the Ganga at Varanasi. A bridge on the Gandak river in Sonepur, Bihar.