The Dawoodi Bohras (or Vohras) are a Gujarati trading community which fanned out across India (and to East Africa) in the 19th and early 20th centuries. They are most visible in cities like Mumbai, as traders in hardware, glass and textiles. e94c6518-bc42-11dd-93d9-000b5dabf613.flv

Like several Indian trading communities who moved to other lands, they invested significantly in residential architecture in their native towns, building neighbourhoods that have come to be known as “Bohrawads"—a legacy now largely threatened by neglect. 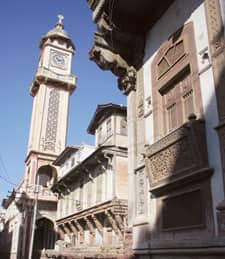 The minaret of the mosque where the two Bohrawads in Kapadvanj meet. Himanshu Burte.

The Bohrawad in Kapadvanj near Ahmedabad shows how this architecture sustains community life. Essentially, a Bohrawad is a neighbourhood built around a street and its branches. For defensive reasons, the street developed a gated entrance, not unlike the pol of Ahmedabad. In Kapadvanj, the nani (new) and moti (old) Bohrawads are entered through twin gates. In each Bohrawad, rows of narrow, deep houses—three to four storeys—are packed along the main street, interrupted by cross-lanes at regular intervals.

Interestingly, two other Bohrawads in Sidhpur in north Gujarat are organized in a regular grid—an obvious influence of the British, with whom they had good relations.

Zoyab Kadi, an architect originally from Sidhpur, suggests in his book Sidhpur and its Dawoodi Bohra Houses that there is an influence of vaastu shastra discernible in their architectural plans. Yet, walking the 19th and early 20th century Dawoodi Bohra neighbourhoods, or Bohrawads, of Sidhpur and Kapadvanj, you are struck by a delicious sense of unreality. You cannot quite get a fix on their architectural identity. There is a strong European character to it, particularly dominant in parts of Sidhpur built early in the 20th century by the Shia Muslim trading community. But the spirit is not really European. It is somewhere between the formality and bombast of European neoclassicism and the intimacy of the traditional Indian residential architecture of densely built towns. In addition, the spirit of this architecture is uniquely inflected by Islamic traditions of building in India. Windows off the raised ground floor, with or without window seats, are decorated richly—they are the main architectural elements on the façade. The decoration frames a person at the window. This architecture, then, makes people look good.

From the community perspective, the Bohrawads enable people to stay in close touch with each other without compromising privacy. That balance comes from two different strategies: the window seat by the street and the internal “courtyard" in each house.

The main living floor is 4-5ft above street level, built over a basement. Small but comfortable windows or window seats open into the street. This slight height allows the seated person to keep a distance from the street while almost being part of the action. Yet he or she can easily lean out to talk to a passer-by, child, neighbour or vendor.

The internal “courtyard" in the typical Bohrawad house shows how far a traditional concept can be stretched. We normally understand a courtyard to be an open space at the centre of the house. We often imagine them as open rooms. However, the Bohrawad “courtyard" is generally no more than a series of cutouts in every floor, lined up one above the other. The opening is small, about 4 sq. ft , and covered with a metal grille or mesh for safety. In extreme summers and winters, these modest openings provide natural light and ventilation without letting too much of the weather in.

This vertical shaft also lets families on different floors of the house stay in touch. The upper floors were often occupied by married sons. Each family achieved a level of privacy, as in an apartment, while connection across families was maintained by the architecture.

Thangaratmaheswaren Jayabalasubramanian, an Indian-origin chef based in Cardiff, has won three industry prizes at an international chef competition for sculptures made entirely of bread. An executive chef at Cardiff’s Park Inn Hotel, Chennai-born Jayabalasubramanian, known for such sculptures, created an intricate garden scene more than a foot in length and coloured with coffee. He bagged three industry prizes at the Hotelympia Salon Culinaire International, UK’s largest competition for chefs. He also enjoys turning melons into flower decorations, making marble lookalike statues from butter, drawing pictures in sugar and cocoa, and carving giant ice sculptures. He won his first award while working for a hotel chain in New Delhi. PTI

The Clinton Presidential Library gives visitors a look at what they’d see if they could get inside the working area of the White House. The view now comes with extra horsepower. The centre’s new ‘Art of the Chopper’ exhibit (on till 8 February) displays 30 gleaming, handcrafted motorcycles from around the country that reflect American culture in the late 20th century, which Clinton centre director Terri Garner says is part of the museum’s mission. Black and white portraits of the choppers’ creators by photographer Tom Zimberoff, who assembled the show, are displayed with the bikes. AP

It’s billed as the world’s most expensive, most beautiful book. Costing well over $100,000, a donated copy of a 62-pound handmade tome depicting the life and work of Michelangelo has arrived at the New York Public Library, fresh from publication in Italy. The velvet and marble-bound book will go on public display for a week from 2 December. Titled ‘Michelangelo: La Dotta Mano’, it is filled with photographs of his drawings and sculptures, creations from the Sistine Chapel ceiling and his poetry. AP