‘For film-makers politics is risky’

Prakash Jha straddles his roles as a politician and film-maker with seeming ease. The two realms, he says, don’t overlap or influence each other. The best of Jha’s films (Damul, 1984; Mrityudand, 1997; Gangaajal, 2003; Apaharan, 2005) have explored the tense dynamics between caste (and class) and politics. Over the years, his evolving style—realistic without the gloss and noise of commercial cinema in the first decade and more mainstream since the 1990s—has not affected his choice of subject. 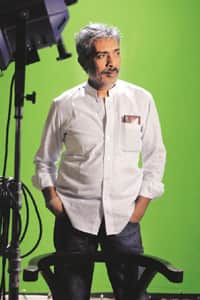 ‘Raajneeti’ is being promoted as a film about politics and beyond. What’s in it beyond politics?

It deals with politics in everyday life. Politics between a husband and a wife, between friends, and between professional rivals. By nature we seek power and in trying to gain power we manipulate and manoeuvre people, which is playing politics. Raajneeti looks at politics in totality, not elections alone, although there’s an election in the background. It is about ordinary citizens and about individuals who are part of the political process directly, and about a family of politicians.

It is your most commercial film so far, with a big star cast. What was different about the process of making it?

I don’t know if it is the most commercial of all, even a small film can become commercial. All the films that I do now are in the middle of the commercial market. I must be commercially viable, that’s always on my mind. But it is certainly the biggest in terms of scale. Very large shots were set up, with around 8,000 people at a time. We shot for around 100 days in Bhopal. It was a challenging and rewarding experience.

Who was the most difficult to direct? Were Ranbir Kapoor and Katrina Kaif natural choices?

All of them are established actors, my job was to convince them about their characters and get the shot I wanted. They have brought in their own to the roles, of course. Ranbir was a natural choice, I signed him on soon after Saawariya, when I was writing the script with Anjum Rajabali.

It has been reported that ‘Raajneeti’ draws heavily from the Mahabharat.

When you are writing, it becomes easy to relate to characters emotionally when you have a familiar emotional frame of reference. We know the Mahabharat characters, so that’s the way we designed the characters. But anyway, any character that you design in India will have some characteristics similar to someone from the Mahabharat—it’s so huge that every kind of character exists there. Instead of any oblique references, we have direct references.

You are in politics yourself, having contested for the Lok Sabha from Champaran in Bihar. How does a politician make a film about politics?

My being in politics to contest elections is slightly different. I have never been part of a political party. My reason for contesting parliamentary elections is primarily because in the past five or six years I have been able to do some work in my district in Bihar. Through my NGO, Anubhooti, we have done some work in healthcare, education, with farmers. I have always been socially active in Bihar and very close to where I come from. To contest elections was to have access to resources. When you have people backing you it becomes easier to access any government department.

For people, politics is a bad word. They are cynical about governance after years of corruption and criminals in politics. Does ‘Raajneeti’ reiterate that ugly truth?

Raajneeti is a story of people who are neck deep in politics, and for them politics is not a dirty word. As a film-maker I have engaged with the characters I have, as much as I can, and they are in this really cut-throat, ugly world. I agree that politics in general has become a derogatory word. Just like we say to friends “Mere saath filmi mat ban (don’t act filmi with me)", we say “Mere saath politics mat khel (don’t play politics with me)". But I do think there are young people who are conscious, getting interested, even seeing politics as a profession. In a democracy, political ideology, political thought and political action should become a part of our life. A simple thing like the importance of voting must become a training in schools. Raajneeti is not an essay on democracy. And I am no judge of social norms. If a message gets drawn, it’s fine.

Why don’t we have more films about power politics or political biopics?

Forget power politics, there are no “political" films. It’s seen as difficult terrain. Film-makers find politics risky—from the business point of view. There is also no understanding of how politics works and a political party works. They are not seen as relevant in our cities. We just want to entertain people. But these days, many young film-makers are experimenting with different subjects and I am sure politics will be more acceptable as a subject for smaller, experimental films. I am very hopeful of the new India and new Indian cinema.

You have been making films since 1983. How much have you had to change your ideas and style to adapt to the times?

Change is a compulsion of the economy. When you open up your market, the first thing you have to give up is protection. The very first casualty in liberalized India was cinema, culture, the arts, because nobody thinks it is important to nurse art.

In the early 1990s, the impression was that if five big stars make a lot of money, everybody in the film world makes money. The NFDC (National Film Development Corporation) became defunct in the 1990s, but one had to survive. In 1984, I made Damul with a budget of Rs12 lakh. When I wanted to make Mrityudand in the 1990s, I had to have at least Rs70-80 lakh. Either you pack your bags or adapt to the market. And the moment you start adapting, you have to know the language of the market. Mrityudand was the big transition for me—there were songs, very “commercial" dialogues and scenes that were set up.

Your world view has also changed over the years, and your films have often mirrored the changes in the caste-politics dynamics in small-town India.

Yes, absolutely. The feudal society in Damul was based on traditional caste relations. In Mrityudand, the traditional zamindar of Damul whose diktat runs over the people and their lives, is suddenly reduced to a man living in a big, crumbling zamindari house but his lands have been sold to a low-caste man. The landlords and powers-that-be in Mrityudand are the contractors, represented by the character played by Mohan Joshi. Eight years later, in Gangaajal, one Yadav kills another Yadav. That’s the decade of saturation of caste-based politics. What’s happening to Mulayam Singh and Lalu (Prasad) now? It’s a saturation point of their caste-based politics. I have studied the overlapping of caste and politics, and the time when the Mandal Commission and the market economy happened, simultaneously, was an amazing time for me to make movies. In Apaharan I have shown the worst phase of democracy, when democracy only means elections and even kidnapping is protected in the name of politics.

So is ‘Raajneeti’ about today’s coalition politics?

It is, without representing any real political figure or real place. It is set somewhere in the Hindi belt of India, the milieu I am most familiar with.