The bright red wall behind Rajiv Kaul’s desk is not just an arresting design feature. It is also the perfect visual metaphor for his work style and personality. 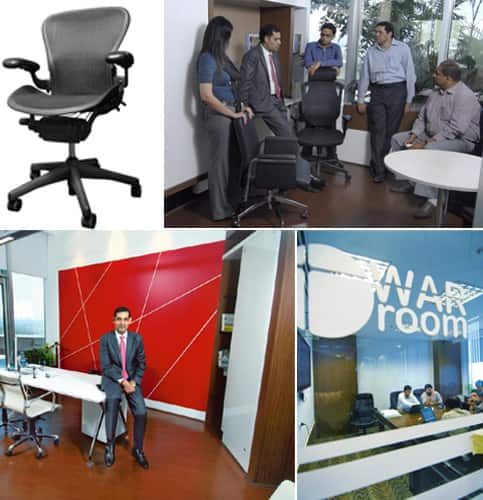 Transparency all the way: (clockwise from left) Rajiv Kaul uses an ergonomic Aeron task chair, made by Herman Miller; he believes ‘cultural transformation’ of the business can only take place in an open office where employees can easily access each other; the ‘war room’ is actually a meeting room; and the bright red wall behind Kaul’s desk works as a perfect visual metaphor for his work style and personality

Kaul embodies what might be termed as the “takeover and makeover" philosophy of business leadership. Over the last two years, he has hired a highly professional, senior management team, implemented a new growth strategy, declared his vision for the corporate brand (“I don’t want to be a nice company; I want to be a respected company") and, most interestingly to me, invested in a new workplace. I am curious to meet Kaul as he exemplifies the growing trend of chief executives who creatively leverage their workplaces as vital assets for business success.

Kaul’s wall is a bold stroke, just like some of his business decisions at CMS (such as jettisoning non-lucrative customers). The backdrop grabs viewer attention in the otherwise understated cabin of wooden floors and white furniture. “I wanted one shocking thing (in the office)," explains Kaul, saying that he chose red for its “vibrancy, passion, intensity".

The vivid shade also echoes his candid nature. Kaul pulls no punches when he outlines CMS Info Systems’ strengths and weaknesses, characterizing it as an “entrepreneurial, innovative" business which was “mid-sized, under-invested and under-managed". He is equally forthright while recounting the decision to invest in a new workplace.

CMS Info Systems relocated to a high-ceilinged, high-rise, bordering Mumbai’s Western Express Highway. The move, in August, took place after nearly a year of hunting for the ideal location, negotiating affordable rents and designing the interiors.

Kaul was similarly detail-oriented in planning his own workspace, exhibiting a universal CEO quirk. I’ve noticed that for most chief executives, especially men, their cabin is the only domain that can be entirely fashioned in their own image (homes are usually ceded to partners). Enormous amount of time is thus spent in designing their immediate environment, with scrupulous attention paid to colours, materials and finish.

Kaul echoes this sentiment, professing the office is “like my house, this is like my life, my family members". He confesses that he “wasted time" looking for a “long, thin desk" but couldn’t find a suitable option within his budget. Architecture firm Ideamatrix finally custom-designed a white worktop made from montelli, a high-end surface material. A closer look at the table reveals a fine red line running along its edges, specified by Kaul to match the room’s backdrop.

The asymmetrically shaped, compact cabin is both modern and global. The furniture pieces are decorative items in themselves, inspired by Western design classics, compensating for the lack of notable artworks. The desk’s spindly table-legs owe their origin to Swiss furniture maker Vitra; the lounge seating to German master Mies van der Rohe’s iconic Barcelona chairs. Clones of both brands populate offices the world over.

Kaul’s ergonomic Aeron task chair, made by American manufacturer Herman Miller, is also unusual for Indian chief executives. Although expensive by Indian standards, in the US the chair is more popular among middle and junior managers and is usually not considered “presidential" enough for CEOs.

Western furniture brands and clean lines underline Kaul’s overseas experience, including his decade-long tenure with Microsoft in Seattle, US, and India from 1996- 2006, and his more recent spell from 2006-07 in London with the UK-based private equity fund Actis.

Ironically, Kaul says he doesn’t spend much time in his cabin, preferring to meet with employees or customers in their own domains. “I need to see people, see them, feel them, talk to them, walk to them," he affirms. “I get my energy from people".

Kaul was adamant that his much-desired “cultural transformation" of the business could only take place in an open office where employees could easily access each other. “I was very clear on no doors. I don’t want knocking on doors, I don’t want you sending emails to the very next room," he states. As a result, the office’s senior management enclave consists of semi-enclosed private spaces without doors. The architects devised a clever structure with built-in desks and storage that both separates and unites the individual areas, allowing frequent and spontaneous encounters between colleagues.

The new headquarters sparkles with ivory workstations (Kaul insisted on the bare colour), natural light and battle-inspired signage (meetings are conducted in the “war room" and the “bunker"). Kaul believes that the space is contributing to growth by enhancing employee collaboration, facilitating new recruitment and promoting customer intimacy. Such an office also symbolizes the new management team’s long-term commitment to the business, I suggest. He agrees. “It definitely matters. It shows intent and which way we are thinking." Possibly, a business mantra for others to adopt