Home / Mint-lounge / Hindustani music and partition
Back
Share Via

Hindustani classical music may not be what people first expect from the land of Sufism and qawwali, Pakistan, but that is exactly the highlight at the two-day Hindustani Music and Partition festival at the India Habitat Centre in New Delhi. Organized by Ektara India, the festival follows a recent workshop at the Jamia Milia Islamia University in the Capital where Hindustani classical musicians and vocalists from Pakistan were in town to interact with their Indian counterparts.

“The most important vision behind this (the workshop and the music festival) would be to bring the positive cultural things into the limelight in both the countries, instead of all the antipathy that seems to be getting prominence," says Yousuf Saeed, the festival’s coordinator. The idea to bring these artistes to India germinated from Saeed’s 2005 documentary film, Khayal Darpan, which explored the classical music traditions of urban Pakistan, mainly focusing on the musical lineage of Ustad Amir Khusro.

Now, things are changing for the better though. Many new institutions teaching Hindustani classical music are opening up in Pakistan, such as the musicology department at the Sajjan Nagar University. According to the artistes who will be performing in Delhi, classical music never got the kind of encouragement that it has been receiving in the last five years. “But there is no question that the kind of respect we get from the Indian audience is much, much, more than what we get in Pakistan," says Khan. Sagar veena player Noor Zehra Kazim explains that only a few are genuinely interested in classical music in Pakistan. Those who do gravitate towards music, usually prefer pop and form pop and rock bands.

Unlike Khan and Saami, who have toured India several times, Kazim not only brings with her a fresh outlook towards Indian audiences but also a modified version of one of the oldest string instruments, the veena. Sagar veena, as the modified version is called, will mark its debut in India on 2 September. Born in Lahore, Kazim has been learning the sitar and veena from various ustads including the renowned Shareef Khan Poonchwale. She now performs on the sagar veena, developed by her lawyer-musicologist father Raza Kazim who has been working on this instrument for over 36 years. The instrument is unique because it has five octaves “and the sound you get from the compound effect of the human voice, is the same that you get from the sagar veena", says Noor Zehra, adding that it is still a work in progress. 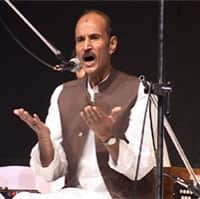 After a heated debate on the authentic lineage of the Dilli gharana at the workshop last week, Saeed hopes the programme will generate a similar interest among Delhi’s listening audience. He hopes to invite the same Indian artistes who participated in the Indian workshop to Pakistan later this year, for a similar workshop and seminar. “It’s time we did something for the classical artistes in Pakistan, who have absolutely no marketing ability unlike India," he says. In India, he’s not so much worried about the artistes being accepted, after all “Pakistan is a very fashionable thing these days".