Charles Dickens | Under the magic lantern

Charles Dickens | Under the magic lantern

For anyone who loves literature, the question of how literary work comes into being, of what relationship there is between the creation and the creator, is of an interest almost as urgent as that felt for the books themselves. When a writer gives us the gift of a character we cannot forget, of a scene or story that changes our relationship to our world, of a way of thinking that wakes us from linguistic or moral inertia, we crave a closer contact with that life and mind. These are the pleasures offered by literary biography, and they may be abundantly found in Michael Slater’s new biography of a man who we might legitimately consider the 19th century’s greatest writer, Charles Dickens. To a greater extent than some of Dickens’ earlier biographers, Slater emphasizes that the writer is worth understanding not just as a literary figure but indeed as a businessman. In Dickens’ time it was not very common for a writer to make a living from his books alone. Indeed, book publication itself was not the thing that we know it to be now. Most novels of the day—and most of Dickens’ novels—appeared first in serial form in weekly or monthly periodicals, accompanied by illustrations. Only later were some of them given the dignity and standing of book publication. 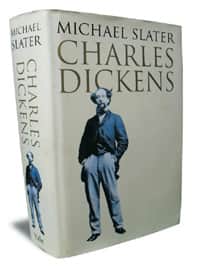 Indeed, Dickens’ greatest success was to to balance the competing pulls and pressures of literary artistry and commercial success. His stories are often melodramatic, but they are incandescent with marvellous metaphors, powerful descriptions of people and place, great flights of comic imagination, and also a sympathy for human frailties and an outrage at injustice perpetrated both by individuals and by systems. There is in them a luminous perception not just of particular characters and their predicaments, but also of an entire society. Slater describes the working notes that Dickens used to prepare to set up the structure of a story, and the way Dickens’ language, themes and characters develop across his career. Dickens’ sociability, infectious energy, and appetite for life and for narrative are in evidence everywhere.

In her short biography of Dickens, the novelist Jane Smiley remarks that the relationship between a novelist’s life and his work is not unidirectional, but rather dialectical. “Just as Dickens’s novels were in part commentary on his life," she observes, “so his actions, in part, grew out of the way that writing novels gave his feelings and thoughts specific being." In other words, just as Dickens wrote novels, so too did his novels in some way write him. The evidence of this claim is most fully worked out in Slater’s meticulously researched and readable biography.