The circles of social networking

The circles of social networking

It is a little more than two weeks old, in beta stage, and already has two million users across the world. It has already crashed twice because too many people were logged in at the same time. Its regular invites are being sold on EBay.com for 99 cents (Rs 44). A week after it was launched, Google’s marketvalue shot up by $20 billion. If you haven’t heard or read about it, you might as well have been living under a rock. Welcome to the latest rage in social networking, the Google+ Project.

Till now, social networking attempts by Google at best got responses such as “ahem" or an indifferent “so what?". Google Wave became nothing but a techie haunt, Google Buzz stopped buzzing within a few days of its launch, and Orkut failed to attract anyone but sleazy lurkers. All of them fell off the online radar, and weren’t missed much. 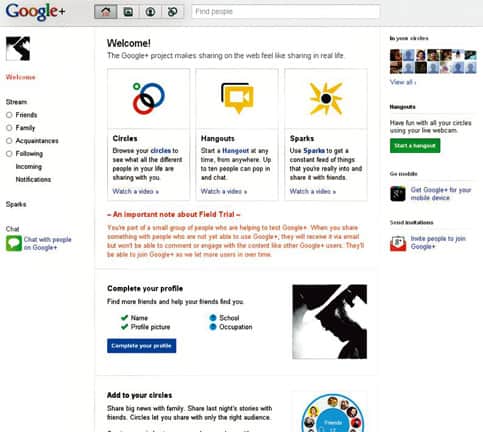 The social site revolves around Circles—which are specified groups of friends, family, acquaintances and the people you want to follow. You can create, edit and delete Circles with a simple drag-and-drop function. A tweet (@gstrompolos) describes the experience of putting the people you know in Circles as playing a never-ending game of solitaire with your contacts. Visually, that is what the drag-and- drop feels like.

Every time you put a status on the Stream (which is a copy of the Facebook Newsfeed, except the design is cleaner), you can choose which Circles can see that status. You can shoot anything from a link, a video, an update, your location or a photo down your Stream and view Streams according to the groups you have made. Moreover, you can disable resharing and ensure that your status message doesn’t go beyond the Circle or the person you intended it for.

It gives you control to neatly organize your online groups, view, share and talk to them without anyone else in other Circles getting to know about it. And it makes it easier than both the Facebook and Twitter lists.

We weren’t exaggerating when we said Google+ tries to integrate all the online concepts you are used to from Google and other online spaces—you can easily get used to the other features. Like Sixth Sense or StumbleUpon, the popular websites which suggest new things to read based on what you have liked already, Google+ Sparks is an inbuilt search engine which helps you find stuff according to your interests, and then share it seamlessly with your friends.

It uses Picasa, the popular Google online photo service, to upload and tag pictures through a simple drag-and-drop mechanism. Plus, the Google+ user can also make use of an unlimited amount of Google cloud space for photos and videos on YouTube. It also offers geotags for photographs, status updates and links which have become popular with websites like Foursquare. There are the usual social networking innovations you are used to from Facebook—notifications, pressing the +1 button to Like something, or pinging someone in a status message by writing their name with a “+" sign before it. Huddles is a group-texting feature—so you can text a particular Circle if you want to invite them for a function, event or just coffee.

Another feature we loved is Hangout—an online group video-chat concept. You can group-chat with as many as 10 friends at a time. The camera switches automatically depending on who is talking. All of you can even watch and search videos on YouTube together. When a video starts, the group chat mutes everyone by default—but you can always press Push to Talk to voice your thoughts again. Did we hear a “wow"?

Google seems quite focused on integrating all its services with the Google+ social experience. Gmail, Google Documents, Google Reader, YouTube, Android, Google Maps, Picasa, Blogger, Google Search—all these are integrated seamlessly, under one login ID and with a social experience overlaying them all. It could just change your Web experience.

But there’s a Darth Vader in all this. Google has a purpose, about which it is quite open. Till now, Google has been the kingmaker of the online advertising space and its plans for Google+ Project are no different. It is already planning the launch of Google+ for Enterprises in a month or so. Needless to say, Google would want users to spend more time on Google services (and Google+ is tempting enough), only to serve them with advertisements.

In other words, you are letting Google own your online life by giving it more information about you through this social network—your real name, interests, friends, things or people you want to avoid and the place where you stay. To be sure, networking sites such as Facebook also gather personal information about users.

Will Google use this additional information to create a personality chart for you and offer you more ads? Perhaps nothing comes for free—didn’t you already know that?