Making a noise at Flushing Meadows

Making a noise at Flushing Meadows

Some years ago, the New York City mayor changed the flight path of aircraft leaving the city’s La Guardia airport because the country’s largest tennis stadium was right underneath the path. Every 5 minutes, players had to contend with the engine noise of aircraft above. That’s how much the US Open tennis championships, the year’s final Grand Slam played at Flushing Meadows in New York—and beginning on Monday—means to tennis lovers.

It’s noisy, but who cares. It’s buzzing, and the crowds love the atmosphere. It’s the last chance for a tennis player to win a Grand Slam in a calendar year. The men’s and women’s singles champions take home $1.7 million (Rs8 crore) each, apart from up to $1 million as a bonus prize for doing well at the US Open series—a cluster of hard-court events played over two months leading up to the year’s final Slam. For someone like David Law, BBC Radio tennis commentator, the US Open can be inspiration enough to take up tennis as a profession.

Watching a US Open fourth-round match in 1991 at 11pm, between Jimmy Connors and Aaron Krickstein, Law says he sat glued to the TV set till 4am and missed college that day. But he made up his mind to make a career out of tennis. “That match still gets played on big screens during rain delays in the Arthur Ashe stadium today," remembers Law, communications director of the ATP Champions Tour—a tennis circuit for former World No.1s, Grand Slam singles finalists and Davis Cup winners. Feeling at home: Defending champion Kim Clijsters loves the US Open and is one of its more popular players. Reuters

Always a crowd favourite, Clijsters won the 2009 US Open after coming back from a layoff of two years (she retired prematurely in May 2006).

“It’s just the atmosphere of the venue and the crowd’s energy that’s different. It gives out a vibe that’s different and quite unlike any other tournament. The crowd support is great," says Clijsters. And she loves the music played between point changeovers.

Last fortnight, 2 points from defeat, she recovered to win the Western and Southern Financial Cup at Cincinnati, US, beating Maria Sharapova in a hard-fought three setter. Hard court is her favourite surface, so it won’t surprise anyone if she holds the trophy on 11 September.

Back on his feet 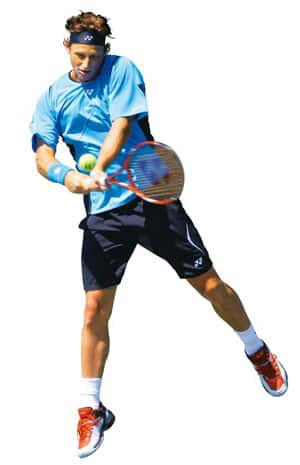 Watch out: Back from an injury layoff, David Nalbandian is raring to go. AP

“I will try to keep going. I’ve been out of the circuit a long time, and I’m really enjoying this time now," said Nalbandian at a press conference after he beat Soderling at the Rogers Masters Cup.

Yet to win a Grand Slam, Nalbandian, 28, is savouring every moment. “I just got a long break, and that’s made me think that I have two, three, four more years to play at a good level. That stopped me thinking and motivated me to come, to play, to enjoy it, and work on my last few years on the tour," he says.

Winning a warm-up event is still a far cry from winning seven best-of-five set matches in a Grand Slam, competing with the best players of the world, but with men’s No. 1 Rafael Nadal probably tired after a rigorous year, Nalbandian remains the dark horse.

A new coach, Paul Annacone, who has previously worked with Pete Sampras, a new attitude and a desire to win 20 Grand Slam titles (he has 16) seem to have boded well for Roger Federer. The former top-ranked player who has just turned 29 seems to be getting his groove back. He was in the Rogers Cup final and won the Western and Southern Financial Cup in Cincinnati.

“It’s nice knowing that the hard work in the off-season after Wimbledon has paid off right away. I’ve been committed to this sport for many years. When you do that and give yourself chances over and over again, you’ll break through by winning tournaments again," he said in a press conference after winning the title. Law says, “The best news for the game is that Roger Federer loves the sport of tennis with all of his heart and does not want to stop."

Ignore Federer at your own peril.