In the opening chapter of Jeremy Seabrook’s People without History: India’s Muslim Ghettos (co-authored with Imran Ahmed Siddiqui), the author writes: “The area of Topsia in Kolkata was, until recently, portrayed on city maps as a blank space, marked only by the words ‘liable to inundation’. Slums, trackless and impermanent, have no geography." 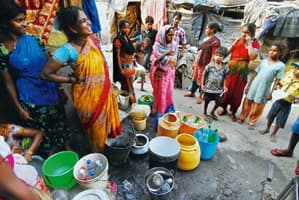 Moot point: Is faith the only differential in the lives of Muslim slum dwellers in Kolkata’s Beniapukur area?

Along with Beniapukur, Tiljala and Tangra, the other three main areas focused upon in the book, Topsia also happens to be among the city’s most densely populated Muslim neighbourhoods.

The stubborn, uninterrupted poverty of these places and their residents’ Muslim faith is the basis of Seabrook’s study into the lives of the Others. “There is a widespread view that little common ground exists between Muslims and the rest of humanity," the author notes. “This has become axiomatic for many…who contrast our ‘progress’ with their ‘backwardness’."

With the avowed intention of correcting this unhappy state of affairs, the British journalist and commentator stitches together a collage of urban lives caught in a whirlpool of crime, drugs, larceny, corruption, coercion, underdevelopment, ignorance, neglect, vote-bank politics and intrigues of land sharks. 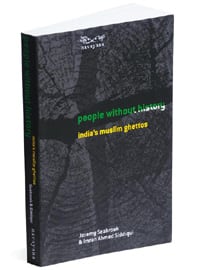 Most unsettling is the premise of the book that pits wider society against the largely Urdu-speaking Muslim slum population in Kolkata, and by the strength of notion, in all of India. Even as most interviewees in People without History testify, it becomes obvious that their circumstances are often not uniquely different from those living in, say, Kolkata’s and the country’s Hindu-majority slums: the other Others. The vortex of death, addiction, decay and exploitative politics is common to every urban Indian slum. Is faith the only differential in the lives of the Muslim slum dweller in Beniapukur and the Hindu day labourer in Dum Dum and Behala?

Much of the blame for the predicament of deprived Kolkata Muslims, Seabrook contends, should go to the Communist government that has ruled West Bengal for over three decades. Many will remember the strong indictment of Bengal’s Left Front government in the 2006 Sachar Committee Report on the social, economic and educational status of Indian Muslims, which held the state as a laggard when it came to employment and empowerment. Strangely, Seabrook spares but a few lines for the report.

Surely a government that takes pride in its egalitarian and secular credentials deserved keener cross-examination. While the Muslim vote bank has been an important contributor to the 34-year rule of the Communists in West Bengal, even their staunchest enemies would not accuse Bengal’s Communists of pursuing a communal agenda.

It is a historical backdrop that the book woefully overlooks, along with the fact that Kolkata silently drafted in millions of East Pakistani refugees. It found millions more from Uttar Pradesh and Bihar at its door. But over the last few decades, the city has seen no organized state-sponsored communal rioting; neither has it forced migrants or minorities out. Correspondingly, the state has been unyielding to right-wing Hindu parties.

And when the slum-dwelling Muslim computer graphics teacher Rizwanur Rahman fell in love with Priyanka Todi (the Hindu daughter of a city-based industrialist), married her, refused to buckle under every conceivable pressure, and was finally found dead on the railway tracks in 2007, the entire city erupted in collective anger until the government relented, heads rolled, and a CBI investigation was ordered.

Seabrook highlights the appalling lives of the poor and their tremendous urge to survive the odds in painstaking detail, but misses the forest for the trees. In the plight of the Muslims of Topsia, Beniapukur, Tiljala and Tangra resonates the plight of the city; one which has seen the flight of capital and opportunities to more profitable and less-politicized shores, leaving behind barely enough for all its citizens. Since then it has been a narrative of shared struggle and common shame across communities in the city.

Take, for instance, the story of Qutubuddin Ansari, which hasn’t found a place in the book. Ansari was referred to as the “face of the 2002 Gujarat riots" after the photograph of the Muslim’s tailor’s horror-struck face pleading for life was splashed in the media. Ansari would find a home in Kolkata after the state government pledged support to rebuild his life and business. In less than a year, Ansari would go back to Gujarat and his tailoring business. The promise of peace brought him to Kolkata; the lack of prospects saw him return.

It could have been the story of a city.