A space for gender-bending realities

Most sexual minorities yearn for normalcy. Talk to them and they all wish for a family

A beautiful young woman in a pink sari is admiring herself in the mirror. Her name is Deepika and she has been a woman for four years. Before that she was a man. Now, she is part of Chennai’s growing community of transgender women or Aravanis as they are called.

I am at Sahodaran, an MSM (men who have sex with men) intervention centre in Chennai. Its founder, Sunil Menon, a fashion stylist, choreographer and erstwhile cultural anthropologist, speaks with passion and empathy about alternate sexual lives. “People around you pick on you constantly and you end up feeling terrible about yourself. Why do you think there is such a high rate of depression and suicide among MSMs?"

Sahodaran attempts to alleviate these sorrows through its outreach programmes and drop-in centres, where MSMs can meet others like them and “have some jolly-jolly", as Deepika says. 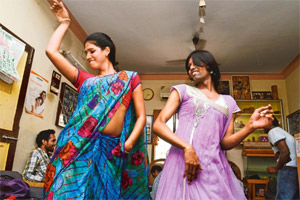 Deepika underwent an operation to have her breasts augmented and a vagina inserted. She lives with friends and learned about Sahodaran through its field officers. I ask how she makes a living. “Sex work," she says with a disconcerting smile. “I walk on the streets. Men approach me. If they pay me 1,000-2,000, we have sex," she says in Tamil. Does she like it? She shakes her head, the smile in place, and asks, “What else can I do?"

Transgenders are the focus of the new HIV/AIDS initiatives in India. At the recent AIDS 2012 conference in Washington, DC, India proudly documented a 56% reduction in the prevalence of the virus over the last decade. Going forward, non-governmental organizations (NGOs) working in this sector are targeting sexual minorities who, along with migrants and truckers, are a core vulnerable group.

Tamil Nadu, along with Maharashtra and West Bengal, has the largest number of community-based organizations (CBOs) working in this sector, according to a 2008 Asia Pacific Coalition on Male Sexual Health (Apcom) report that mapped sexual minorities by geography. Some transgenders are “she-males", who feel like women inside but do not have the means or money for a sex-change operation. They may wear feminine clothes but retain male sexual parts. They too earn money through prostitution. Homosexual men “specifically ask for she-males", says Deepika. Many are abused and beaten as they walk home at night. A car full of goons will pull up, drag them in, and do what they will. As Menon says, “There is no redress for sexual harassment against men."

Deepika is pretty—tall and slim with an hourglass figure. She spends the afternoon in Sahodaran, playing carom, singing and dancing to Tamil film songs. The gold standard for Deepika is Malaika, who calls herself a “big party animal".

The winner of the 2007 Miss Sahodaran beauty contest, Malaika also represented India at the 2011 Miss International Queen contest in Thailand. She meets people through the Internet and has posted her modelling photos on Facebook.

According to a 2010 United Nations Development Programme (UNDP) report, “the HIV epidemic among MSM and transgender persons…represents a major source of new infections in many countries in Asia and the Pacific". Organizations such as Sahodaran, Sahodari Foundation (focusing on transgenders and meaning “sister" in Tamil), Solidarity And Action Against The HIV Infection in India (Saathii), Sangama, People Like Us (PLUS), Naz India, Bharosa Trust and The Humsafar Trust, all work at decriminalizing and mainstreaming sexual minorities.

Sahodari plans to hold the country’s first transgender swayamvaram on 28 September. Its founder, Kalki Subramaniam, is looking for a husband too, she says when I phone her. Her voice is male but her photos depict a pretty woman. She wants a husband who is “bold" and unafraid, who can take on society.

Most sexual minorities yearn for normalcy. Talk to them and they all wish for a family; a filmi-style joint family even. They want to cook, clean, take care of in-laws and have children. Their biggest hurdle is societal stigma, because they are so obviously different. What will it take for the general public to accept people with alternative sexual preferences?

As a state, Tamil Nadu is a little better than others, according to Karthik Lakshmanan, a counsellor at Chennai Counselling Services. The state gives voter-ID and ration cards to transgender people. Lakshmanan advocates a quota system, like the “one used for SC/ST people to provide jobs, so that sexual minorities don’t turn to prostitution or begging".

Sandhya has a job. Clad in a shiny lavender salwar-kameez, with short hair, Sandhya proudly says she eschews “easy money through sex work", to work at e4e, a business process outsourcing (BPO) firm. “I really fought for this job," she says, and shows her company badge, which lists her as Santhosh Kumar. “That was before the operation," she says. Sandhya was the first transgender to work full time at e4e and since her recruitment, other transgenders have also been recruited. When I ask Sandhya why she fought so hard to get a regular job rather than sell her body, she replies softly, “AIDS".

Companies such as e4e are to be lauded for mainstreaming minorities. They present a potent way to prevent the spread of the HIV/AIDS virus in India. As someone who doesn’t intersect with this world on a regular basis, I am as prejudiced and/or tolerant as the next person. But given India’s commendable success in bringing down the prevalence of the HIV/AIDS virus, mainstreaming sexual minorities will provide a potent push in this area. One way to do this would be to support the NGOs that work in this area. Or appeal to your company to hire sexual minorities. Simpler still is to intersect with sexual minorities; not because they need your help, but because they are interesting.

Shoba Narayan wonders why swayamvarams fell out of fashion. Write to her at thegoodlife@livemint.com