With the social media becoming an important political battleground, is Facebook affecting friendships and trying to influence our political leanings?

When social activist Uthara Narayanan, 32, posted an innocuous article link on the Gujarat riots on Facebook in January, she was in for a surprise. An old friend from college fiercely defended Gujarat chief minister and Bharatiya Janata Party (BJP) prime ministerial candidate Narendra Modi, getting abrasive and personal in the post. “I had known her for more than 14 years and yet hadn’t seen this side to her," says Narayanan. “I didn’t realize when she had gone off and gotten such strong views on the debate."

From then on Narayanan decided to stay away from her friend though they live in the same city. “It left a bad taste in my mouth and marred our friendship for me, though I am still Facebook friends with her." Almost as if agreeing with her, Facebook’s wall automatically started keeping her friend’s posts away from her wall—thanks to the EdgeRank algorithm.

EdgeRank, the Facebook algorithm that decides which posts to show in your newsfeed, bases its decision on three factors: an affinity score between the user and the one who’s created the post, the type of post (comment, like, create or tag), and time lapsed since it was created. The first basically means that you will see posts from friends you have interacted with and like to interact with on the social network.

In January, Catherine Grevet, a PhD student at the Georgia Institute of Technology in the US, studied this algorithm in the light of politics and concluded that people tend to get attracted to circles of friends who affirm to their own political leanings, all because of Facebook’s algorithms. “People are mainly friends with those who share similar values and interests," Grevet wrote in the study. “As a result, they aren’t exposed to opposing viewpoints." Grevet presented the study at the 17th ACM Conference on Computer-Supported Cooperative Work and Social Computing in the US in February.

Alok Sharma, a Mumbai-based creative writer who used to be a political cartoonist, says social media has led to Indians opening up. “We are taught to be a little politically correct, especially in face-to-face conversations. But when it comes to social networking sites, Indians express their views like fanatics," he says. He blocked a couple of Facebook friends after a spate of personal comments on one of his posts. “My friends know me and get the crux of what I might be trying to say in a thread but there are others who are on my Friends list but don’t understand the context and take it all wrong."

The misunderstanding arises because many of us post on the network as we would speak among friends and not as we would say things in public. “Facebook is not a community, a clique or a group of friends," says Nishant Shah, director of research at Bangalore-based non-profit The Centre for Internet and Society. “It is just a network," he says. That means that not all people on your Facebook list are friends—you are just connected to them on the network. You might have a professional relationship with them, be teammates or acquaintances or colleagues, but you don’t know them personally. Given that the average Facebook user has 229 Facebook friends—according to the numbers from US think tank Pew Research Center’s Internet Project which tracks statistics about the social network—that’s just too many people to even know personally.

“The audience on the social network is much larger than the friend list, including Facebook itself, which, if it finds your comment problematic, will censor even before a complaint is produced," says Shah. A post on Facebook or a comment or a like, can get you in trouble not just with other individuals or communities who take offence but even the law, as happened to a girl in 2012 who put up a post criticizing the shutdown of Mumbai after the death of Shiv Sena patriarch Bal Thackeray.

“Though used like it, Facebook is not a conversation," says Shah, “Because everything you write is archived and recorded. And can be used against you if need be."

A medium to shout in

But would you shout at a stranger on the street as you do on Facebook? Basav Biradar, a programme manager based in Bangalore, actively posts on politics and comments on Facebook. He feels most people on Facebook give strong opinions that are not well-informed. “A lot of these opinions are dependent on propaganda and campaigns rather than facts. Why don’t people do some homework before forming an opinion?" With over 100 million Indians active on the social network, however, an uninformed opinion is hardly reason to stop anyone from posting, commenting, liking, offending and getting offended through posts on Facebook.

Shah calls this phenomenon cyber-bullying in politics. “Specific vocal and passionate groups and communities have emerged who silence any voice of dissent or critique by trolling the dissident," says Shah. “They do not need anonymity. They don’t try to hide who they are. They feel so empowered by the backing of the politicos who are either hiring or supporting them, that they have risen in hordes and are stifling the space for dissent and questioning even more effectively than they have been able to do in real life."

It’s almost like standing in a rally and hearing a swarm of slogans. Sashi Kumar, chairman of the trust Media Development Foundation that runs the Asian College of Journalism, Chennai, gives a similar analogy. He believes that the language of communication on Facebook is not written but oral. “Writing implies a well thought through opinion, whereas speech is responsive and involved. Within the Internet, there’s a strange morphing of written form which is expressed in a way of oral communication. You speak to someone on Facebook, you respond, you hear, you react, you communicate, you talk." He says that this morphing is leading society back to more oral forms of communication where written forms like newspapers will be a thing of the past. 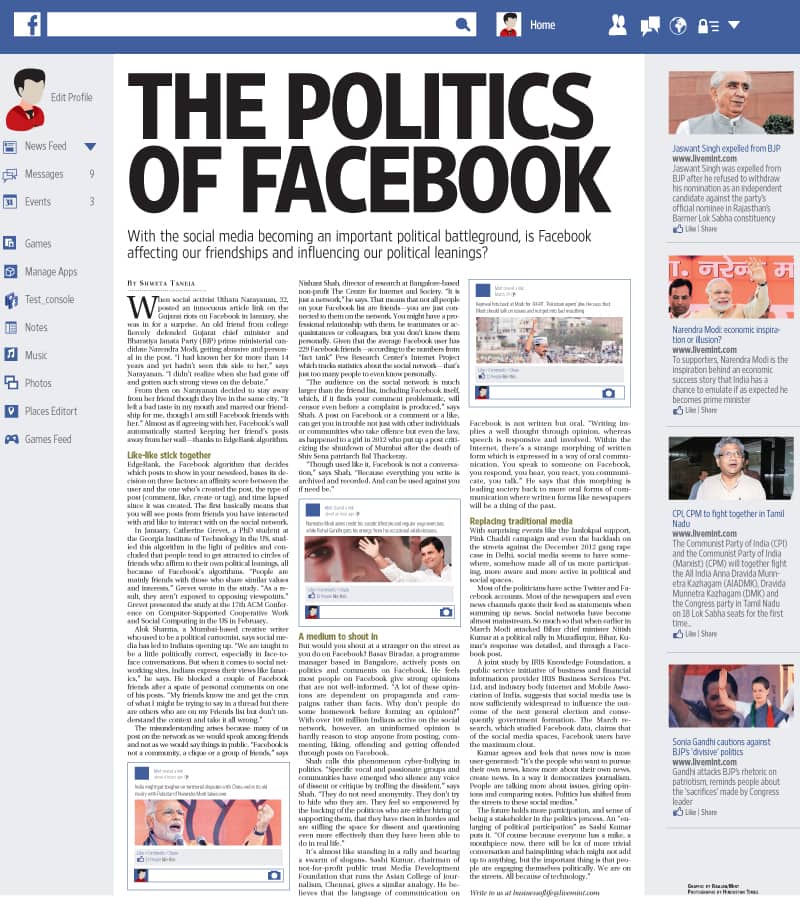 Most politicians have active Twitter and Facebook accounts. Most newspapers and even news channels quote their feed as statements when summing up news. Social networks have become almost mainstream. So much so that when earlier in March Modi attacked Bihar chief minister Nitish Kumar at a political rally in Muzaffarpur, Bihar, Kumar’s response was detailed, and through a Facebook post.

A joint study by the IRIS Knowledge Foundation, a public service initiative of business and financial information provider IRIS Business Services Pvt. Ltd, and the industry body Internet and Mobile Association of India, suggests that social media use is now sufficiently widespread to influence the outcome of the next general election and consequently government formation. The March research, which studied Facebook’s own data, claims that among the social media spaces, Facebook users have the maximum clout.

Kumar agrees and feels that news now is more user-generated: “It’s the people who want to pursue their own news, know more about their own news, create news. In a way it democratizes journalism. People are talking more about issues, giving opinions and comparing notes. Politics has shifted from the streets to these social medias."

The future holds more participation, and a sense of being a stakeholder in the political process. An “enlarging of political participation", as Kumar puts it. “Of course because everyone has a mike, a mouthpiece now, there will be lot of more trivial conversation and hairsplitting which might not add up to anything, but the important thing is that people are engaging themselves politically. We are on the streets. All because of technology."