Thanks for Visiting Mint
You seem to have an Ad Blocker on. Please turn it off in order to continue, or whitelist Mint
HOW TO TURN OFF AD BLOCKER
OR
REFRESH IF YOU ALREADY TURNED OFF THE AD BLOCKER
Home >Mint-lounge >History&#8217;s rusted nails

Long before novelist Orhan Pamuk began collecting artefacts of Turkish everydayness for his Museum of Innocence, Atiqa Bano was busy looking for rusting spoons and spectacles blinded by dust. She searched the houses of friends and neighbours and stumbled on century-old stone grinders lost in backyards; she picked up buttons broken off ancient cloaks whose wearers had died long since. With what she found, of Kashmir’s ordinary life and its people’s culture over the last decade, she has created a museum of Kashmiri ordinariness.

Meeras Mahal in Sopore, north Kashmir, is also housed in ordinariness. Unlike Pamuk’s museum in Istanbul, there are no Plexiglas coverings on Atiqa’s artefacts. No carpets adorn the floors. The wind often whirls the papers and blows decades into each other. It is a museum kept innocently in bare rooms, on rough wooden tables and in dusty corners.

A dozen walking sticks hang on a wall, all different in style and length, but somehow it is not hard to imagine who must have used which. “This one was carried by a fakir, and this long one was an imam sahib’s. There is one from a beggar, and one has a sword in it too," Atiqa says. On a nearby table, broken spectacles —some thick-rimmed ones that belonged to grandfathers with cataract—lie in a broken basket. “They are over 80 years old or maybe more," she says. 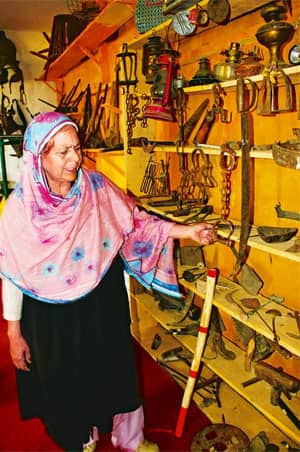 Bric-a-brac: Atiqa Bano in her museum. Photographs by Zahid Rafiq

It was while she was gathering old copies of Alif Laila and Moulana Rumi’s Masnavi that Atiqa realized there was something even more important worth saving, something that was disappearing without a trace. “I became acutely aware of the massive change that was taking place in our lives and the speed at which we were discarding things that were once essential to our life," she says. She saw that lanterns and wicks were fading into darkness and utensils indigenous to Kashmir were no longer being used. Local jewellery had suddenly become junk. “Many of the things of my own childhood were gone, and with it, ‘we’ of that time had disappeared too—as if that way of life had only been a dream. I decided to save that past for our children and grandchildren so they would know who they were and where they had come from."

When Atiqa was director, libraries, the staff worked meticulously. “She would enforce regular attendance to ensure that the staff were always on time. And she always kept an eye out for even a penny’s corruption," says Bashir Ahmad, a librarian in Srinagar who worked with her.

At Meeras Mahal, Atiqa works with a team of six young people who go to various villages to search for artefacts and then catalogue and preserve them. Most of them are found by word of mouth. Though most artefacts come free, they sometimes have to pay for them. Their costliest purchase is a 9ft coffin acquired from a mosque in a village in Baramulla for ₹ 6,000. “It weighed a tonne. Maybe more than that. And it is more than a hundred years old," says Imtiyaz Ahmad, a team member who transported the coffin to the museum. Just above the massive coffin dangles a small basket with three strings. “It is a baby’s crib," Atiqa says. “I kept them together."

Over the years, they have gathered numerous religious texts—mostly Hindu, Muslim and Buddhist. And there are nikah papers from the early 20th century and tonga permits from 1960s and 1970s. There are personal letters, locks and keys, baskets, and a treasure of earthenware.

Last month, when Atiqa displayed some of the artefacts at the Sangarmaal mall in Srinagar, she was overwhelmed by the response. For 10 days from 9am-9pm, she says, the room was filled with people. “Boys, girls, old men and women. Everyone came. It was much, much more than I had expected," says Atiqa. What excited her was the surprise of boys and girls at the sight of things they knew the names of, but had never seen.

“This is almost like a guillotine. It works in the same way," one of the visitors at her exhibition exclaimed on seeing an old rat trap.

Meeras Mahal is funded by the Kashmir Women’s College of Education in Sopore, a BEd college, but with the state now shutting down most BEd colleges, this funding might stop. “We will have to do something on our own, the government is not interested in these projects," says Atiqa.

In Kashmir, Shri Pratap Singh Museum, the state’s only important museum, has been constructing a state-of-the-art building over the last several years. It houses the swords of kings, gilded in gold, and shahtoosh shawls—more a museum of Kashmir’s grandeur than the dark history of its people.

The histories of a people, Atiqa believes, hide deep in the silos where they once concealed a little of their grain from the king’s soldiers; it lies not in the queen’s flowing dresses but in an old woman’s tangled hair caught up in the teeth of a comb. In Atiqa’s three-storey building, history lies scattered on unpolished tables and hangs from rusted nails.