It’s a lazy November afternoon and the newly opened resort Beyond in Nashik buzzes with activity as children chase imaginary mice, adults shiver in a small infinity swimming pool and the staff waits attentively. Rajeev Samant watches the action from one of the sunbeds, the customary glass of white wine in hand, alone for just that small moment before he is interrupted—either by the conversation of a friend or the concerns of his staff.

Samant, the founder and CEO of Sula Vineyards, mostly looks at peace—he said in a magazine interview once that he could live with little, like a monk—but he admits he is never content. Not when there is so much to do.

Beyond is the new 20-room resort opened about 3km from Sula Vineyards near Nashik. It is Samant’s latest offering, an extension of his growing business, a place that welcomes tourists with countryside delights of kayaking in the nearby Gangapur lake or cycling through rough rural roads watched by water buffaloes or merely lazing in the pool under the unusually hot winter sun. Of course, a trip to the winery, vineyard and the Tasting Room are naturally thrown in.

But this is just a small diversion to Samant’s greater plan. 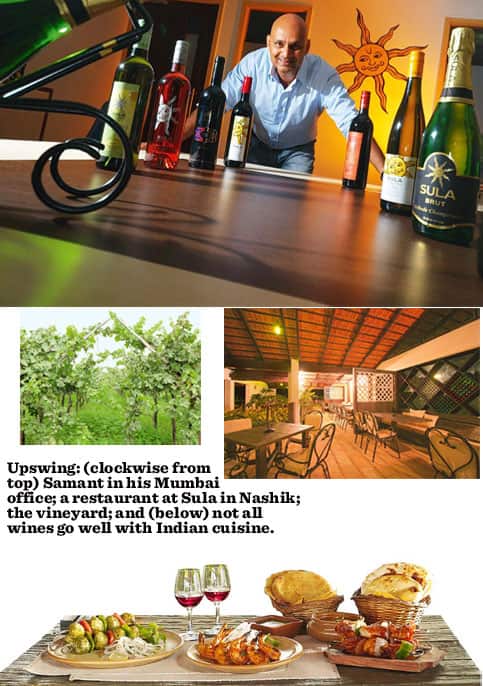 This effectively means Sula will double in size in the next three years after it starts a new winery that needs to be ready for the January 2012 crush. The expansion plans include this winery that needs to be built in 12 months at a new site separate from the existing one which is operating at capacity; planting another 1,000 acres of grapes in the next three years to add to the existing 1,200 acres; and supplementing the existing Sula staff strength of around 300.

The Sula CEO says the company needed the infusion of equity as their debt was a little bit on the high side. “If there had been another slowdown, it would have been tough. So this was a good time, sales are up 55% over last year. They say the best time to raise money is when the going is really good."

The going wasn’t really too good over the last few years. Luxury products are typically the first to take a hit from any economic setback and wine is one of them. Several growers of grapes in Nashik, for instance, removed their vineyards due to the uncertainty, but Sula had a plan.

He adds that people who want to drink wine but can’t afford Rs400 on a regular basis were dismissed as cheaper alcohol consumers but there were enough people out there who wanted decent wine. At Rs200-250, the wine would not be complex, adds the winemaker, but would be drinkable table wine. “Sula was always known as the most premium producer but we stood everything on its head and have become the leading value wine producer because that whole fortune at the bottom of the pyramid makes sense in India. You can’t get away from it. Today again, premium wine sales are going strong. Over the last couple of months, premium wines are outpacing value wines in growth. So we are back on track."

The moral of the story: “If somebody wants to get on the bandwagon, the pricing has to be right. Once the person gets on with the right pricing, he can climb the ladder."

The wisdom is completely self-taught. Samant’s over 10 years in the business came after the Stanford graduate quit a job as a finance manager with Oracle in San Francisco to chase a passion with family-owned land in Nashik. The wine business in the country was dominated by old businesses; Indians were typically not interested in what’s perceived as a more sophisticated alcohol; licences were difficult to get; and he had no experience. Today, Sula has 70% share of the estimated Rs500 crore wine market in India.

“I do not spend much time dwelling on milestones," says Samant. “The only thing that’s on my mind always is what has to be done next. We did throw a series of parties and celebrations across the country to celebrate 10 years of Sula and invited all our supporters and consumers. That was nice for sure. But it seems like a new milestone is happening every couple of months, so we just need to get down to the job on hand."

A week later, far from the quiet of Nashik’s farmlands, Samant is at the Cointreau (Sula distributes Rémy Cointreau’s brands) party at Shiro, Mumbai, where cocktails in plastic shakers are passed around, foreign models pose for tabloid pictures and loud music dominates any possible conversation. The company’s ability to adapt with the vagaries of the economy reflects in its founder’s ability to blend—with farmers in Savargaon and fashion models in Mumbai.

It’s a duality that keeps him strong in business, being able to interact with both ends of the spectrum, to negotiate with farmers and network with businessmen. Employees are seldom known to leave Sula while grape farmers have stood steady over the decade because of the company’s “integrity and consistency". “A grower is not going to leave Sula even if he is offered double the price," he confides.

“I am never content," Samant adds. “Let’s look at it this way. As far as what I have done in life, in material things, I am content. But with work and Sula, we have to move on to the next step, next level. Whether it’s quality, quantity, introducing India to wine..." he trails off.

“I am the chief wine evangelist in this country now," says Samant, “there’s lots of work still to be done."