Along the ridge of the valley, seven of us sat quietly in the minivan, gazing intently through our binoculars. Twenty-five metres away, on a snow-covered mound, a lone coyote scanned the landscape. An absolute silence reigned in the snowy wilderness. Just then the coyote took to its heels, plunging into the woods. The chirpy voice of our guide, naturalist Shauna Baron, broke the eerie quiet. “That’s a good sign, I think there could be wolves around," she said. Snowscape: (top) Coyotes on the prowl; and participants viewing wolves through the spotting scope. Photographs by D.K. Bhaskar

Straddling Montana, Wyoming and Idaho in northern US, Yellowstone is a landscape of superlatives: the first designated national park in the world, with the highest elevation lake, the greatest congregation of geysers and hot springs, and so forth. Spread across 20 million acres and dotted with hot springs and fumaroles, it is home to bighorn sheep, elk, pronghorn antelopes, bison and coyotes. The star attractions, however, are the packs of grey wolves—the top predator in these regions—that roam freely from one creek to the other, trawl the meadows and play hide-and-seek with prey.

Participating in the non-profit Yellowstone Institute’s five-day Wolf Discovery Program was something of a dream come true, but when I signed up I’d had no idea that our adventure would begin even before the sun rose, or just after or during a heavy snowfall. Part of the challenge of embarking on an adventure in sub-zero January temperatures and snow flurries was to be covered adequately from head to toe—a 20-minute exercise, starting with thermal inners and ending with balaclava—before we could begin tracking the landscape and its early warning signals.

True to Baron’s heads-up, minutes after the coyote had disappeared, the soft howls of wolves rent the air. Then, as we watched, four young wolves emerged from the forest, caution imprinted in their approach to the tiny creek 10m away. “That’s the Slough Creek Pack! There should be seven of them," Baron said excitedly.

I couldn’t believe my luck that they should be so close—park officials urge a distance of at least 30m—or even just the sight of them. For 10 whole minutes, the foursome prowled around the creek, looking for new prey and picking over the carcass of the previous day’s kill, before they were summoned back by the now-familiar howls from the rest of the pack, never to be seen again for the rest of our trip.

I had just brushed away a layer of snow from my 400mm lens and put a hand-warmer on my scarlet face when the radio crackled to life. A guide from another vehicle enquired, “Any wolf sighting at your end, Shauna?" All of us grinned ear to ear in response.

Some 70 years ago, wolves became extinct in Yellowstone. Despite large numbers of cougars, grizzlies and black bears, the absence of a keystone species led to an increase in elk numbers, affecting new vegetation. “It needed political will and important acts of wildlife protection to reintroduce them after nearly 50 years," says Baron.

Under the successful reintroduction programme in 1995-96, biologists captured 31 wild wolves in the Canadian Rockies and set them free in Yellowstone. The project so far has been an unqualified success. Today, there are more than 150 wild wolves in Yellowstone. A few have become part of local lore, such as Cinderella and 21M (one of the earliest males), who reared two dozen pups and contributed inestimably to the revival of wolf glory at the park, paving the way for annual average tourist income of $35 million.

The reintroduction of the grey wolf was also of major importance to the local environment: They controlled the elk population, thereby helping in the recovery of deciduous woody species such as upland aspen and riparian cottonwood, says Baron. “We’re learning so much about wolf behaviour in the wild that we didn’t know before," she says, adding, “Captive wolf populations, which had been our primary source of knowledge, are very different from those in the wild."

Often described as North America’s Serengeti, the wilderness of the Lamar valley—the venue of our five-day wildlife sojourn—is starkly beautiful, with its long, wide and open glacier-scoured basin. Apart from the wolves, we feasted our eyes on strings of elk moving along the iced river bank, an eagle swooping to pluck a hapless goldeneye from a break in the frozen river, herds of bison using their massive heads to shovel aside the snow for the scrubby brown grass, even as howling wolves echoed around the majestic landscape.

Early one morning, we witnessed a pack of 13—the Druid Peak pack—through a spotting scope. As we watched, the wolves played merrily on the soft snow, cuddling, nipping, nuzzling, teasing, romancing and taking turns to play with a dry tree trunk, an exquisite display of the soft side of nature in a species not universally known for its gentleness. Our feet and hands turned numb, but the sub-zero temperatures seemed to have no effect on the wolves, thanks, I learnt, to their thick coats and waterproof oily underfur.

If one could tear one’s eyes away from the wolves, one could also appreciate the winter landscape, breathtaking in shades of white, grey and black. In the distance, thick forests were enveloped in grey clouds, the spectacular terraces of mammoth hot springs in the northern range—one of the park’s greatest attractions—sending clouds of steam into the frozen temperature.

Three miles from the Roosevelt Arch, the park’s main winter entrance, is the 45th Parallel, a geographic line midway between the Equator and the North Pole. Here flows the cool, clear river called the Gardiner. Along its banks, hot springs bubble to the surface; the steaming water merges with the cold to produce very comfortable temperatures. It’s easy, as one slips into this natural spa pool surrounded by the Absaroka mountain range, to be disturbed only by the occasional elk or bison, to believe this is how nature meant it to be—and far-sighted conservationists, over a decade ago, just helped it on its way.

Apply for visas at 11 locations across India; interviews at US embassies in New Delhi, Mumbai, Kolkata and Chennai. Visas cost Rs6,288 plus Rs374 in service fees. 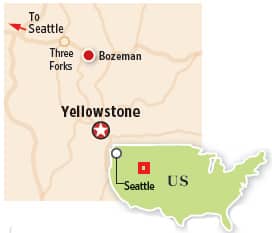 Fly to Seattle on American Airlines from New Delhi (Rs57,000 economy round-trip fares), from Mumbai (Rs68,000), from Bangalore (Rs70,000). Transfer to Delta to fly to Bozeman for Rs17,000. Bozeman is 145km from Yellowstone’s north entrance. Hire a car or request a shuttle lift from the Yellowstone Institute.

The Mammoth Hot Springs Hotel (www.travelyellowstone.com) is simple and rustic, with a good restaurant. In winter (till March), doubles start from $85. At Yellowstone Village Inn (www.yellowstonevinn.com), just outside the north entrance, doubles start at $69. Absaroka Lodge, located near the north entrance at Gardiner (www.yellowstonemotel.com), offers basic winter accommodation from $45; kitchen suites cost $60 (all rates per couple per night, plus taxes).

Some inns have their own restaurants, but I especially recommend the Chico Hot Springs Resort (www.chicohotsprings.com) for a fabulous meal, and their excellent wine list. The duck Grand Marnier is unmissable and the large natural hot pool with an open view of the mountain is a big bonus.

Get out of bed early—before dawn—to get a true measure of Yellowstone’s winter wealth. Apart from the wildlife, explore some of the 10,000 thermal features in the park. The geyser known as the Old Faithful is the most popular, partly because of its predictable eruptions. Besides, there are hot springs, fumaroles, mudpots and regular seismic activity.

When to go: Of the three million people who visit Yellowstone each year, less than

35% do the trip in winter. Yet, if wildlife interests you, there’s no better time to go, as long as you don’t mind missing the grizzlies. Wolf-sighting is a matter of luck, but the best place for it is the northern frontier, the only part of the park open in winter. Day temperatures range between -40 Celsius and -180 Celsius and average annual snowfall is 150 inches but, remember, there’s no such thing as bad weather, only bad attire. Dress in layers, and use good-quality warmers; otherwise you will pay a heavy price in frostbite.