In the good old days when I was shooting film, the Nikons, (the F4 in particular) were my trusted tools. But ever since I have unabashedly embraced digital photography, I have been gravitating towards Canons, the EOS 5D and EOS-1D series, for my professional work. Canon changed the consumer digital-SLR landscape forever when it launched the EOS300D for less than $1000 (about Rs40,000). The ripples forced D-SLR prices lower and Canon put digital SLRs into the hands of people who would otherwise never have considered one. Almost four years later, we have the third generation of their affordable entry-level series available in India—the EOS 400D, aka Rebel XTi in some parts of the world. This new camera is very similar in look and design to its predecessor, the popular EOS 350D. Very compact and relatively lightweight, the notable changes found in the 400D are a two megapixel bump up to 10 megapixels, a nine-point AF sensor, a great new dust removal system and a brighter, larger 2.5-inch LCD monitor with a significantly better 160-degree viewing angle. 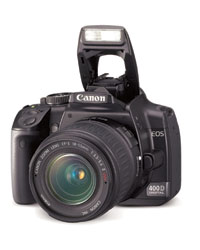 Canon for the people: For first-time digital users, the 400D camera may be the perfect option.

The 400D is quite a capable camera and performance was excellent in most respects—the 400D focuses quickly, shutter lag isn’t noticeable, and Canon rates it to shoot as many as 27 frames of JPEG or 10 frames of RAW before the camera hits a bottleneck and slows. Photo quality is silky, especially with a decent lens on the camera and the kit lens isn’t one of those. I love how small and lightweight it is, but its maximum aperture of F3.5 is simply too slow and doesn’t allow for a shallow enough depth of field. Having said that, shots taken even at ISO 800 were very clean, with low noise levels and good colour rendition. As on all of Canon’s D-SLRs, images are on the soft side straight out of the camera, and I had to turn up the in-camera sharpening to get the pictures I liked.

The exposure mode dial is on top of the 400D, which is split between traditional creative modes and automatic presets. On the creative side, there’s Program, Manual, Shutter and Aperture Priority, along with Auto Depth-of-field. Shutter speeds range from 1/4000 to 30 seconds plus Bulb in third-stop increments. Metering options are Evaluative, Partial and Centre-weighted; but sadly, there’s no spot metering. The automatic preset modes consist of Portrait, Landscape, Close-up, Sports, Night portrait, Flash-off and fully automatic. The controls for gaining access to various menu features and photographic controls are mostly arranged around the screen on the rear of the camera. I like the layout of the controls, and the quick access feature of some of the buttons to ISO sensitivity and autofocus modes saves time that would otherwise be wasted navigating the entire camera menu system. Also, the central “set" button provides a quick access route to the picture styles menu. Basically, the picture style feature provides five preset image “looks" (combinations of colour, tone and sharpness) that replicate the results on different kinds of film, as well as three user-definable presets.

The small pop-up flash is great for fill-in light in the harsh outdoor sun with a top flash sync speed of 1/200. Disconcertingly, a few rapid pre-flashes fire before a picture is taken causing a slight, although barely noticeable, lag before the picture is taken. Importantly, the 400D is also compatible with Canon’s comprehensive range of EX external Speedlites if you need it. The camera doesn’t have a PC sync socket for use with studio flash but you can easily get around it by attaching an adaptor to the camera’s hot shoe. The EOS 400D takes CompactFlash memory cards, which fit into a slot beside the battery.

Canon includes several software products with the 400D, ImageBrowser is for the Mac, while ZoomBrowser is for Windows PCs and can be used for downloading images from a camera (via the EOS Utility program), viewing and printing your photos, and editing them as well. ImageBrowser/ZoomBrowser can also be used to edit your RAW images. So what’s the deal with RAW, anyway? RAW images contain unprocessed image data straight from the camera’s image sensor. Since the data isn’t processed on the camera, you must manipulate it yourself in your computer’s digital darkroom to tweak your photos and save it in formats of your choice like TIFF or JPEG. Both ImageBrowser and Digital Photo Professional (also included) can edit all the major RAW properties such as exposure, white balance, sharpness, contrast, and colour. The EOS Utility program also lets you control the 400D over a USB connection. You can set virtually all settings right on your Mac or PC, just click a button to take a picture and the photo is saved to your computer’s hard drive.

The “affordable" Canon EOS 400D retails for Rs50,995 in India but it offers great photo quality and performance, plenty of features (most notably, a dust reduction system), a large LCD, and plenty of accessories. If you are looking for your first digital SLR, the Canon EOS 400D represents great value for money and is definitely worthy of serious consideration.

Tell Harsh what you want him to review at gizmoguru@livemint.com