Home / Mint-lounge / Features /  Justice A.P. Shah | Judge of the brave
Back
Share Via

If there’s one phrase that justice A.P. Shah associates with the safeguarding of freedom of speech in India, it is the common and overused lament of “hurt sentiments".

In case after case, PIL after petition, the 62-year-old architect of the landmark judgement that decriminalized homosexuality in July 2009, has had to deal with knee-jerk outrage disguised as community sentimentality. “Any person who believes in democracy should be worried by this trend in our country," he says. Dressed in a crisp formal shirt, and speaking in precise, carefully weighed sentences, Shah shakes his head as he outlines his concern. “Intolerance is growing in our society. A reply to something one objects to cannot be made with violence. That is no way to move the public discourse forward." The examples are easy to recall—from the attacks on news channel IBN 7’s offices in November to the furore over actor Khushboo’s comments on premarital sex and calls for censorship of films such as Deepa Mehta’s Water. “It’s the duty of the court to protect this freedom at every opportunity."

Freedom of speech and expression (“Our courts have consistently maintained this is the most precious of all our rights—the ‘ark of democracy’, ‘the lifeline of any democratic institution’") is a big deal to justice Shah. It’s been one of the cornerstones of his tenure as a judge—first as an additional judge of the Bombay high court till 2005, then as chief justice of the Madras and Delhi high courts. His judgements— from making Chennai’s buses handicapped-friendly to improving living conditions in prisons—have been described as inclusive, reasoned and sympathetic to the marginalized. “I strongly felt that separating people with disabilities or handicaps to ‘special’ institutions should be done away with. It should be made visible, brought into the mainstream." 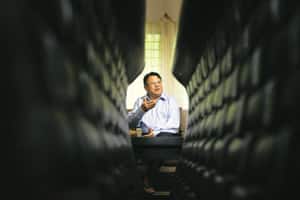 After graduating from the Government Law College in Mumbai, he practised first in Solapur, then Mumbai. “You could say I was a successful lawyer, if not an activist one," he says. He was appointed an additional judge of the Bombay high court in 1992. “Judgeship changed everything. You look at life in a different way, and you’re always involved in a learning process," he says.

An early important case in 1997 involved two documentary films by award-winning director Anand Patwardhan—In the Memory of Friends and Ram ke Naam. “Doordarshan had a policy of telecasting the national award winners on prime time, which they refused to do in this case for frivolous reasons." Shah dismissed the arguments, and the films were aired. “The state cannot prevent open discussion and open expression, however hateful to its policies," the bench wrote in the judgement. He quotes a distinctive Supreme Court observation that suppression of freedom of expression must only be exercised if the offending thought is the equivalent of a “spark in a powder keg".

During his stint in Mumbai, Shah also ruled in favour of reservation for dyslexic students in Maharashtra classrooms, a move that has dramatically increased the public understanding and acceptance of the condition. “Things are getting better (for people with disabilities)," he says. “But there is still an alarming lack of empathy."

Shah shifted to the Madras high court in 2005—a move that proved challenging. It was a stint marked with volatility and political manoeuvring. “Bombay has a great Bar," he says. “Madras is slightly different. It’s racked by casteism, and a lot of internal politics." Soon after his appointment, he ruled against then chief minister Jayalalithaa in a case filed against the political magazine Nakkheeran. Jayalalithaa accused the magazine of defamation after it published an article that alleged she was “taking 4,500mg of tablets every day." Shah dismissed the argument, calling for public officials to be more open to criticism.

A year later, he judged a case brought against a film based on reformer E.V. Ramasamy Naicker, or “Periyar". “The Ramayana has this story that Ram touched the back of a squirrel, which is why it has those distinctive marks," Shah says. “Periyar had written a satirical piece asking—if that’s true, how come there are no marks on Sita’s back?"

Shah was also involved in dismissing the call for banning the film The Da Vinci Code on the grounds that it hurt Christian sentiments. “The foundations of these faiths, or groups, can’t be this fickle," he says.

Shah was appointed chief justice of the Delhi high court in May 2008. He introduced an important amendment to the Right to Information Act that brought the office of the Chief Justice of India under the Act’s jurisdiction.

His landmark 105-page judgement on section 377, which decriminalized homosexuality, was a culmination of the issues Shah has been involved with. “Strangely enough, the homosexuality issue came up many years earlier, in 1997," he says. A visiting delegation of German legislators had brought up the law in the course of a discussion, asking why an Indian court could not strike it off. “I made an off-the-cuff remark at the time, and said it would be difficult for an Indian judge to rule in favour of it. Little did I know I’d be that judge a decade later!" Shah retired from the Delhi high court on 12 February.

Retirement, however, hasn’t lessened Shah’s zeal. “It’s only been five months, and it all feels so hectic," he says. In June, he travelled with Medha Patkar and Narmada Bachao Andolan activists through “many districts and “affected areas", analysing issues of displacement and environmental destruction. “This was a moving experience for me," he says. “I visited a large number of villages, spoke to people, and headed a people’s tribunal appointed to have a public hearing on the issues."

In July, he was involved with a Delhi-based NGO called the Housing and Land Rights Network, which released a report that found funds meant for the benefit of scheduled caste communities had been diverted to build Commonwealth Games infrastructure.

“I’ve decided not to accept any formal assignment, or 10-5 jobs," Shah says. “But I have to sustain myself with some professional work—so I occasionally act as arbitrator, or do some routine legal work," he says.

Shah is currently involved with an issue brought to his notice by a group of NGOs. “There’s an alarming new trend of abortions taking place when the parents find out that the foetus has developed deformities or disabilities," he says. “This is a tremendous prejudice against the disabled. When it starts there—a decision not to give birth because of a disability." Shah hopes to get involved in a campaign to spread public awareness of the issue: “That is the first step. A small, but important one."