In one of the most cheerful poems about death ever written, the Turkish poet Nazim Hikmet imagines his coffin being taken out of the courtyard, his face open to the skies. Even when dead, the poet chooses to continue to celebrate life. People will cluster, especially children, who are unafraid of death. “A pigeon might drop something on my brow, for luck," he muses, and “the washing in the balcony might wave to see me off". The sombre act of passing, marked by silence, gloom and tears, becomes here an exuberant parade, with the dead man its still centre. 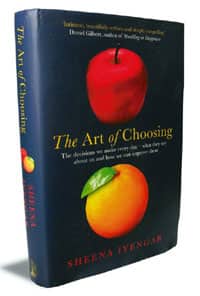 A key element in choice studies is the practice of choosing not to choose, or voluntarily ceding control over key aspects of one’s life to others or indeed to an abstract entity such as God or fate. Why do some adults allow their parents to choose a match for them, thereby setting up for decades of family life on the basis of a few meetings with the chosen spouse? Isn’t it better to go to a place of worship when one wants to be in God’s presence rather than at certain predetermined hours of the day or week? Why do comparative studies of believers and atheists almost always show the former group as being happier and more resilient? “Restrictions do not necessarily diminish a sense of control," observes Iyengar, “and freedom to think and do as you please does not necessarily increase it." A world in which everything is open to negotiation can be a very confusing and frightening world.

Choice is often seen as the absence of restraints, whether economic, political or social, the better to allow human beings to make up their own minds. But as Iyengar shows in a fascinating set of examples, this kind of freedom—which we might call a “freedom from"—is only one aspect of freedom. For this kind of freedom to be truly meaningful, it must be complemented in some measure by a “freedom to"—the means to realize our full potential. Many East Germans who celebrated the fall of the Berlin Wall in 1989, and the end of political checks on their freedoms, later found themselves nostalgic for the stability of the Communist regime, feeling there were too many pervasive inequalities in the new Germany.

This difference in the understanding of what choice means—one approach valuing the equality of opportunities, the other an equality of outcomes—has become a classic fault line in politics, dividing right-wingers from left-wingers.

Iyengar carefully lays out a set of maps of choice, supplying patterns of causation and correlation. What is seen as a good choice is often culture-specific, depending, for instance, on whether the culture in question tends towards a valorization of individualism, like many Western societies, or collectivism, like many Asian ones. Much of our choice-making is irrational, subject to forces such as social pressures or the temptations of the moment. We make certain choices not just as an expression of who we are, but also for others to see us in a certain way—a fact that is exploited by advertisers. Sometimes too much choice puts us off completely, making us unhappy with our eventual choices because we feel we might have missed out on a better option.

Increasingly, we live in a world marked not by a scarcity of choices, as our ancestors did, but by a superfluity. This means we have to rethink our attitude to choice, which may no longer be an unconditional good, and become better at managing our expectations and practising the arts of choice. A vast subject is skilfully probed in this astute, practical and often pleasing book.