Masaharu Morimoto is probably more famous in India than he is anywhere else in the world. He came to fame as the executive chef of the first Nobu in New York and says that he helped conceive the menu of that restaurant with the eponymous Nobu Matsuhisa. 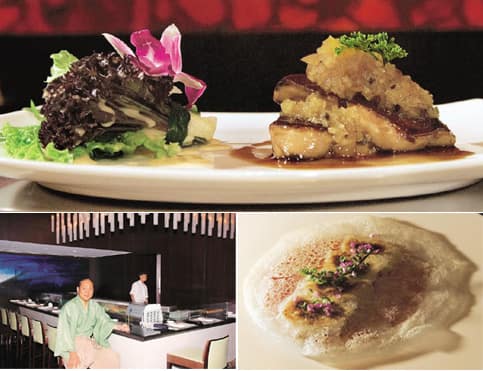 Made in India: (clockwise from top) he grilled foie gras developed by chef Vikramjit Roy; the Pork gyoza is a disappointment; and chef Morimoto. Priyanka Parashar / Mint

But Morimoto was pleased by the restaurant’s instant success (he mentions the Mumbai operation in his book) because it made him the first Japanese chef to open in India. The Taj suggested that he stick to the Nobu formula and the Wasabi menu was largely borrowed from the Nobu roster of dishes. And the vegetarian half of the menu consisted of dishes invented by the Taj’s Hemant Oberoi (Japanese chefs are not very good at cooking for Mumbai Gujaratis).

By the time the Taj was ready to open the second Wasabi at Delhi’s Taj Mahal Hotel (the “Taj Mansingh" as it is nicknamed), there was no doubt that the formula worked well in India. But there was still the shadow of Nobu hanging over the menu. Two years ago, when I met Nobu, he claimed that he had asked Morimoto about the Indian market and that Morimoto had replied “Nobu-san, 90% of my menu is the old Nobu menu" (at that stage, Nobu was planning to come to India with the Leela group—but that fell through).

I’ve only eaten in Morimoto’s Chelsea restaurant once but I was startled to see that the food he served in New York was distinctly his own and quite different from the Nobu rip-offs he served in India. What’s more—judging by that one meal at least—the food was excellent.

Now, two years after Wasabi opened in Delhi, the restaurant has a new menu that retains most of the old Nobu favourites (Black Cod in Miso) and the Morimoto specialities (White Fish Carpaccio), but tries to go beyond the formula and invent a cuisine that is more Wasabi than Nobu.

For instance, the Toro Tartare (Rs1,250) is no longer the Nobu dish of chopped tuna belly topped with Sevruga caviar. Instead, the restaurant now has the version Morimoto serves at his own restaurants in America, a pretty mosaic of caviar, avocado, cream cheese and flying fish roe along with the tuna. It is a dish you eat with your eyes and if you like raw tuna, you will like the combination of flavours.

There is also Morimoto’s take on the traditional Japanese dish of Pork Kakuni (in which the pork is slow-cooked for 18 hours so that it melts in your mouth) made with pork flown in from Kobe (it tasted like Kurobuta pork to me but it is not described as such on the menu, so I may be wrong). I had Morimoto’s version in New York but the Wasabi dish is even better (at Rs1,750 a plate).

Some dishes have been tinkered with—to their detriment. A gyoza is a Japanese momo but the Wasabi version (unlike Morimoto’s) looks like one of those deep-fried Beggar’s Purse things they make at Punjabi Chinese restaurants (though this one costs Rs1,250) to no great acclaim. The day I went, the pork was too dry, and the cooking let down the dish.

But the triumphs are the restaurant’s own inventions. A grilled scallop in an onion shell (Rs1,450) was devised by Wasabi’s chef Achal Aggarwal and will be one of the more popular dishes on the new menu. The standout dish was a brilliant foie gras with teriyaki jus and pineapple carpaccio, invented in Delhi, by another Indian chef, Vikramjit Roy. This is a dish that Morimoto would do well to steal for the American restaurants.

Otherwise, the restaurant is as it was. The sushi is made by Japanese chefs sent by Morimoto, the teppanyaki cooking remains hit and miss (unlike Mumbai where it is perfect) and the prices are as extravagant as ever. I have been there often so I am not sure my opinion of the service counts for very much because they know me. But, in service terms, I reckon this is the best restaurant in India, unblemished by the air of snobbery that sometimes infests the Mumbai outpost. It helps that Akshay Tripathi the manager is easily the finest restaurant manager in the country and one of the Taj group’s stars.

Should you go? If you like modern Japanese food, then yes. If you are familiar with the old menu and want to see how the kitchen has evolved, then yes, of course. But bear in mind that this is India’s most expensive restaurant (though I guess you fat cat Lounge readers may not care about these things).

To pay these prices you must either regard food as being a very high priority in your life or you must be on an expense account. Or both!