December marks a season in Chennai when every Carnatic music lover spends his days walking in and out of a series of kutcheris (concerts) at the sabhas which showcase every bit of talent we have in this music form. Amid this milieu of classical and traditional-bound music, Anil Srinivasan, a celebrated pianist, has decided to do more than just perform.

He is organizing Festival of Parallels, to be held over three days this coming fortnight, as a first of its kind discussion-cum-performance forum that seeks to address and understand various aspects of the Indian Carnatic and Western classical styles. The aim is to stimulate the minds of music lovers and enable them to understand the nuances of music composition and styles.

During his research, Srinivasan discovered that several parallels can be drawn between Carnatic music and the Western classical style of composition. “For the longest time I have realized that we really need to explore the process behind creating compositions, irrespective of which part of the world or which discipline of music we are trained in. This performance and conference model was to create a larger platform for a mental endeavour in an open workshop format for musicians and music lovers," he says. 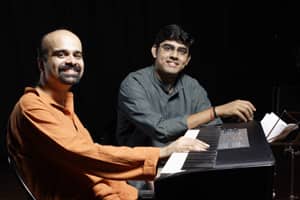 In a day and age when more youngsters are turning to music that is blended or fusion, it is a wonder that there is still an audience for such endeavours. But the lecture-concert series is seeing a good response from practising musicians, music rasikas, even students. The greatest response has been from students studying both classical and contemporary music. Says Gurucharan, a well-known Carnatic violinist: “I think this is the best time. If someone had spoken about this concept 10 years ago then there certainly would not have been as much interest as such a festival has generated today. Music is a universal truth without boundaries and cannot be contained within the limits of country borders. Carnatic musicians are travelling all over the world and are receiving their due respect, so it is time for musicians and music aficionados to learn and explore the grammar behind Indian and Western classical music."

While Srinivasan himself has collaborated with different musicians in the past, he does not look upon these lecture concerts as a platform for the collaborative music that has resulted in some very popular fusion between Western and Indian styles. He says: “The workshops are more about getting into the process of music composition. If compositions are created after understanding the basic grammar, styles and thinking, then we certainly will have achieved what we set out to do with this festival." The support shown by respected sabhas, which have offered their venues to host programmes is perhaps another indication that audiences are now ready to learn, and not just listen to, performance music.