Your favourite books, on the digital highway

Your favourite books, on the digital highway

After 244 years, the Encyclopaedia Britannica announced earlier this month that it would stop publishing its 32-volume print edition. Forever. A month ago, in February, a digitally enhanced version of the Game of Thrones, the first book in the much-touted fantasy series A Song of Ice and Fire by George R.R. Martin, was released as an eBook for iPad. The “book" is much more than a reading experience. It comes with a pop-up column of a glossary of characters and a dynamic map which tells you where all the series’ characters are at any point in the book. To add to the fun, there are clips from the audio book. To call it a book is like asking Marvin, the paranoid android from The Hitchhiker’s Guide to the Galaxy, to get you a cup of coffee. 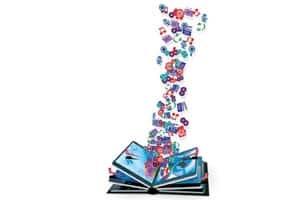 “Enhanced eBooks are not eBooks, or digital versions of books," explains Sriram Panchanathan, 41, the Bangalore-based senior vice-president of Digital Solutions, part of the US-based Aptara Inc. “They are something else altogether. They have additional features to an eBook that complement or add to the reading experience." Aptara works with some of the biggest publishers worldwide, like John Wiley & Sons, Pearson and Random House, and digital publishers like Inkling (www.inkling.com) to create digitally enhanced eBooks of their content. Their most recent titles include The Professional Chef, The Culinary Institute of America for John Wiley & Sons and Meggs’ History of Graphic Design, a self-published title.

According to Panchanathan, you can completely change the experience of reading a book on a touch-screen gadget with extra elements like audio, video, multimedia, scripted animation, a dictionary, or an interactive interface. “A year ago, publishers started with enhancing children’s and educational books with graphics, animations and audio and video but now we see a demand from them to convert non-fiction categories like cookbooks, books on gardening and even biographies," he says. Take the example of the forthcoming enhanced title from Penguin of Malcolm X: A Life of Reinvention by Manning Marable. It’s a biography of the legendary black activist, features rare archival video footage of his life and photos, and has an interactive map of Harlem, Manhattan, to better visualise where he came from.

What’s helped obviously is that publishers now have the tools to embed multimedia in a digital book in a fast and cost-effective way. Epub 3, the latest update to the open eBook format .epub, and its counterpart, Amazon’s Kindle Format 8, were both released in October. While the .epub version 3 works for almost all touch-screen eReaders, including Android-based tablets and the Nook, Cobo and Sony tablets, Kindle Format 8 works only for Kindle Fire devices. Both formats use HTML 5, which can be used to embed multimedia elements directly into the eBook file, making it look much like a website. “This reduces the cost and size of an eBook and gives creators, the ability to experiment with styling, animation and scripting," says Panchanathan.

Earlier this year, Apple added to the frenzy by launching iPad-enabled versions with iBooks 2.0 and a free application for Mac, the iBooks Author (for Mac users with OS X Lion only). The latter can be downloaded for free and makes the task of converting a textbook into a colourful, interactive, multimedia entity a breeze. The end result is something you can swipe to annotate, highlight, listen to embedded audios and videos, see slide shows, tap words for definition, pinch and zoom and generally do all the things that you do while playing a game on the iPad.

The software is so easy that an individual author can do it all himself. This is why Ashok K. Banker, 48, an Indian author who has self-published for Kindle, is already planning to create a non-fiction series on mythology for iBooks 2.0. “I want to reformat the research I have done in the past and create informative, interactive books for the iPad which will help in increasing sales of my titles," he says. Banker chose to become the publisher for his eBooks last year and launched his own imprint AKB eBooks (www.akbebooks.com) to put up digital formats of his books on Kindle. “The tool for making enhanced eBooks by Mac is hugely empowering. I don’t need a designer or a publisher. I don’t need to spend a lot. All I need is my time, which I am willing to give," says Banker.

The Indian eBook market, however, remains woefully sparse when it comes to publishers thinking of enhanced eBooks, though there are many successful companies in India working on technologically enabling eBooks for publishers worldwide. “There is a lot of interest by publishers to embrace new technologies in India, but not many have jumped into it yet," says Prashanth H.M., 42, head, corporate strategy, Excel Soft Technologies Pvt. Ltd, Mysore, which has developed a platform called Saras to create touch-screen eBooks specifically for e-learning. “The economics of creating enhanced eBooks might be too high to experiment with, considering the market for them is still nascent."

Enhancement of a single eBook, if the publisher takes the service from firms like Excel or Aptara, can cost anywhere between $500-5,000 (around ₹ 25,450-2.54 lakh) or $1-10 per page depending on the bells and whistles they want to add. Then there’s the size factor. A regular eBook in ePub or Kindle format is around 1-2 MB in size but an enhanced eBook is as big as 100-200 MB in size, which means it can become a download nightmare in India where Internet speeds are still woefully slow. It also limits the number of books one can carry in one’s device.

Banker says: “There is a fear in Indian publishers about the loss of control that the digital age represents. Online publishing directly empowers me as an author to put my creation online and you as a reader to buy it." But he concedes that publishers are willing to learn, by force or by acceptance, since the market is already changing.

“Since the pace of innovation is so fast, it’s hard to predict what the future will be with these eBooks. I feel the very boundaries of what we think of as a book will get tested," says Panchanathan.

While publishers ponder which way the wind will blow, have a look at the experimental enhanced eBooks out there

This fantasy book series by George R.R. Martin was made into a successful TV series last year. Now it comes back as an enhanced eBook version, launched by HarperCollins earlier this year.

A list of books cannot be complete without a Sherlock Holmes story. This abridged version, created by Byook and released in February last year, comes enhanced with soundtracks and marginal illustrations. The soundtracks are not made of background music, but background noises (including blood-curdling screams while you are reading) which help you immerse yourself in the story and sometimes make you jump out of your skin. When there’s a murder, blood will spread out on your pages. When there’s rain, droplets will fall on your page. The text appears handwritten on a journal with ink spots. The sepia tones and the newspaper-cut illustrations add to the retro feel.

Developed by TouchPress and released in December, ‘Skulls’ is an interesting story about Alan Dudley, a skull collector who was arrested for his hobby. But what makes this one unique is richly illustrated, stunning visuals. The photo gallery of the book contains pictures of more than 300 human and animal skulls. The pictures of skulls can be enlarged and rotated 360 degrees while studying. You can also put on 3D glasses and view the images in 3D. The skulls can also be searched by their family, class, group and behaviour, making this a good reference book.