The day Sanjay Verma landed in Delhi in July, he hot-footed it to see Gangs of Wasseypur Part 1. The 41-year-old, Shanghai-based Cushman & Wakefield Asia-Pacific CEO misses not being able to see Hindi movies in China. “I can work out of anywhere in Asia and that’s why for two months when my children have a school break, we move to India."

An Anurag Kashyap fan, Verma says, “The first part of Wasseypur could have been done in 11/2 hours but that is not the Anurag Kashyap style. This is unapologetic moviemaking at its best."

Verma, who took over as Asia-Pacific CEO two years ago, travels two weeks in a month and is happy with Shanghai as his base (for Cushman, as for every other company, China is key). But since other centres are equally important, Verma has ended the concept of a regional headquarters and spread his leadership team across Singapore and Hong Kong. “If everyone is in the same place, only strategy meetings happen and people get out of touch with what is happening in the market," he says.

“The Asia business is just 13 years old for us. In the next three-four months, you will hear that we have acquired 10-15 people at senior positions in Asia. We are growing our business here because our scale here is not proportional to the brand’s image. Currently, we are in ‘the balancing the platform’ phase in Asia."

Insisting that the blinds be raised so that I can view Gurgaon’s skyline from the 14th floor, Verma, dressed in a formal navy blue suit, excuses himself for a few minutes to sort out a household glitch over the phone. “When I first joined this business, it was important to establish credibility and to differentiate myself from the general perception people have about ‘property dealers’. People used to think that we were not educated enough so I always wore jackets to overcome that perception," he had explained previously when I had wondered how comfortable he would be in a suit in the sweltering Delhi summer.

An electrical engineer from the Delhi College of Engineering (now Delhi Technological University), Verma chose a career in real estate quite by accident. After a three-year stint as a team leader, engineering projects, at Voltas Ltd, Verma joined the Management Development Institute (MDI), Gurgaon, for a master’s in business administration in 1995, majoring in finance and marketing. “A bit of me wanted to be a banker, another wanted to be in sales and marketing. Then there was a bit that wanted to be a copywriter in advertising. The sales and marketing dream got killed when I did a summer internship at Dabur in 1996."

Building Blocks: Verma misses not being able to interact directly with clients all the time. Jayachandran/Mint

It was pre-placement talk at the MDI campus that convinced Verma to appear for a recruitment interview with Colliers Jardiene, a commercial brokerage firm operating in India. “I had read that a part of the job in the services side of real estate dealt with investment and this excited me, as did the fact that realty was not an established industry here but was well-entrenched in Europe and the US."

But joining an industry that is not well-established had its challenges. “Initially, it was tough to explain to my parents what exactly my job was. For a few years, I left it vague and they just knew I worked with a multinational company with a fancy name. I don’t think they would have been too thrilled with the idea of their engineer son turning into ‘a property dealer’," he laughs.

Verma’s parents, both educationists who hold PhDs in Hindi, are based in Dadri, a small town 2 hours from Noida, adjoining Delhi. Verma, who studied in a government school in Delhi, says he was surrounded by Hindi literature when he was growing up and even today this is the other thing he misses about not living in India. “Kindle is of no help. You just do not get Hindi books to read on it," he says.

It was not just Verma’s parents who needed convincing; in the late 1990s, it was tough to explain to potential clients how a realty company could help add value to their business.

“A decade ago, property was a dead asset in the balance sheet. Today, it is dynamite. Companies are aware about its importance and want to make it a part of their overall development strategy," says Verma, explaining why realty is now a favoured career option for many B-school graduates. 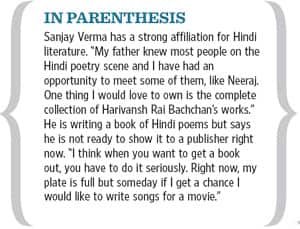 While chief financial officers (CFOs) have got more involved in how real estate can benefit a company 20 years down the line and want to have a real estate strategy in place, getting accurate information is not easy in India. “It is still a challenge to find out who is building what and what is the true progress of the space. There are no secondary sources tracking the market to give an accurate picture and not all developers share the absolute truth. The inefficiency in the system is a challenge, bureaucracy frustrates people and infrastructure still remains a bottleneck. In Singapore or Hong Kong, a real estate company can get killed if they don’t plan keeping all these aspects in mind."

The big India question for international clients who want to set up offices here continues to be about infrastructure. “The sad story is, although it has changed significantly, the administration is unable to provide data. When you get the data, it looks too good to be true. The implementation and execution of projects is always a big question mark. But I am a glass half-full kinda guy, and still think that the India attractiveness has not taken much of a beating," he says.

At present, Verma says, he has set five main tasks for himself in line with Cushman & Wakefield’s five-year growth strategy. “We need to continue to grow China and India irrespective of the downturn; strengthen Singapore and Hong Kong since they are the nerve centres of Asia; Australia, where we entered just three years ago, is a weak spot and it has to grow. We have to identify new emerging markets and finally expand service line bases such as improving capital markets platforms."

Alongside this, he is working on keeping alive his dream of retiring at 50, and trying to finish writing a book of Hindi poems.