It might seem presumptuous to judge a country by your experiences as you land for the first time at the airport. But sometimes, airports are splendid barometers of culture. Heathrow, for instance, immediately has you thinking: “What atrocious advertising! Surely, this is the kind of nation that would give rise to Monty Python..."

Zurich’s airport, on the other hand, is all straight lines, simple signage, orderly queues, meticulously timed shuttles, pressed uniforms and insurance advertisements. The message is simple: “Welcome to Switzerland. We have banks. We are very clean. And our very clean trains run on time."

So sterile and generic is the airport that at one point it felt exactly like Dubai airport in the minimal pre-Burj 1990s. But only with Nordic white people instead of Malabari muscle.

But don’t let that fool you. Switzerland is rightly held in high esteem by tourists of all races, colours and packages. It is the sort of country where you could, if you had the stamina, photograph everything in sight. Even the policemen.

Having had our passports stamped by two splendid samples of the Zurich constabulary, my colleague and I ran to the railway station across the road. The two of us were on a hectic business trip that would have us visiting Basel and Geneva, with our base in Zurich.

Thanks to a shortage of rooms, a bus load of Singapore Airlines cabin crew, and an unrelenting Turkish man at the front desk, we suddenly had 4 hours to roam around the city before we would be allowed to check in.

Off we went on an inspection of one of Zurich’s premier museums, the Kunsthaus. Literally, “House of Art". The word kunst, not to be used without some practice, is something of a hold-all German prefix for paintings, sculptures and such art forms. So you find kunsthauses and kunsthalles all over German-speaking Europe. 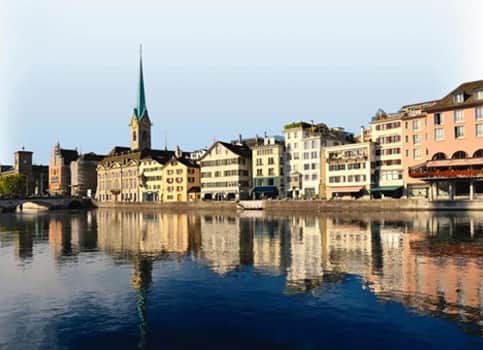 The one in Zurich is easy enough to find. There is a Kunsthaus stop on the tram network. Pop out of the tram and one sees a stately, if boring and bank-like, building. Inside, however, is the most delightful art museum, with a compact collection that spans centuries. From works by old masters, such as Van Dyke and Rubens, to the sculptures of Cy Twombly that belong to the “What the..." abstract genre.

It is a rich, busy and varied collection, with something for every kind of art lover. One floor alone of the museum had works by Warhol, Lichtenstein, Giacometti, Rothko and Pollock crammed into a corner. There is nothing to not like about Zurich’s Kunsthaus, except for the very poor collection of fridge magnets in the gift shop.

After an hour and a half of walking around I suddenly noticed something very strange. “Hey RS," I asked my colleague, “where is all the security? I don’t think there is anyone on this whole floor..."

“Oh the Swiss are very trusting," RS said with the wisdom of someone who has travelled many times to Switzerland on work. “They expect you to follow the rules here."

The rest of my trip I couldn’t get this out of my head. Trams had no ticket checkers. Entire 2,000 sq. ft shops had one aged Fräulein minding the counter. In department stores such as the popular Globus chain, you could wander through acres of merchandise without a security guard ever peeking from behind pillars.

This trust reached its peak at Sternen Grill (details follow), where they let you pick up crusty buns from an unsupervised box kept on the counter. They trust you to pick exactly as many as your bill allows. But they don’t check. You could spend all day walking past that box picking up buns and no one would notice.

By contrast, I am not allowed into the kitchen by myself at home.

RS and I spent that night in the hotel room debating this bewildering tendency.

Much is made in local promotional material of the fact that Zurich has overcome its staid reputation for being a banker’s den. And has now become something of a regional party town. But these are not luxuries meant for the per diem-ed. Instead we focused on experiencing Zurich through its eateries. After all, a man has to eat. Even the guys in accounts understand that.

A quick hop from the Bellevue tram station, Vorderer Sternen is a combination of restaurant, bar and food stall. The food stall, called Sternen Grill, serves up its signature bratwurst with a hard crusty bun (CHF6.50, or around Rs270), called Gold Burli, and a little cup of fiery mustard.

The first bite into that veal sausage, with its abundant meaty insides and crisp but not un-pliant casing, is a moment of epiphany. The bread, on and in the other hand, is crunchy on the outside but soft inside. The kind of loaf that hurts the corners of your mouth. But satisfies. The mustard was so good, and it is good everywhere in Switzerland, that I bought back a large tube of local Thomy mustard to Delhi.

Nati the waitress handed me a menu in English and I ordered a Zurich speciality: Kalbsgeschnetzeltes nach Zürcher Art.

Yes, you order a portion by pointing at it in the menu.

In plain English that would be: sliced veal Zurich style (CHF33.50).

The sliced strips of veal are pan-fried and then doused in a creamy white wine sauce with mushrooms.

While I waited, I sipped on beer and looked around. There were noisy, bald, beer-drinking frat-men. Tourists from Japan. And a near-romantic local couple who were sharing a large table with some young college boys (table-sharing is quite usual in Switzerland. As I would soon learn at Hiltl).

On the walls around were large etchings of fearsome Swiss medieval badasses in armour. I didn’t linger on them much till I realized one prominent part of their armour. A huge, er, cod piece. They were the size of little buckets (enter bratwurst joke here).

Thankfully Nati soon came with my little bucketful of veal and massive roesti.

The food was very good. The service was superb. And the ambience was spectacular. Do not miss Zeughauskeller when you visit Zurich, and don’t forget to look at the sign at the door which prohibits smoking there because of the “live grenades" stored nearby (imagine if these guys weren’t neutral when it came to wars).

Now before you throw up your Iyer/Iyengar/Jain vegetarian hands and curse the veal, beer and potatoes... hold on. Let me introduce Hiltl, considered one of the best vegetarian restaurants not just in Zurich or Switzerland, but in all of Europe. Initially we ignored such claims, assuming Hiltl to be one of those tourist traps at best. And new-age organic, raw food type places at worst. But one night, RS, an uncompromising “One-spaghetti-carbonara-but-no-egg-no-fish-no-shrimp-no-meat-please" veggie, had enough of eating bun and mustard left over from my bratwursts.

Hiltl was a revelation. First, there is the concept of paying for your food by weight. After each trip to the buffet you weighed your plate, printed out a little receipt and kept it with you. At the end of the meal a trusting waiter totted up all the receipts.

Second was the food itself. An utterly respectable spread of hot and cold vegetarian food, with everything from a splendid cheese quiche to green peas samosas and paneer (cottage cheese) masala.

Third, we were squeezed into a huge oblong table along with at least four other groups. There was some initial awkwardness and elbow jousting. Till the quiche and paneer happened.

Then just as we got up to stagger back to the hotel, the waiter, till then a silent apparition, suddenly asked us if we were Indians. We nodded. “Hi. My name is Virat. I am from Rajasthan. You guys should come for Bollywood Night at Sugar Lounge on Thursday."

Virat handed out invitation cards for the event. On one side it had pictures of a man in mammoth sunglasses, spiked hair, looking trendy and far into the distance.

Virat then told us about Hiltl, about how Morarji Desai once ate there—“There are photos in the office"—and how it was something of a meeting place for Indian tourists. He assured us that his Bollywood Night was a not-for-profit social initiative.

“No no. No money for that. It because there are very few Indians in Zurich. Mostly computer people. Come for one or two years. There is no community spirit. I am the president of the Indian community in Zurich. I am trying to get them to socialize."

Virat then gave us a quick list of things to do and places to see in Zurich. Which we enthusiastically noted down. And then never referred to again.

You see, we had meetings.

My parting dietary engagement with Zurich was at the Sprüngli outlet in the departures duty-free. Sprüngli is a chain of bakeries and confectioners with outlets all over the country. They are world famous for their Luxemburgerli—mind-blowing-light-as-air macaroons, and fresh truffles.

How fresh? There was a lady from Sprüngli actually making truffles at the airport. She let me sample one in dark chocolate. And then one in milk chocolate.

“They are very good yes," she said matter-of-factly. “They are the best."

“Uhuh" I said as tears of joy welled up in my eyes.