A show for history buffs

“The title Dakshinapatha refers to the trade route between Northern and Southern India. We used the artistic and creative license to describe it as a journey through the South," says Mumbai-based Angira Arya, curator of Dakshinapatha: A Souther Odyssey. The exhibition, conceptualized to mark the third anniversary of Gallery Veda in Chennai, is a collection of illustrations of South India from the late 1700s to mid-1800s.

According to Arya, these images of Southern India, scarcely seen outside museums, rare edition catalogues and private collections are, “a poignant and heart-warming treasury of images, at once evocative and reflective of the rich culture and traditions of this wonderful part of our nation."

A 110x28 inch stipple engraving of Robert Ker Porter’s The Storming of Seringapatnam covers a wall of the gallery. The imagery is vivid—you can almost smell the blood, gore, and smoke of frenzied combat, sense the despair of Tipu’s men as they crumble despite stiff resistance, hear the victory cries of the redcoats over the boom of the muskets and rifles and the slash of the bayonets and feel the dry, arid heat of that summer day when the Cauvery was at its lowest level making it easy for the infantry to wade across stealthily and breach the walls of the fort beyond.

The artist, a scene-painter at the Lyceum Theatre in London was only 23 when he created the original oil-painting in just six weeks. He had never visited India, so the 21-foot high, 120-foot long panoramic representation of the incident was recreated from hearsay and imagination a year after that great battle.

“That painting was unfortunately burnt in a fire," says Preeti Garg of Gallery Veda, but the stipple engraving on display at the gallery, offers a fair view of the “fire, energy, intelligence and animation" of the painting, as described famously by Ker Porter’s sister, Jane.

There are other works in this collection of paintings, illustrations, etchings, aquatints and lithographs chronicling the south of India, that tell of the story of the brave but ill-fated Tiger of Mysore, Tipu Sultan. A 22x29 inch mezzotint of another, smaller painting by the same artist (c 1800), titled Finding of the Body of Tipoo Sultan captures his death while a stipple engraving of Henry Singleton’s Handing over Sons of Tipoo Sultan (c:1800) shows the two young princes of Mysore in white drapery, walking, with their heads bowed, towards a exultant Sir David Baird.

“The Battles of Seringapatnam were very important in towards establishing British control over Southern India," says Arya. “Both Hyder Ali and Tipu Sultan refused to accept any treaty with the British and defeated them in the first two battles that were waged against them."

In the third, however, two of Tipu Sultan’s sons were taken hostage and the Seringapatnam fort was finally breached.

The English East India Company’s unremarkable origin as traders, who had sought to monopolize trade from the Indian coastline, led to a series of annexations and treaties over time—by 1858, most of the Indian sub-continent was under the British crown. 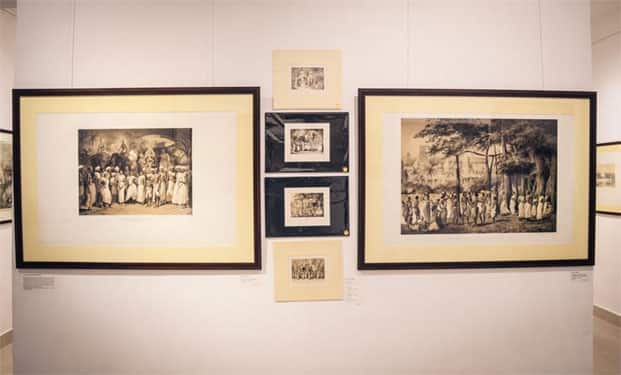 The lands of the Carnatic region lying between the Eastern Ghats and Coramandel Coast comprising present-day Tamil Nadu and parts of Kerala, Karnataka and Andhra Pradesh, which were under Mohammed Ali, the late Nawab of Arcot, were some of the first major British possessions in India, says Sujatha Shankar, the vice chairman of Indian Institute of Architects, Chennai Centre and Convener of the Indian National Trust for Art and Cultural Heritage, Chennai.

The late Nawab was also the first Indian ruler to patronize British artists, one of whom was Colonel Francis Swain Ward, who painted portraits of the Nawab’s family and scenes from Madras city. The Chepauk Palace, the official residence of the Nawab is immortalized in Ward’s 14x17.5 inch aquatint titled The Palace of the Late Nabob of Arcot. According to Shankar, “The Chepauk Palace is of great historical significance because of two reasons. It was the first building in the country to be constructed in the Indo-Saracenic style of architecture. Also, the Nawab was not able to repay the debts he had incurred while constructing the building so he had to cede land to the British."

“Most of these artists were surveyors but in their pursuit to find ideal locations for the colonists, they left us with amazing images which are the only remaining images of bygone days," says Arya, adding that since photography hadn’t yet arrived, these images are the only visual records of those times. He points to Thomas and William Daniell who were among the earliest artists to cover the Indian sub-continent and also brought printmaking techniques into the country. The uncle-nephew duo of professional painters arrived in Calcutta in 1786. Thomas published his first series of engravings titled The Twelve Views of Calcutta, the first of its kind in India. In 1792, they spent eight months exploring southern India. A selection of the sketches they made during their travels was converted into aquatints and published in a set of illustrated volumes titled Oriental Scenery.

Aquatints of the Daniells’ work showcase an antique reservoir in Kolar (spelt Colar) carved in typical Vijayanagara style, with dancing girls and elephants; the Tiruchirapalli (spelt Tritchinopoly) Rock Fort, a speck on the ancient rock on which it stands, grazing the sky; Fort St George that houses the Tamil Nadu legislature and secretariat today, with the flag of the Empire flying over it. Works by Thomas Daniell have been classified as National Art Treasures by the Government of India.

Then there is the work of Etienne Rodriguez, an author and illustrator who delved deep into Hinduism. Very little is known of the man itself but his work is exhaustive: an illustrated book of 500 gods and goddesses. Jewel-colored lithographs from this book cover an entire wall of the gallery.

“The portrayal and depiction of life of the period, whether is monochrome or in vivid colors, of forts and ruins, temples and streetscapes, people and landscapes, flora and fauna, occupations and customs are both a testimony to the times as well as the artistic training and skills of the travelling British artists who toured extensively across the vast canvas of South India," says Shankar.