And getting there isn’t all that much easier than it was when it was first discovered—in that amusing way in which hill stations are “discovered"—in May 1850.

“In the month of May, 1850, Mr Hugh Malet, of the Bombay Civil Service, while halting at the Chauk Bungalow on his way from Poona to Tanna, strolled one evening, with his gun in his hand, half-way up the hill; and, having satisfied himself that it was worthy of further exploration, returned next day, under the guidance of the Patel of Soondeewarra, with a determination to reach the summit."

Thus begins a detailed and slightly confusing account of the establishment of Matheran in the book Matheran Hill: Its People, Plants and Animals written by J.Y. Smith, a Bombay doctor, and published by a city publishing house in 1881 (the book is freely available online to read, and is well worth the effort). 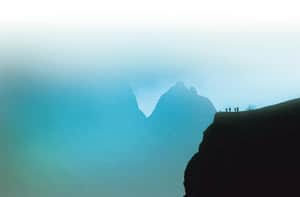 Bird’s-eye view: The monsoon comes in over Louisa Point. Photo by Joydip Mitra.

By rail the scenery is spectacular. Matheran is a tiny smudge of a flat ridge amid an undulating landscape of superb crests and troughs. Smith puts it nicely in his book when he compares the local topography with a Jerusalem artichoke, or a piece of knobbly root ginger, with a thin flat portion sliced off to show Matheran.

The train winds its way through this landscape, skirting several steep drops on its journey up. “Ooooooooooh," say the children on the train. After heavy monsoon rains washed away almost 70% of the tracks in 2005, it took 18 months to repair the tracks and reopen it for service. The shutdown was a blessing in disguise: The tracks, embankments and culverts look smarter than on any of the other four or five operating hill railway lines in the country.

Walking up to Matheran is a slightly more Victorian ordeal. Matheran is not only the smallest hill station; it is also, perhaps, the warmest. Temperatures rarely drop below 13 degrees Celsius. So if you’ve been softened physically by the high life in Mumbai or Pune, the climb, drenched in the mottled sunshine that passes through the trees, can wind you up. 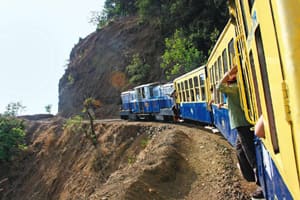 Journey up: By toy train, the scenery is spectacular. Photo by Arne Hückelheim/Wikimedia Commons.

It gets into everything. Your shoes, clothes, mobile phones, bags, camera...everything. No amount of shaking, dusting, washing or intimidating with choicest Mumbai abuse will dislodge it. Matheran’s red dust will take your leave eventually, but only on its own terms. Suddenly, one day, you will notice that your Reeboks are no longer glowering.

But by then you will want to go to Matheran again.

Up on the hill station life is lived, hotels are run, commerce takes place, and pool is played largely along a straight line that stretches from a little north of the railway station and then winds all the way down to Charlotte Lake. There are many walks and paths that branch away from this central spine, but everything “happens" here on this stretch that any reasonably fit person could run from end to end in minutes.

And yet it draws thousands of people each year. In 2007, one estimate put it at a thousand people per day during peak holiday season.

Now one would assume that people come here to do the exact opposite of what they would in Mumbai or Pune, that is, nothing.

But, in fact, something magical happens to Indian city folk when you expose them to hill stations. They morph into super-eager, ridiculous-risk-taking, ultra-consuming, straw-hat-wearing “enthu cutlets". Suddenly they find the enthusiasm to see each and every one of Matheran’s 38 look-out points. In between they discover the cast-iron stomachs required to consume hill-station butter chicken and hill-station paneer butter masala.

Men, women, husbands and wives who are otherwise prepared to kill for a 3% discount on onions in Andheri, swoop on ice cream, biscuits, soft drinks and dubious souvenirs. It is not uncommon to see street vendors in Matheran, on top of the Sahyadri range of mountains, sell table pieces made of coral.

If you’re staying in Matheran for no longer than a weekend, then there are just about enough “enthu cutlet" things to do. None of these things—except the tonnes of red soil encroaching on your person—are uniquely Matheran. A Cadbury Dairy Milk in Matheran is the same as the one you get in Dadar.

But the way to truly enjoy this piece of hilly heaven is to sit by Charlotte Lake, or find your favourite viewing point—Panorama, Lord’s or maybe Louisa Point—and relax with some music or a good book. Matheran is not, Smith says, an exceptional hill station compared with some of the other ones in India:

“Matheran has no great pretensions, however, as a sanitarium in the highest sense, and to trust to its healing influences in severe and complex ailments is mere loss of time. For these it is necessary to go further; but for the malaise and feebleness brought on by a Bombay monsoon, and for all complaints, mental or bodily, that can be relieved by exhilarating exercise amid charming scenery, those who know it well must speak of it with rapturous admiration."