Portrait of an endangered sport

Portrait of an endangered sport

Once or twice every two years, Manvendra Patwal wields a cricket bat for the national side, putting away the ball that comes rattling towards him. Now, Patwal—who works as a personal assistant in the Union ministry of social justice and empowerment—has emerged as one of the protagonists of It’s Cricket, No?, a documentary by Sudhir Aggarwal and Gregory French on the Indian blind cricket team. This documentary premiered at the Persistence Resistance festival, organized by the non-profit Magic Lantern Foundation, on Tuesday in Delhi. 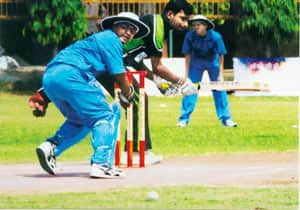 Aggarwal, who worked on the documentary idea suggested by French, used digital SLR cameras to reproduce the point of view of the partially sighted and blind players. These shots constitute the backbone of the film, lending authenticity and stability whenever the narrative—held together loosely by vignettes plucked from players’ lives—threatens to flounder.

Aggarwal even visited the National Institute for the Visually Handicapped (NIVH) in Dehradun at Patwal’s suggestion: “Your film would be incomplete without a visit, for it all began there." Just as it would have been incomplete without inputs from George Abraham, who chaired the World Blind Cricket Council (WBCC) formed in 1996 till he retired in 2008.

It was around 1988 that Abraham, himself visually impaired since childhood after a bout of meningitis, came across an enterprising bunch of children at NIVH determined to play the game they loved. They had bored holes into plastic balls and filled them with ball bearings before proceeding to play. Abraham helped develop a more evolved form of the same ball, with a seam, at NIVH, and determined to infuse a degree of standardization into a game that had been played in different ways across the world since the 1920s.

A few regional tournaments later, Abraham played a big role in setting up the WBCC. He was already chairperson of the Association for Cricket for the Blind in India (ACBI), established earlier. The plan was to hold a World Cup once every four years, beginning 1998, says Abraham.

Two World Cups followed the inaugural edition in New Delhi, with each team comprising players from three categories: B1, four completely blind players; B2, three partially blind players; and B3, four partially sighted players. Since the game rested on acoustic signals, the 40-over matches were played on a pitch divided midway by a white line before which the ball needed to take its first bounce, giving the batsman enough time. The bowler would shout before every delivery and the game would thereafter be like any cricketing contest. South Africa won the first Cup, Pakistan the next two.

Patwal captained India in the 2006 World Cup where they finished second, losing to Pakistan. “The whole team decided to practise even harder for the next edition," he adds.

His dream of winning seems distant now. The Cup scheduled for this year is nowhere on the horizon. Abraham has hung up his boots after years of wrestling with governmental and corporate ignorance, passing the mantle to Samarthanam Trust, a Bangalore-based NGO which funded the India-England series that features in the film. The Board of Control for Cricket in India (BCCI), Abraham says, doesn’t recognize this form of the game.

“The BCCI doesn’t realize that by supporting blind cricket they can make profits and improve their image by making it part of their CSR (corporate social responsibility) activities," he says.