The bored housewife is part of cinema lore. Sam Mendes’ interpretation of Richard Yates’ April Wheeler in Revolutionary Road and Satyajit Ray’s Charulata, a memorable Tagore woman in the eponymous film, are only two stellar examples. Fiction has found powerful fodder in the banal life of a woman confined to home by choice—in her thwarted desires, mostly, contextualized in the age she lives in. 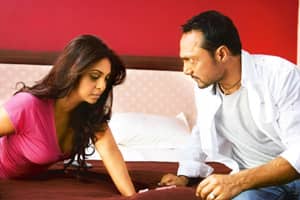 Kucch Luv Jaisaa is a glaringly shoddy script, with situations thrown in, just to forcibly propel the basic idea. The meeting between Madhu and the mobster Raghav (Rahul Bose), and their sudden connection, has absolutely no explanation. The only explanation is perhaps that the writer, while imagining the outline of Madhu’s character, did not etch it to justify her whimsical transformation. Towards the end of the film, when she realizes she was just an easy way for the mobster to escape getting caught, she says to herself, “Oh God, I am such a fool!" And that pretty much sums up the character that Shukla wrote.

Madhu’s corporate husband (Sumeet Raghvan), who swings his golf club in his office, waits impatiently to wish his wife on her birthday. Madhu is upset and angry at her husband for having forgotten her birthday in the morning. But soon, after a phone conversation with her father (Om Puri), she decides to take charge and get her mojo back. Her first destination is a shopping mall, then the beauty parlour—we then meet a confident Madhu. She buys a car and zooms away to the unknown. She mistakes Raghav for a detective and requests him to let her help with his case for the day. The two of them follow a man who, Madhu presumes, is cheating on his wife and planning to kill her. Throughout their meandering around Mumbai, including a long walk to the Haji Ali mosque in her new pair of stilettos, Madhu rants against her uncaring, inattentive husbands, while Raghav, an unusually sulky and calm criminal, listens.

This is Shah’s first lead role. The actor’s ability to understand characters is known. In movies such as Satya and Monsoon Wedding, Shah performed her roles with ease and conviction. But here, the stilted characterization—and its sheer unbelievability—makes her performance seem silly. She is noticeably out of sorts and contrived in most scenes, often expressing and gesticulating too much. It’s a pity an actor of her calibre is not in the hands of a capable writer and director.

Bose is terribly miscast as a tapori gangster who fakes passports and is in love with a wannabe starlet (Neetu Chandra), who helps the police nab him to get cheap publicity. Perhaps the very fact that he has few dialogues in the film saves the actor embarrassment because it is obvious that Bose has neither the persona nor the understanding of a cheap criminal. As a result, his performance is painfully laboured and awkward.

There’s little in the performances of Kucch Luv Jaisaa that redeems its underwritten, thoughtless and immature writing. Madhu is not the bored housewife who can extract your sympathy or anger—perhaps only a few guffaws at her unattractive dumbness. 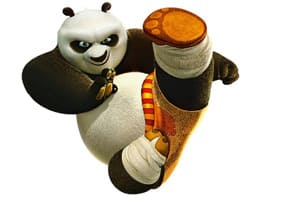 Po the Panda, the tigress, monkey, viper, crane and mantis are back together in the sequel of the acclaimed and popular Kung Fu Panda. This time they face a more dangerous enemy who, by developing weapons of mass destruction, threatens to make them extinct. Po is as energetic, funny and adorable as in the first film. Kung Fu Panda II is an enjoyable 3D trip, visually as well as in the way the story moves towards its climax.