Apple iOS 10.3: New file system is all about improved security

The latest update for the iPhone and iPad will switch the internal storage automatically to a new filesystem, which promises better optimization, performance and security

Apple is now rolling out the iOS 10.3 update for iPhone, iPad and the iPod Touch. The latest operating system (OS) brings a bunch of new features as well as performance enhancements, and would most likely be the last big iOS 10 update. There is the redesigned iCloud option, which now shows your Apple ID information as well as the storage details in one place. The CarPlay experience has also been improved, with interface redesigns and additional information screens in different apps that make control easier. Virtual assistant Siri can now pull out cricket scores and stats from International Cricket Council (ICC) tournaments as well as annual the Indian Premier League (IPL) extravaganza. Apple has also added a notification in case you open an app that runs the older 32-bit architecture, suggesting that this app will not work with future versions of iOS—it is believed that the iOS 11 software will completely drop support for 32-bit apps, and developers have been getting warnings from Apple about this, as far back as 2015. There is also a new Podcasts widget, updates to SiriKit, 3D Touch actions for Maps and widened support for HomeKit. However, we haven’t even talked about the most critical bit yet—security. 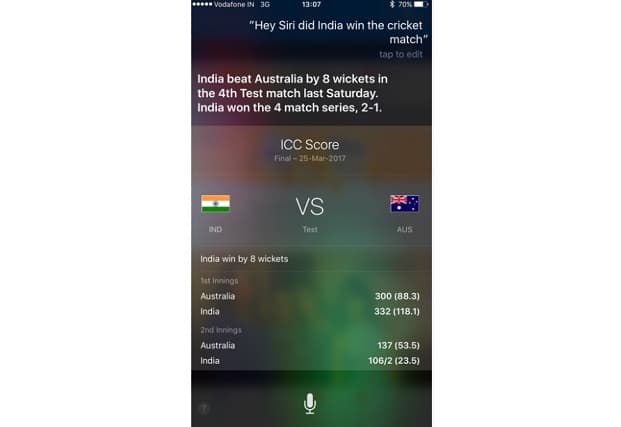 With iOS 10.3, Apple is finally switching to a new file format known as Apple File System (APFS). This replaces the HFS+ file system that has been in use since 1998, on computers and subsequently phones (it was an evolution of the HFS standard that was introduced in 1985).

When you install iOS 10.3 on your iPhone or iPad, for example, it will automatically convert the storage filesystem from HFS+ to APFS. The advantages of APFS include optimized storage (which means critical space may get freed up on the same device) and faster read and write speeds (which will improve overall performance) on solid state and flash drives. However, the biggest change is the security aspect. APFS provides full disk encryption as well as encryption for individual files and folders—with the option of no encryption, single-key encryption and multi-key encryption.

APFS will not change how you see your documents, folders and files. Visually, and structurally, things will remain the same as they were earlier, since all the changes are happening behind the scenes.

The APFS system has been designed to run on iOS, macOS, tvOS and WatchOS, and we should see specific updates for the other three platforms sometime in the near future.

Apple documentation suggests that no data will be deleted or lost during this conversion process—however, just to be on the safe side, we would recommend a complete backup of the iPhone or iPad, before installing the update.