Like many others in Kolkata, ad man Ram Ray sees the Eden Gardens stadium as a metaphor for the city. A packed stadium on a big match day, appreciating every cricketing moment played out on the lush expanse, complements the 65-year-old’s summation of Kolkata itself—big, bright, discerning and reputable. To the chairman of advertising agency Response India and founder-member of non-profit society Concern for Calcutta, it was as if the character of the city was at stake and crumbling fast.

Over the next few days, Ray remembers, Concern for Calcutta placed half-page advertisements in newspapers with a single word, “Sorry", printed in 400-point size across the space. The ad, which was also published in a leading Sri Lankan daily, was signed “Calcutta". “The city was good at watching the game, if not for producing many cricketers. That incident was a jolt. It had to be an apology on behalf of the city," Ray says.

Fifteen years on, Eden Gardens is dogged by controversy even before a batsman can take guard. The International Cricket Council (ICC) has ruled out an unfit Eden as the venue of the India-England World Cup match on 27 February, further denting the reputation of the Cricket Association of Bengal (CAB).

For now, the ground seems to be stuck in a wedge between its illustrious past and the demands of the future. Eden hosted the first World Cup final in 1987 outside of Lord’s in London; it witnessed the historic V.V.S. Laxman- and Rahul Dravid-steered Test victory over Australia in 2000-01, and post-apartheid South Africa’s first international match in 1991. 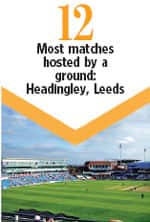 All of these, says author and cricket historian Boria Majumdar, would have turned the 1864-established stadium, which saw its first Test being played in 1934, into one of the best sporting arenas in the world. ESPN Cricinfo notes that despite the current fiasco, Eden Gardens remains, along with the Melbourne Cricket Ground (MCG), cricket’s answer to the Colosseum.

If the ICC ground inspectors allow Eden its March World Cup matches (South Africa vs Ireland, The Netherlands vs Ireland and Kenya vs Zimbabwe), the world may still be able to see the change.

CAB has often been criticized for being indifferent to spectator comfort at Eden. The seating capacity was 84,000, but it was common knowledge that tickets were usually oversold. CAB joint secretary Biswarup Dey says the renovated stadium will seat approximately 63,000.

In fact, overcrowding was said to be the reason for violence during the India vs West Indies Test match during the 1966-67 tour, when valid ticket holders spilled on to the ground and disrupted the match. It was one of the many occasions when Eden erupted in protest against a perceived wrong. Another notable example was a 1999 Test match when Pakistani pacer Shoaib Akhtar collided with Indian batsman Sachin Tendulkar, leading to the latter’s eventual run-out. The crowd sensed mischief on Akhtar’s part. Riots ensued, the stadium was emptied forcibly and the match continued before vacant stands. On another occasion, Indian captain Sunil Gavaskar was targeted with orange peels for dropping the crowd’s favourite, Kapil Dev, from the Indian side against England in 1984. Bhimani points to incidents of crowd violence in Port of Spain, Guyana (both in the West Indies), Sydney (Australia), Karachi (Pakistan) and Mumbai, among other venues. “One has to look at the big picture, where a ground should be understood through its outfield, pitch, its history, cricket-understanding crowd and picturesque qualities. For me, Eden is still probably the world’s best cricket stadium," he says.

“The decibels will go down surely. But overall, the environment should remain the same," predicts Deep Dasgupta, a Kolkata-based wicketkeeper and batsman who made his Test and One Day International debut in 2001. Having played much of his cricket in Delhi, Dasgupta remembers the day he first walked into Eden Gardens as a player in 1995. “The stadium has this tremendous aura, backed by history. You are overwhelmed by the sheer size of everything. It was like walking into a temple."

It can be reasonably said that cricket will miss Eden as much as Eden will miss the game.

Biren Mitra, former CAB vice-president and an Eden old-timer, goes back to the days when wooden galleries used to be hired during big matches and makeshift huts for spectators used to flank the ground. The first game the 77-year-old remembers watching at Eden was the India-West Indies Test in 1948, and he has lived through Eden’s many milestones—the construction of permanent concrete galleries, the installation of the giant, manually operated backlit scoreboard, followed by the electronic scoreboard, the advent of live television coverage, face painting, the demands of influential businessmen and chest-thumping jingoism. Yet one aspect of Eden Gardens remains endearingly unchanged for him: “Kolkata is a volatile city and it is manifested in the stadium. While the emotional crowd can occasionally go berserk, they have really appreciated good cricket all along. Like the game, Eden Gardens too is a little unpredictable."

Even as he speaks, work is on to get the stadium match-ready before the next round of ICC inspection. Amid the din, dust and controversies, the manually operated scoreboard, operated from inside a wooden box near the boundary line, stands out like a cello in a concert of loud electronic music. The late-afternoon river breeze—often the reason behind the swinging ball at Eden—keeps the score wheels inside the wooden box moving. In this vast theatre of change, the manual scoreboard is small and insignificant. It has survived the rise and fall of Eden.