In the north-west corner of Australia is the world's largest collection of petroglyphs. It survived the Ice Age; can it survive the mining age?

It’s not easy to get your eyes in at first; it takes some time to get used to the incredibly strong rays of the Southern Hemisphere sun. Then, quite unexpectedly, amid the mountainous pile of decrepit, sun-battered rocks around you, something catches the eye—a faint outline engraved against the red rock surface. You move closer, eyes and brows furrowed, and, suddenly, kangaroos and mythical beasts, complex geometric patterns and primitive warriors with boomerangs leap out of their ancient shadows.

There’s nothing but a rusted signboard to announce this hidden treasure, but this tiny, inconspicuous valley in the remote north-west corner of Australia contains, arguably, the largest known collection of petroglyphs or rock engravings.

Driving along the Pilbara coast, which hugs the Indian Ocean, I couldn’t help but marvel at how strikingly dissimilar this landscape is to the flash-flooded, boggy Northern Territory I had left behind. The green had withered, the trees had turned to thorny shrubs, whole mountains had been flattened. For as far as the eye could see, it was all deep red beneath and clear azure above. What secrets must this ancient land hold in its impenetrable clasp, what memories must be imprinted over its rugged heart. The first Australians—the Aborigines—called it the “soft earth", their prayers tied to its benevolent core.

In modern history, though, this spectacular landscape is tied to another kind of prayer—mining. In the town of Karratha, you can feel it pulsating with iron ore and offshore gas industries. A small town made big by the earth’s riches. In every sense, the Pilbara is the remotest region in Australia—stretching over 502,000 sq. km of wilderness, its population just over 40,000. In the past 8 hours and nearly 850km, I have counted 11 road-trains, one abandoned roadhouse and numerous kangaroo road kills. Around me lies the great Australian outback in its peak-summer glory, which means the bushfire season is upon us. The Great Northern Highway under my wheels is a thin tar ribbon that cleaves through this near-Martian landscape in an indomitable straight line. Never to turn, never to bend; it charges through these arid mountains and searing deserts like a doughty rhino.

In local Aborigine-speak, Karratha means the “Good Country", and what a good country it’s proved to be. The lawns outside trendy villas are lush and manicured. Less than 5 minutes after I have driven into town, I spot about half a dozen convertible Porsches. There is Dom Pérignon and tender scallops on restaurant menus, and, just around the corner from a stylish Pilates studio, a spacious, well-stocked Woolworths too. I am suddenly embarrassed by my grubby camper van and its silly spray-painted design.

A short drive takes me across the salt pans to the Dampier archipelago. The 42 arid islands of the archipelago weren’t always islands. They were volcanic mountain corks spread about 100km inland. To the first Australians, who made this land their habitat nearly 40,000 years ago, it must have been an impressive sight—a verdant mountain range offering plenty of tree-shaded areas and pools of water. According to local belief, this was the “dreamtime".

Today, in the same valley, heaps of red rocks lie exposed, bereft of tree cover. They look like untidy piles of mining debris, but are in fact entirely natural. Scattered around them are over a million petroglyphs; over 10,000 of them in the Deep Gorge, where we stop to examine them. I am lucky to have Clinton, a local Aboriginal conservationist, accompany me. He has a relaxed air about him and seems to be a natural at navigating this rocky terrain. 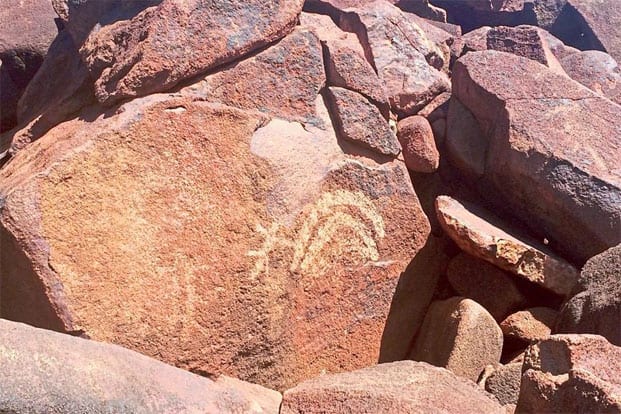 After a short ascent through rocks and kangaroo droppings, Clinton points to the very first engraving of the day and asks if I can recognize it. A pair of boomerangs, I whisper. Can I touch it? I gently trace my fingers along its rough outline. The movement of the line is smooth and the scraped part of the rock cooler to the touch. Clutching these two boomerangs is a stick figure, presumably a warrior. “How old are these?" I ask, unable to take my eyes off them. “Oh, these are relatively fresh," he says. “By fresh, I mean made in the past 5,000-10,000 years."

He starts walking. I try to keep up, but I am distracted. It’s like acquiring special vision. Suddenly, I am intensely alert, examining every single rock around me. Soon, I find coiled reptiles and kangaroo tails, robust beaks and emu footprints. I shout out my discoveries to Clinton, who is walking a few steps ahead of me. In turn, he tells me not to get off the main walking trail. It’s an order difficult to follow. Some of the engravings have faded, some are visible only if the sun is at a certain angle and some look like they were carved yesterday.

No one knows when humans started etching on these rocks, but as far as archaeologists can tell, this site has been inhabited continuously for 35,000-40,000 years.

At the head of the gorge, near a dried-up waterhole, we encounter a pack of curious kangaroos that refuses to make way. I flinch and linger. Clinton continues without dropping speed. Wait, what if they’re rabid? Clinton lets out a hearty laugh. I have no choice but to follow him. The kangaroos skip away.

As my eyes follow them, I notice something high up on the rock. It looks like an enigmatic emoticon, with carved out eyes and mouth. There are more etchings around it: Some depict dismembered heads with owl-like eyes; some illustrate map-like geometric patterns. These are some of the oldest petroglyphs in the valley. Scientists are not quite sure about their meaning, but, to the Aboriginal mind, there’s no ambiguity about it. To this day, these images remain an important source of day-to-day survival for them, giving them information such as the location of water, food, places of worship, campsites or significant landscape features. There are songs about these images that link communities across vast swathes of this continent.

What’s more, these songlines offer fascinating insights into how those early humans adapted to their changing world. The end of the last Ice Age saw sea levels rise, which turned inland hills into an archipelago. Images of boomerangs and kangaroos 20,000 years ago are accompanied by the images of harpoons and a whole host of sea creatures from the last 10,000 years. At the foot of a hill, I stop to admire a kangaroo carving, with intricate etching of two sea turtles over it. It’s surely one of the “fresh" petroglyphs. I look around for Clinton to verify.

But he has reached the hilltop and I have to hurry. I clamber up, out of breath but eager to see what he has found. On a huge rock in front of us is a magnificent etching of an animal frozen mid-jump under the full moon sky. It’s a Thylacine, the Tasmanian tiger, said to have become extinct at the turn of the last Ice Age. 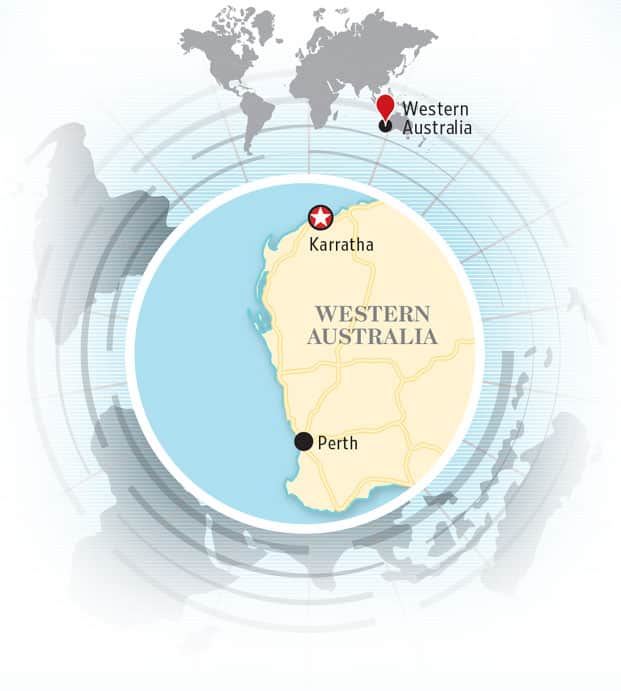 When the first settlers landed here in the 1800s, they declared this continent Terra Nullius, or Nobody’s Land, because they found no sign of cultivation. To early European settlers, a “human being" was defined by the capacity to rise above and improve upon nature. Not submit to it. Till as late as 1967, the Aborigines weren’t considered human and were in fact governed under the Flora and Fauna Act. Many were slaughtered in a series of massacres. Of those who survived, some succumbed to the diseases settlers had brought with them. Others were kidnapped for slave labour, while those who tried to continue with their traditional hunter-gatherer ways were thrown into prisons.

Even though archaeologists and Aboriginal activists had long been demanding limits on industry in proximity to these petroglyphs, it wasn’t until 2007 that approximately 4,900 hectares of this area was declared protected, as the Murujuga National Park. By this time, a substantial number of petroglyphs had been vandalized, stolen or simply bulldozed for mining projects. The site still remains vulnerable to the whims of the “modern" world around it.

Clinton says he is thankful for the recent mining slump, for it could pave the way for business opportunities other than mining, such as tourism. It is an opportunity for people to look at what lies around them rather than beneath them.

“I want the world to love this land the way my people have," he says, plucking a few grape-like leaves from a discoloured bristly shrub growing under the rock. Bushtucker, he says, before passing them on to me. They explode like vinaigrette in my mouth, leaving an addictive tingle. I extend my hand for more. “My people have a saying," he continues, handing me some more of that tangy treat. “If you know your songline, you’ll know your country; and no matter what happens, I know, these rocks will be here always to remind us of our songs." Fly to Perth via Singapore or Bangkok. Karratha has regular domestic air connections from Perth, but a road trip from Perth to Karratha is an immersive Red Country experience. A car can be hired for around A$ 80 (around ₹ 3,860) per day.

Despite its remoteness, it’s quite possible to stay in comparative luxury in Pilbara. Try the Samson Beach Chalets or the Karratha International Hotel.

For a taste of the Aboriginal life and spirit, book the Bushtucker (traditional bush food) Day Tour. Catch mud crabs and cook fresh kangaroo tails in an earth oven, and go searching for native fruits and vegetables. Ngurrangga Tours organizes these expeditions via the Karratha Visitors Centre.