Across the Indian Outback

Across the Indian Outback

After three days across Rajasthan on a Royal Enfield motorcycle, Australian film-maker Baz Luhrmann has good reason to buy into this aphorism: The journey isn’t over till you hit the door. Only half an hour away from his return stop in New Delhi, a man jumped from a moving bus, hit his bike, and sent him sprawling across the highway. Luhrmann now nurses a fractured hand but insists that given the chance, he wouldn’t change a thing about the trip.

This is Luhrmann’s fourth visit to India. The first, 15 years ago, was a revelation of sorts. He fell in love with its sights and sounds, the curious way the country blends its ancient history with the spirit of something nascent. This initial fascination gave way to a research trip for his film Moulin Rouge (2001). So, 10 years ago, Luhrmann came down for what he calls the “Moulin Rouge trip". It resulted in the Bollywood song Chamma Chamma (from China Gate) making its way into the movie.

This time around, Luhrmann is here with fellow Australian artist Vincent Fantauzzo for a charity event for Le Sutra, a recently launched boutique hotel in Mumbai. Of India, the Oscar-nominated film-maker says, “The first couple of days are always overwhelming. But that’s only till the euphoria soaks in."

Apart from movies such as Romeo + Juliet (1996) and more recently Australia (2008), Luhrmann is famous for his 1999 pop single Everybody’s Free (To Wear Sunscreen). Among other things in that ironically didactic song, Luhrmann advises his listeners to “do one thing every day that scares you". It is evident that Luhrmann himself lives by the same dictum: He had never ridden a motorbike before taking up the offer to venture into the Indian Outback. 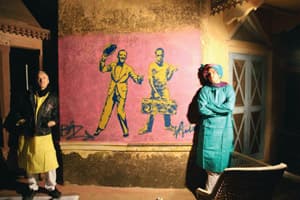 Revved up: Luhrmann (left) and Fantauzzo take a break after painting a mural in Rajasthan. Courtesy Royal Enfield

The trip was partly sponsored by the motorbike manufacturer Royal Enfield, which gifted both Luhrmann and Fantauzzo personalized two-wheelers for the journey. On 27 January, a few days before setting off for Rajasthan, the two painted a 14x5ft public mural on hotel Le Sutra’s facade as part of a project to promote artistic fusion. “Artists can do so much more to bridge the gap," says Luhrmann, referring to the attacks on Indian students in Australia. “Politicians need to follow protocol, there’s a certain way they need to do things, but artists can be spontaneous."

Despite this declaration of purpose, Luhrmann is honest in confessing that the real lure for him was the motorbike trip. When Fantauzzo told Luhrmann about the charity gig, the film-maker was unsure about taking time off from the two films and the theatre production he’s working on. “But then he mentioned the bike tour and it sealed the deal," says Luhrmann, and then, grinning, adds that he hopes he is not coming across as “too fickle".

Presently, Luhrmann has the film rights to the classic American novel, F. Scott Fitzgerald’s The Great Gatsby. Holding up his bandaged hand, he wonders if his experiences in India could distill into a film project in the years to come.