There’s been a tribal invasion in the living spaces of art collectors Lekha and her son Anupam Poddar. At their New Delhi residence, two large vertical panels from Purulia in West Bengal take up one wall. The paintings tell the stories of the gods Manasa Devi and Shiva. They belie a linear concept of time as we know it, bringing different events of a narrative together in one space. In the dining area, there are woven fibre chairs from Chhattisgarh (with snakes fashioned as backrests) and six paintings by Gond artist Jangarh Singh Shyam. The earliest of these were bought in 1988, long before Jangarh became the poster boy of the new wave in Indian tribal art. Most striking of all is the coup in the guest bathroom, where a giant red cow stares down. This 6x4ft canvas, Lekha explains, was the start of her journey into the wild. 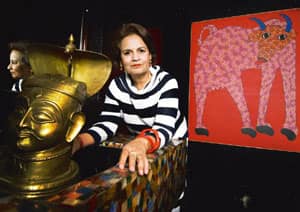 Next week, the Poddars will open the largest ever contemporary tribal art show in India at their non-profit Devi Art Foundation (DAF). The exhibition will comprise works from Lekha’s personal collection as well as works that DAF acquired and commissioned over the last three years for the show. The two-part exhibition, Vernacular, In the Contemporary, which covers 60 artists and over 100 artworks, will have a six-month run. Earlier this year, the Poddars loaned some works for the Other Masters of India: Contemporary Creations of the Adivasis show curated by the prominent art historian and museologist Jyotindra Jain at the Musée du Quai Branly in Paris.

Lekha shows us a few papier mâché masks she purchased at an ongoing exhibition of folk and tribal masks at the Capital’s Indira Gandhi National Centre for the Arts. Among the tiger and god masks, there’s a character from our uber-modern register— Vodafone’s Zoozoo. She smiles as she holds it up. “This is why I like tribal art...it’s the innocence and the awe factor," she says.

For tribal artists who’re entering the contemporary art realm now, this new way of looking at “our" world is a veritable process. Take for instance 38-year-old Bhajju Shyam, Jangarh’s nephew. In 2001, he published a book called the The London Jungle Book which chronicles the experiences of his first overseas trip. In his drawings, the airplane is an elephant with wings. Londoners are bats. Asked why, he says unlike in his village, where people head homewards in the evening for their meals, in London, they step out in search of a drink or meal. And they all wear black. “Bilkul chamgadar ke jaise (just like a bat)," he says.

The seeming naiveté of these observations, while making for quirky art, is one aspect of the cultural vanguardism that has kept tribal artists away from gallery spaces and the art market. The Poddars’ crusade is rooted in these concerns. “If the only outlets for tribal artists are going to be craft fairs then their viewership and buyer base is never going to go beyond a base level," says Lekha.

Last month, at a seminar conducted by Art Alive Gallery in New Delhi, panellists discussed factors that were making this market switch problematic. “Folk and tribal artists aren’t the ones who’ve been slow in catching us, we’ve been slow in recognizing them," said curator Yashodhara Dalmia.

However, a number of interventions are helping turn this around. Mumbai galleries Chemould and Pundole held tribal art exhibitions last year. Delhi gallery, W+K Exp, hosted an exhibition of Gond sculpture called Dog Father, Fox Mother, their Daughter & Other Stories that concluded in May. This was the first year that Sotheby’s included Indian tribal art in its auctions. A painting by Jangarh realized $31,250 (Rs 14.5 lakh) in September, more than doubling Warli artist Jivya Soma Mashe’s standing record of $13,600.

In a final nod of approval from the art market, the next edition of the India Art Summit (20-23 January) will host its closing party at DAF, with a live performance to highlight their ongoing show.

Gond art from Madhya Pradesh has been at the forefront of this renewed beat. Ever since Jangarh, a young boy from Patangarh, translated his tribe’s oral tradition to paper and canvas, it has had a slow but definitive ascent. International interest in Gond art peaked after Jangarh’s controversial suicide in Japan in 2001, and it has now surpassed Warli and Madhubani traditions in terms of demand.

Though it doesn’t feature his works, an ongoing group show of Gond art at Art Alive Gallery is aptly titled Jangarh Kalam after the man who started it all. The show brings together the four most talented Gond artists: Durga Bai Vyam, Bhajju Shyam, Ram Singh Urveti and Jangarh’s son, Mayank Shyam.

The Vernacular show at DAF, however, will go beyond the au courant Gond idiom—to explore makers of folk, tribal and traditional art from across the country, ranging from leather puppets from Andhra Pradesh to wooden masks from Chhattisgarh. The exhibition aims to foreground the diversity and contemporary relevance of vernacular artists and initiate fresh public discourse. It will showcase a number of innovations to achieve this, such as a digital pichwai by a third-generation pichwai painter Kapil Sharma, a graduate of the National Institute of Design in Ahmedabad.

The Vernacular show promises to be a landmark in the vernacular-contemporary debate; the debate that folk and tribal artists are not innovators and hence not artists in the true sense. After the success of the London Jungle Book, Bhajju Shyam recalls being told off by an artist in Delhi: “You’re a craftsman, not an artist."

The raison d’être of tribal art is that in an age of digital imaging and virtual installations, they seem handmade. They’re the farmers’ market equivalent of cling-wrapped fruit. Walking through the three-room gallery space of Art Alive is an introduction to a world far removed. Urveti’s canvasses show a world in harmony where the animals are always in pairs, the sun and moon are two sides of one another. His artwork is graciously in touch with the world. It would make sense, for all his exhibitions and fame, Urveti, who won a national award in 1998, continues to work for daily wages at a Bhopal museum.