A film on khap panchayats and honour killings is set to hit theatres on Friday. Khap, which features such powerful talents as Om Puri and Govind Namdeo, deals with the clash of beliefs. Its director, Ajai Sinha, spoke with us on phone. Edited excerpts:

Tell us a little bit about the film.

Khap takes its inspiration from the many newspaper stories that documented the atrocities that took place at certain places at the hands of a few people. We have all read and heard about them. The film is about the clash of different beliefs and their fallout. I have made an earnest attempt to show three different characters and their corresponding attitudes in the film: Govind Namdeo as the staunch believer in the khap system, Om Puri, who decided to change, and Manoj Pahwa, someone living within that society but who has never believed in the commonly held belief and stigma. Interwoven into these different beliefs is a love story that is sucked into this whirlpool.

When and how was the idea of making a film on the ‘khap’ conceived and developed? 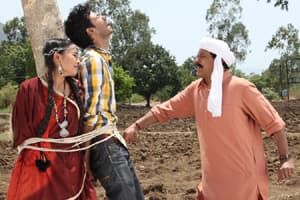 Tell us a little bit about your journey in cinema.

Well, I have been associated with theatre for a long time, even while I was working at the Central Water and Power Commission in Delhi. When I moved to Mumbai, my passion followed me here, and my earlier interest in acting soon transformed into a desire to direct and write my own films. I made my directorial debut in 2005 with Stop. Khap is my first home production.

Now that you have completed the film, has your perception of the ‘khap’ system undergone a change too?

See, initially the khap was conceived to establish and sustain a sense of brotherhood within the community. A few elders would listen to petty disputes and solve them quickly, in order to maintain solidarity within the community. But now, how can they intervene in a couple’s decision to marry? They are adults and the decision is consensual. Fundamentally, the root cause of this degradation is misinterpretation. In the early days, the village elders simply wished to remind the people that all of them are brothers and sisters to each other in the village. Now they bar anyone from marrying someone within the village or even a neighbouring village. It’s pretty common to see people on the verge of turning 40 unmarried out there. See, if you trace everything back to its source, then, logically speaking, we are all brothers and sisters. We won’t stop marrying because of that.

Do you have any plans for screening this film before members of the ‘khap panchayats’?

The film has been doing a lot of travelling lately. It received applause at the hands of the audience in Germany during the Indian Film Festival at Stuttgart. I have also shown it to a few people who have been trying to bring about a change within this system. As far as the khap members are concerned, I hope they go to see my film, because I have tried to incorporate all sorts of perspectives within my narrative.