Home / Leisure / A month to the marathon
Back
Share Via

A month to the marathon

A month to the marathon

With 11,000 people running the half marathon in Mumbai on 17 January and 3,000 more running the marathon, the numbers are steadily increasing from the 3,000 half-marathoners and 800 marathoners who ran in the first Mumbai marathon in 2004. Most of the runners are not professional athletes. Many began running just three or four years ago. They work long hours, just like you, in high-pressure jobs.

Listen to coach Savio Desouza from Mumbai, who tells us why running in a group is the best way to train for a marathon

That profile fits these three Mumbai CEOs we spoke to. They are going after their personal marathon goals with the same dedication that they bring to work. And perhaps you could take a page out of their book as you train for your run this year. Or find inspiration to follow in their footsteps next year... 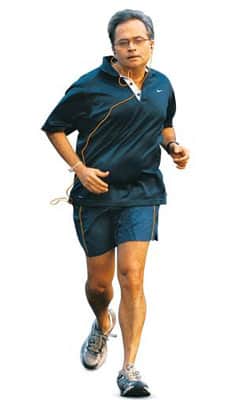 Began running: In August 2005. Sheth ran his first half marathon in Mumbai in 2006 and has participated regularly in the half marathons in Delhi and Mumbai ever since.

Motivation: “I enjoy running outdoors. I do sometimes run on a treadmill, but I don’t really enjoy it. When I run, the whole day goes on great. You feel energetic, you feel alive. Nothing will give you the high you get out of a good run."

Training schedule: He runs three days a week (Mondays, Wednesdays and Fridays), at 6am. On Mondays, his 9-10km run begins at the National Centre for Performing Arts (NCPA), Mumbai. On Wednesdays, he interval trains (warming up, cooling down and running slower in between fast runs) in Mumbai’s Priyadarshini Park, running a fast 8km, with an additional 2km at a slower pace. Fridays is typically a long run, beginning at NPCA for 12km in the first week of training, then increasing the distance each week until he’s running 21km to Worli, till Mela restaurant.

Sheth continues to train all year round. Once the marathon is over, he will pace down to smaller runs of 9-10km three times a week, going down to 8-9km through the summer; then up to 12km in the monsoon, until he starts training for the next marathon.

Next year, he also plans to run the Paris marathon on 11 April. So training till then will be more rigorous, with fewer small runs. Sheth plans to run at least three half-marathons a year in future.

Breakfast bowl: Sheth does not eat before his morning run. His after-training breakfast consists of a two-egg-white omelette.

Running gear: Saucony’s running shoes. Also, having an iPod while running is a must, and he listens to “Bollywood, Hollywood, anything to keep me going".

Team support: Sheth’s love for running has encouraged his colleagues to take up the challenge too: 35 of GE Shipping’s 240 employees will run the 21km Mumbai Marathon next month.

The extra mile: Sheth avoids alcohol for five days before the marathon. 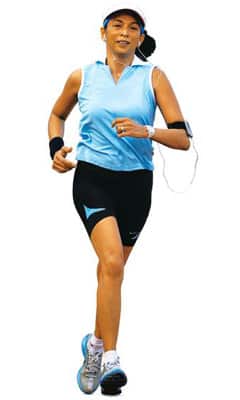 Motivation: “Basically, you need to love running. It’s almost an addiction. It makes me feel I have achieved something. Every time I run a long distance (race), I feel I can now conquer anything. For me, it’s really a big thing to finish the 21km; it’s a test of your own mind. After the 18km you really feel like death, but you just tell yourself you have to do it."

Training schedule: Initially Nanji could run only 4-5km at a time. “I thought that’s my age and all," she says. But after joining a running group with coach Savio D’Souza (see left), she found her distances and timing increasing. “Savio said, ‘Rubbish, it’s nothing to do with your age. You can do it’," she says. “And then I saw a girl, (a) little older than me, always winning the gold medal. I said, if she’s there and she can do it, I can try. So I gradually increased my distance."

For the last three years, Nanji has been training four months a year leading up to the Mumbai marathon in January. Her schedule begins at 6am, but the programme varies over the week. Her running group trains on Mondays, Wednesdays and Fridays. On Mondays, they do a 9-10km run. Wednesdays are spent in interval training: high-speed runs alternated with jogging or walking, covering a distance of 8km. Fridays are reserved for the long run, beginning with 12km in October and gradually increasing the distance every week till she hits 18km. Between the running days, she practises yoga on Tuesdays and Thursdays. Nanji spends the weekends at her house in Kashid, near Mumbai. Here she swims, does yoga and runs on the beach daily.

Breakfast bowl: A banana and a spoonful of honey before running. A big breakfast after the run: a bowl of porridge, an omelette made with two egg whites, fruit juice, a bowl of papaya, almonds and tulsi chai (holy basil tea).

Running gear: A pair of blue-and-white Nike LunarGlides. Nanji finds these shoes, each of which weighs only 75g, incredibly light. No other special gear, “except of course my iPod—I’m lost without it", she says.

Team support: Not many people at Ambiance Publicis or Red Lion run. Or even Nanji’s family. “My husband and two kids think I’m a bit crazy with all this running." 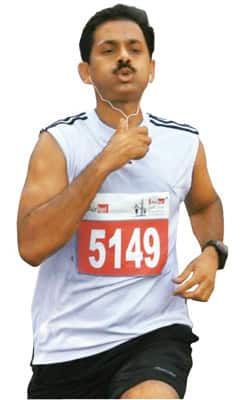 Motivation: Vaidyanathan runs for charitable causes. The Mumbai marathon website lists Vaidyanathan as one of the largest contributors to charity. “Every time I run, I run for a charity," he says. “I am supporting three charities—Bal Asha Orphanage, Sankara Nethralaya and Apnalaya." Vaidyanathan raised Rs13 lakh last year for his charities.

Training schedule: Vaidyanathan runs four days a week, all year round. It’s always in the morning, as he says, “Any corporate executive’s life is busy—work pressure...and so on. But mornings are usually in our control. I never bank on evenings (for training or exercising), because (time) may not be in our control."

Vaidyanathan starts early on weekdays, at 6am, irrespective of how much sleep he’s gotten the night before. He goes running any three weekday mornings. The other two days, he says, he often ends up travelling or going into office early. On his run days, Vaidynathan starts at 6.30-7am, covering a distance of 5-7km. This is followed by half an hour of weight training. Sundays begin earlier, at 5.30am, with a 21km run from NCPA to Worli Sea Face in Mumbai.

Breakfast bowl: Milk, oats and fruit. Vaidyanathan says he avoids junk food and has a high-protein diet. He does not smoke or drink.

Running gear: Any good running shoes work for this CEO. He says brands don’t really matter. One thing he cannot run without is an iPod.

Team support: Many employees of ICICI PruLife have now taken up running and will be participating for the Mumbai Marathon. Vaidynathan believes, “Running makes fitter employees and gives them discipline. It’s good for everybody."

The extra mile: Discipline and commitment. “There’s no secret to running the marathon," he says, “It’s an overall discipline. Don’t smoke. Don’t drink. Wake up at 6am. And run. Frankly, it’s not such a big deal. (If) you go overseas, you find significantly busy people who have a sports streak. If the president of the US can play basketball and golf, why do we make such a big deal about finding the time for sports?"